Well, this is the week for distant galaxies, isn’t it? Not only has JWST revealed some of the most distant ones ever seen in infrared, but other observatories are studying them, too. Astronomers at the Cosmic Dawn Center in Copenhagen recently discovered several interesting ones in the early Universe. However, they had to get through clouds of dust to do it. Their observations revealed several interesting characteristics of objects that existed when the Universe was only a tenth of its current age.

Piercing the Dust with Radio Observations

The Cosmic Dawn team, led by astronomer Shuowen Jin, wanted to measure star formation rates in the early universe. Team members were particularly interested in early compact galaxies. One characteristic of these objects is that they have very high stellar densities. But, those dust clouds made measuring them very difficult. The team knew that searching them out would be tough using conventional observations.

So, they decided to use radio astronomy techniques to “cut through” the dust. The ones Jin and the team discovered were bursting with star formation. All those stars created dust in the form of particles of carbon, silicon, oxygen, and iron. That’s what was shrouding the galaxies, making them difficult to observe. 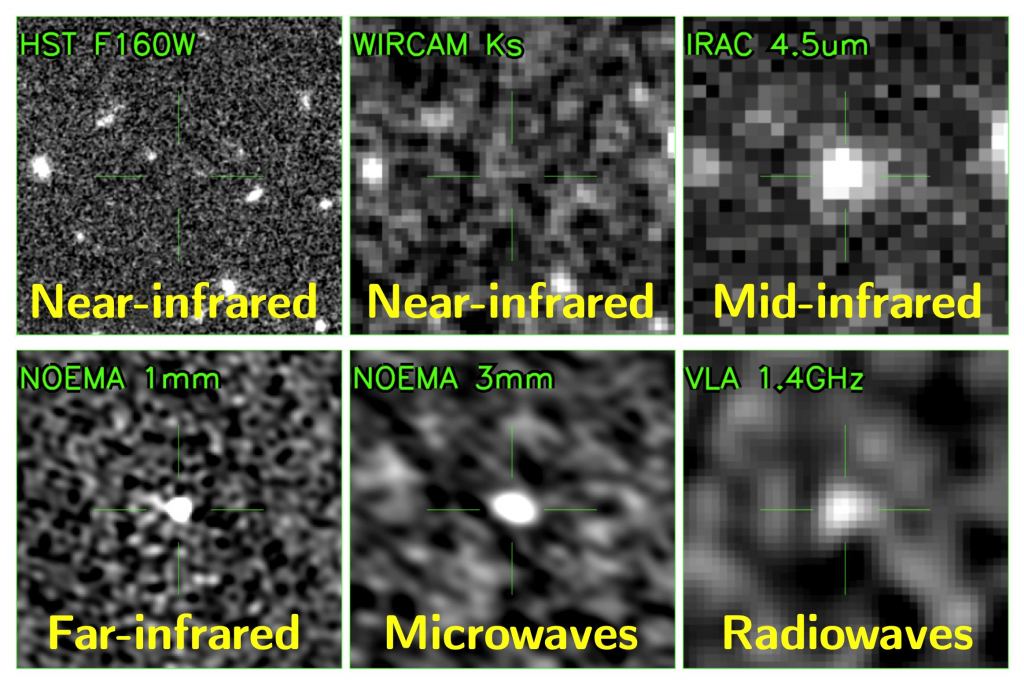 Six different views of the same galaxy (ID12646), seen less than a billion years after the Big Bang in the early Universe, at progressively longer wavelengths. The two first images show — or rather do not show — the galaxy in the near-infrared; the galaxy is completely invisible. Only when looking at the longer wavelengths is the galaxy revealed Credit: Shuowen Jin / Peter Laursen.

ALMA and NOEMA to the Rescue

“In these epochs, 1–2 billion years after the Big Bang, galaxies like these contributed significantly to the total star formation rate of the Universe,” said Jin in a press release statement. “But they pass unnoticed in optical and near-infrared observations. The dust shrouds hide the galaxies, making them look dark in optical and infrared. “Because the dust clouds are so thick and dense, optical and near-infrared light cannot travel through,” he explained. “Even the far-infrared light is partially absorbed.”

The team used two of the world’s largest radio observatories to peer through the primordial dust clouds. One was the Atacama Large Millimeter Array (ALMA) in Chile, recently updated with new, more sensitive receivers. The other was the Northern Extended Millimeter Array (NOEMA) in France. The radio astronomy observations allowed the team to measure star formation rates and calculate the temperature of the dust.

Views Through the Dust

The team’s observations also uncovered something else interesting. Carbon monoxide molecules (CO) existed mixed within the dust clouds. CO is a marker that helps determine the mass of all the gas in a galaxy. It can also help astronomers probe another important quantity of galaxies, namely the mass of all their gas.

The finding of CO also helped to improve the methods by which astronomers measure gas by revealing its existence inside the cloud. Usually, astronomers observe light emitted from the surfaces of the dusty clouds. However, there is also light blocked inside the clouds.

Jin explained that taking this effect into account has rather drastic implications. “Our model accounts for the fact that even the infrared light does not escape directly from the center of the dust clouds. This shows us that previous estimates of gas masses have been overestimated by a factor of 2–3 in compact, dusty, star-forming galaxies,” Jin explained.

These dust-shrouded, compact starburst galaxies make up about ten percent of dusty star-forming galaxies in the early Universe. Why this so remains a mystery and will be the subject of further study by Jin and his team.