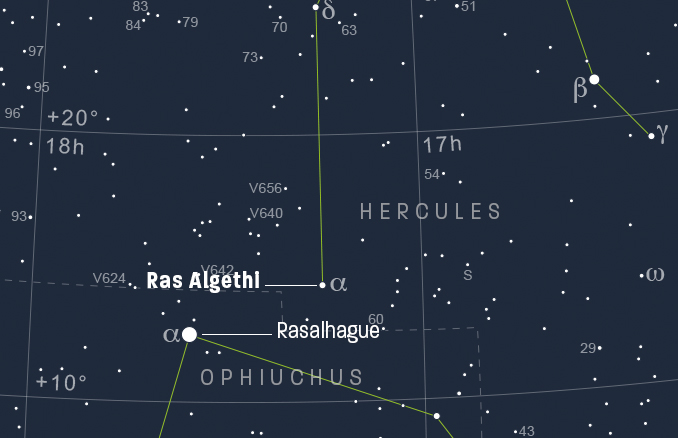 Rasalgethi (alpha [α] Herculis) is located in southern Hercules, close to its boundary with Ophiuchus.Look to southern Hercules and you’ll be thrilled to come across Rasalgethi (alpha [α] Herculis, the constellation’s lead star and a colour-contrast double star out of the top drawer. A friend once remarked they never watched classic Hollywood movies of a certain vintage as they’re all in black and white. I thought it’s a good job they’re not a deep-sky observer! Seeing colour in the deep sky is rare, as in those films shot close to a century ago, but observing double stars such as Rasalgethi, Albireo (beta [β] Cygni) and Almach (alpha Andromedae) is one way to get some colour into your life! 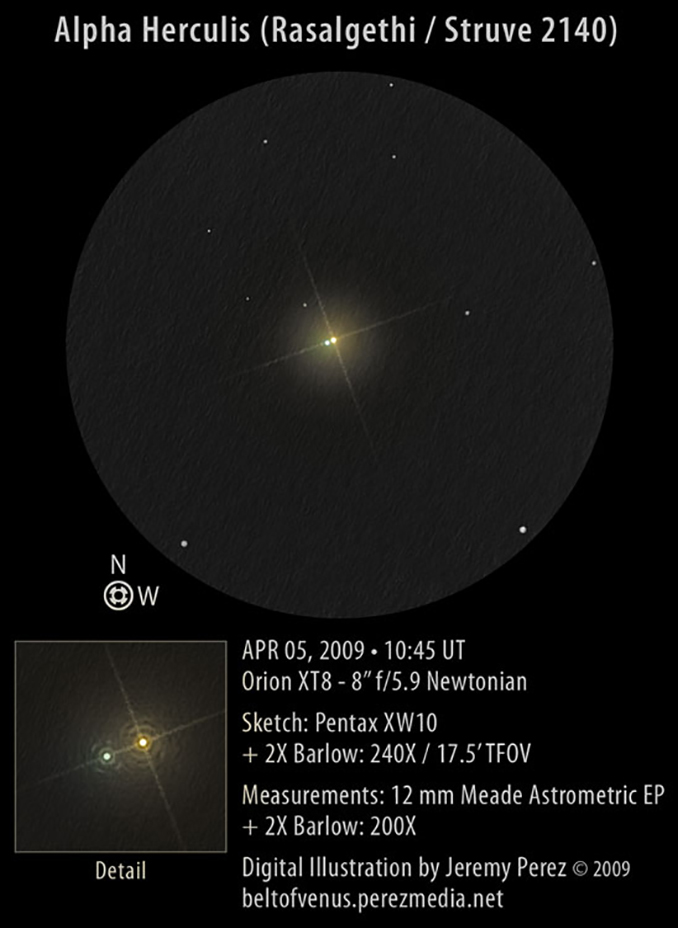 Rasalgethi is a marvellous colour-contrast binary star, with easy-to-split components, which are commonly seen as orange–red and greenish. North is up. Sketch: Jeremy Perez.

Rasalgethi is a visual binary (about 370 light years distant) with an extremely slow, 3,600-year, orbital motion. The primary star, a class-M5 red supergiant that appears orange–red, or yellow-orange, is separated by a forgiving 4.6” (with an almost east–west position angle of around 105 degrees) from a magnitude +5.4 class-G5 giant star companion that observers have reported as bluish-turquoise, sage green or bluish-green. To add to the interest, the primary is a semi-regular pulsating variable star, with a brightness ranging from around magnitude +3.1 to +3.9.

Rasalgethi’s components provide naked-eye observers with a magnitude +2.78 star that lies just inside Hercules’ southern boundary with Ophiuchus, some 20 degrees south-south-east of the centre of Hercules’ famous Keystone asterism.

Darkness now falls at about 11pm BST and Hercules is seen high in the south. Rasalgethi is 50 degrees high at this time and culminates shortly before midnight.

Five degrees east-south-east of Rasalgethi lies brighter (magnitude +2.1) Rasalhague (alpha [α] Ophiuchi), the brightest star in Ophiuchus. These two alpha-designated stars may be among the closest-lying pair of alpha stars in the entire sky. Make sure you don’t confuse the two or you’ll be scratching your head for a time! 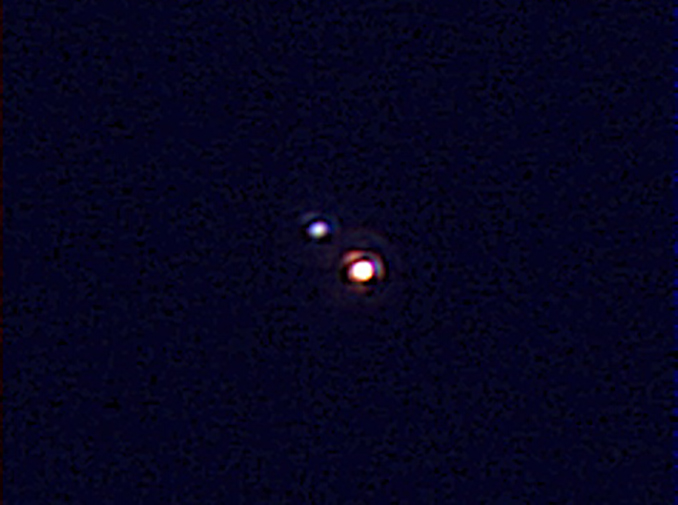 Rasalgethi’s colours are well seen in this image shot in 2004. Image: Damian Peach.