Northrup Grumman’s Cygnus cargo spacecraft conducted a successful reboost of the International Space Station over the past weekend, on Saturday, June 25, 2022. The Cygnus NG-17 “Piers Sellers” is the first US-based spacecraft to provide a substantial orbital adjustment to the ISS since the space shuttles retired in 2011. Russia’s Progress cargo spacecraft has been the primary source for station reboosts, attitude control, and debris avoidance maneuvers.

Cygnus fired its gimbaled delta velocity engine for a total of 301 seconds, raising the station’s perigee by about 0.8 kilometers (1/2 mile) and its apogee by nearly 0.2 kilometers (.1 mile) for a test of “this enhanced capability for a standard service for NASA,” Northrup Grumman said.  “This Cygnus mission is the first to feature this enhanced capability as a standard service for NASA.”

Cygnus had been docked to the ISS since February and now has departed, leaving on June 28. Back in 2018, the ninth Cygnus resupply mission conducted a test of the reboost capability by conducting a short 50 second burn of its main engine, raising the Station’s altitude by 90 meters (295 feet). The thruster firing on June 25 was actually the second attempt to raise the station’s orbit with the Cygnus NG-17, as on June 20, the maneuver was aborted after just five seconds. Northrup Grumman said the abort was triggered automatically and came as a “precautionary measure.” An investigation by engineers showed that the observed parameters were as expected and acceptable. 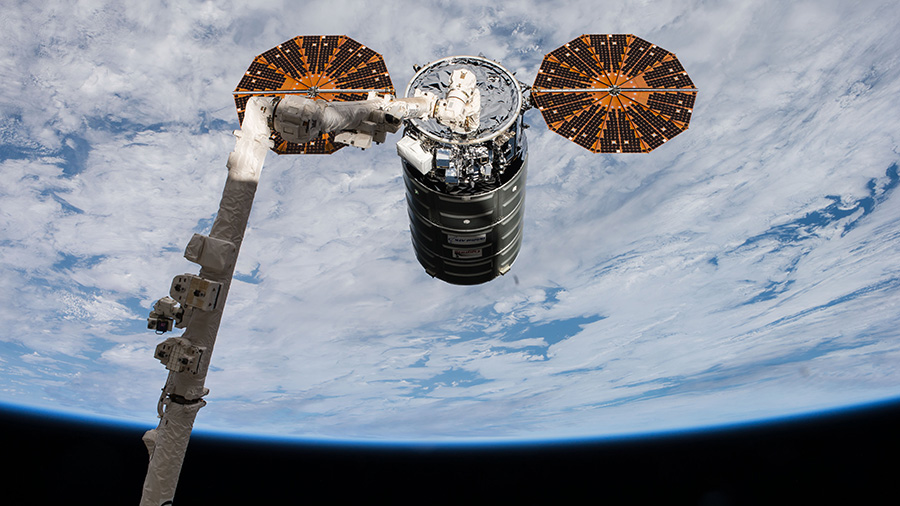 A previous Cygnus (OA-8) spacecraft is pictured after it had been grappled with the Canadarm2 robotic arm in 2017. Credit: NASA

Having US capabilities to provide propulsion to the ISS came to the fore as an issue following Russia’s invasion of Ukraine in late February 2022. After sanctions imposed on Russia by the US and other countries who are part of the space station consortium, thinly-veiled threats by Dmitry Rogozin, the Director-General of the Russian State Space Corporation (Roscosmos) indicated that Russia might be terminating its cooperation in space; he also suggested the country might use the ISS as a weapon. The Russian news agency RIA Novosti also showed a CGI video depicting the Russian modules detaching from the ISS. Other volleys on social media from Rogozin and others made for a tense few months, but tempers seemed to have cooled lately.

NASA says that normally, all International Space Station propulsion is provided by the Russian segments and Russian cargo spacecraft. A set of thrusters on the Zvezda module can be used, however, they are mainly reserved for when the Soyuz can’t conduct the task, as propellant on board the station is limited. The U.S. gyroscopes provide day-to-day attitude control or controlling the orientation of the station. “Russian thrusters are used for attitude control during dynamic events like spacecraft dockings and provide attitude control recovery when the gyroscopes reach their control limit,” NASA said.

Last night on ISS for Cygnus! Vehicle is fully loaded, hatch is closed, robotic arm has grappled it for unberthing early tomorrow morning. Thanks for bringing us supplies, for the orbit reboost and…. last but not least… for taking our trash! #MissionMinerva pic.twitter.com/HIzt7e43Nh

Of course, since Cygnus has now departed, the space station remains reliant on the Russian sources for any needed maneuvers. While the head of SpaceX has intimated Dragon capsules could help maneuver the station, they currently do not hold that capability.

Northrup Grumman said providing reboosts and thruster capabilities is the latest in a series of improvements made to the spacecraft since its first mission to the station in 2013. The company has increased the amount of cargo it can carry to the station with a larger cargo module, added lighter and more powerful solar arrays and fuel tanks, and upgraded many of its systems to make reboost possible.

So far, Cygnus spacecraft have delivered more than 5,000 kg 112,000 pounds of equipment and supplies to the astronaut crews aboard the ISS. The Cygnus vehicle was packed with garbage before undocking, and it conducted controlled reentry over the Pacific Ocean on June 29.