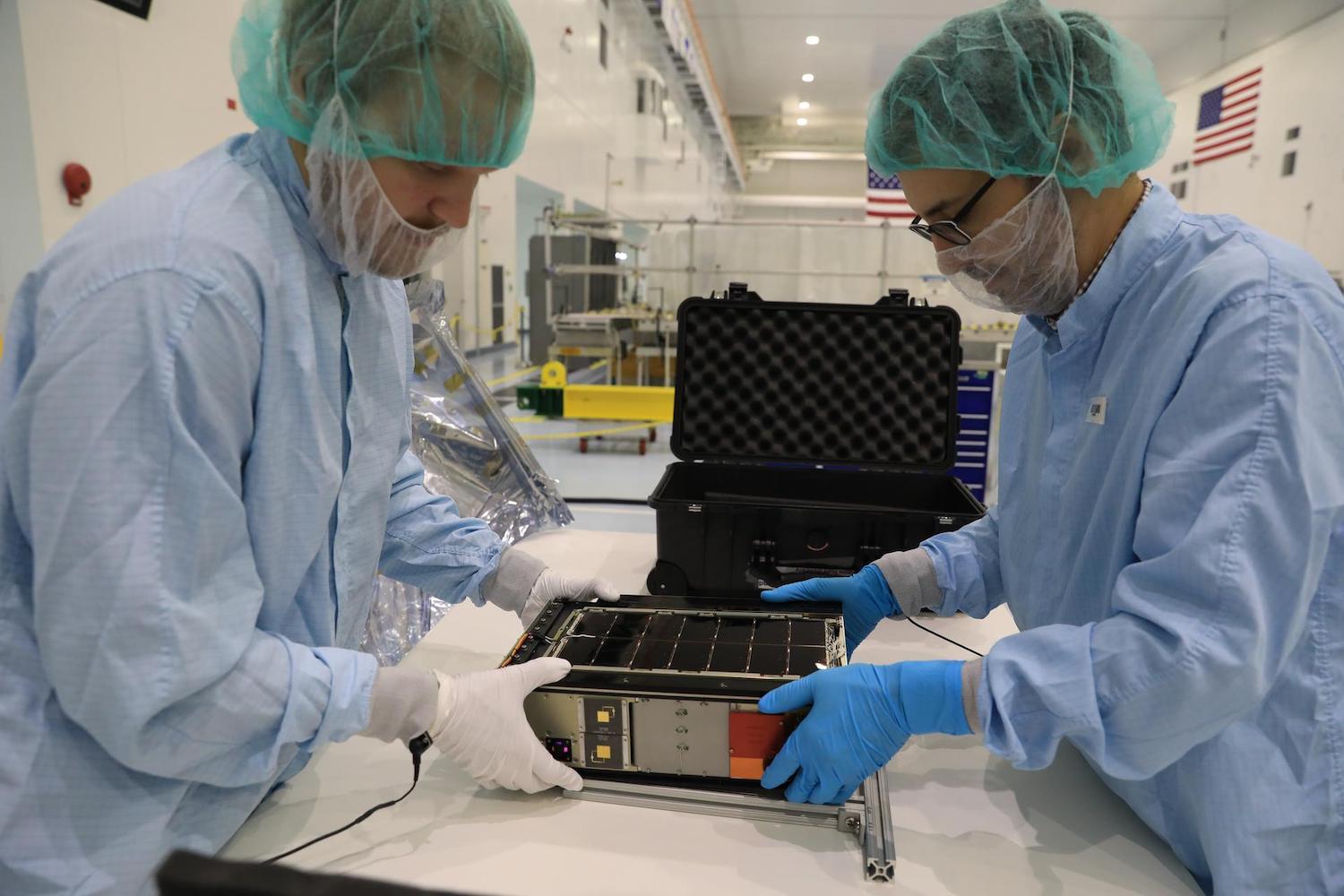 Team members work with the LunaH-Map CubeSat the Kennedy Space Center before integration with its dispenser on the Space Launch System. Credit: NASA/Kim Shiflett

The 10 CubeSats hitching a ride to deep space on NASA’s Space Launch System moon rocket promise new discoveries about the moon, space weather, and asteroids. But some of the small spacecraft will launch with their batteries only partially charged after sitting inside the rocket for more than a year.

Folded up for launch, the CubeSats are each the size of a large cereal box. They are stowed inside dispensers mounted on the ring-shaped adapter that sits just below the Orion spacecraft on top of the 322-foot-tall (98-meter) SLS moon rocket.

The behemoth launcher and Orion spacecraft are set for liftoff from NASA’s Kennedy Space Center as soon as Monday on a test flight to the moon and back. The primary goal of the mission, known as Artemis 1, is to test the new moon rocket and Orion capsule before future crew flights.

NASA is using excess capacity on the new heavy-lift rocket to launch small CubeSats, a class of diminutive spacecraft that have proliferated in orbits close to Earth to support remote sensing and communications missions. Scientists are eager to use the relatively inexpensive CubeSat design to pursue missions farther from Earth.

“Artemis 1 will test our spacecraft and hardware that we’ll use to carry astronauts to the moon,” said Jacob Bleacher, NASA’s chief exploration scientist. “Additionally, Artemis 1 will enable us to test the use of CubeSat secondary payloads that can be delivered beyond low Earth orbit.”

The SLS rocket’s solid rocket boosters and core stage will provide the initial ride to space for the Orion spacecraft and the CubeSat payloads. The SLS upper stage, derived from United Launch Alliance’s Delta 4 rocket program, will ignite its RL10 engine to place the Orion capsule and rideshare science missions on a trajectory toward the moon. 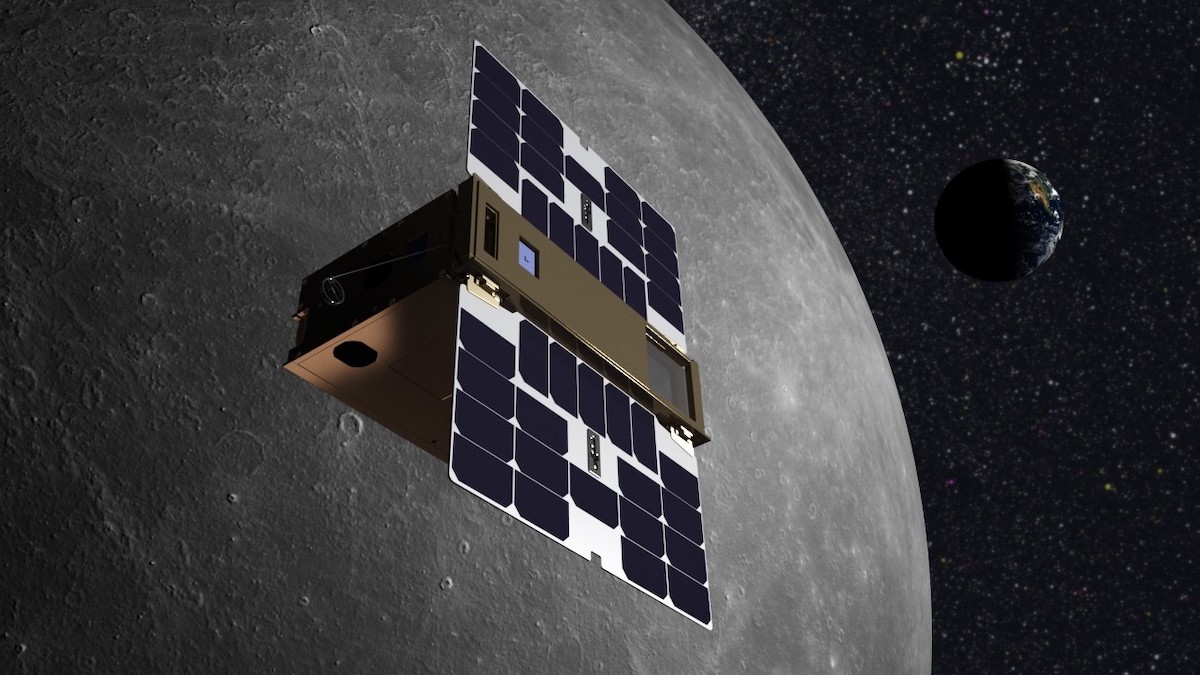 Artist’s concept of the LunIR CubeSat in orbit around the moon. Credit: Lockheed Martin

The Orion spacecraft will deploy from the SLS upper stage a little more than two hours after liftoff, then the CubeSats will separate from the upper stage one-by-one over the next few hours.

The 10 rideshare payloads are stowed inside deployers on the Orion Stage Adapter, the interface that connects the SLS moon rocket with the Orion spacecraft. The adapter was stacked on the Space Launch System last October inside the Vehicle Assembly Building at Kennedy.

The CubeSats themselves were packed inside their deployers before then. Nine of the spacecraft were installed on the adapter last July, and the final ridehsare payload was added in September.

At that time, the launch of the Artemis 1 mission was expected in late 2021 or early 2022. It turned out that the launch delayed another half-year or more, with the target liftoff date now set for Aug. 29.

The delays caused some officials to worry about the battery charge on the CubeSats. Five of the 10 secondary payloads had their batteries recharged, while the others were not topped off due to design and access constraints. In at least one case, mission officials chose not to recharge a CubeSat’s battery.

“There were several that had the capability of being recharged, and then there were several that simply did not have that capability once we are stacked,” Bleacher said. “At this point, it’s difficult to apply any more charge to those CubeSats. So we’re trying to work through preparations and get the SLS ready to fly. That’s the best thing that we can do at this point.

“The primary goal here is to fly the SLS and the Orion and check out that system, make sure that it will work, and is ready to go for Artemis 2, when we’ll have our astronauts on board,” Bleacher said. “If we get the SLS off the at end of this month or early September, we hope that they’ll all have an opportunity to be able to fly.”

“We are at the point where we’re getting ready to fly,” said Mike Sarafin, NASA’s Artemis 1 mission manager. “The remainder of those CubeSats, based on analyses we believe have sufficient charge to conduct a mission. Some may actually need to recharge after they’re deployed, after they gain some solar power through their solar arrays. But we believe each of these have a mission. 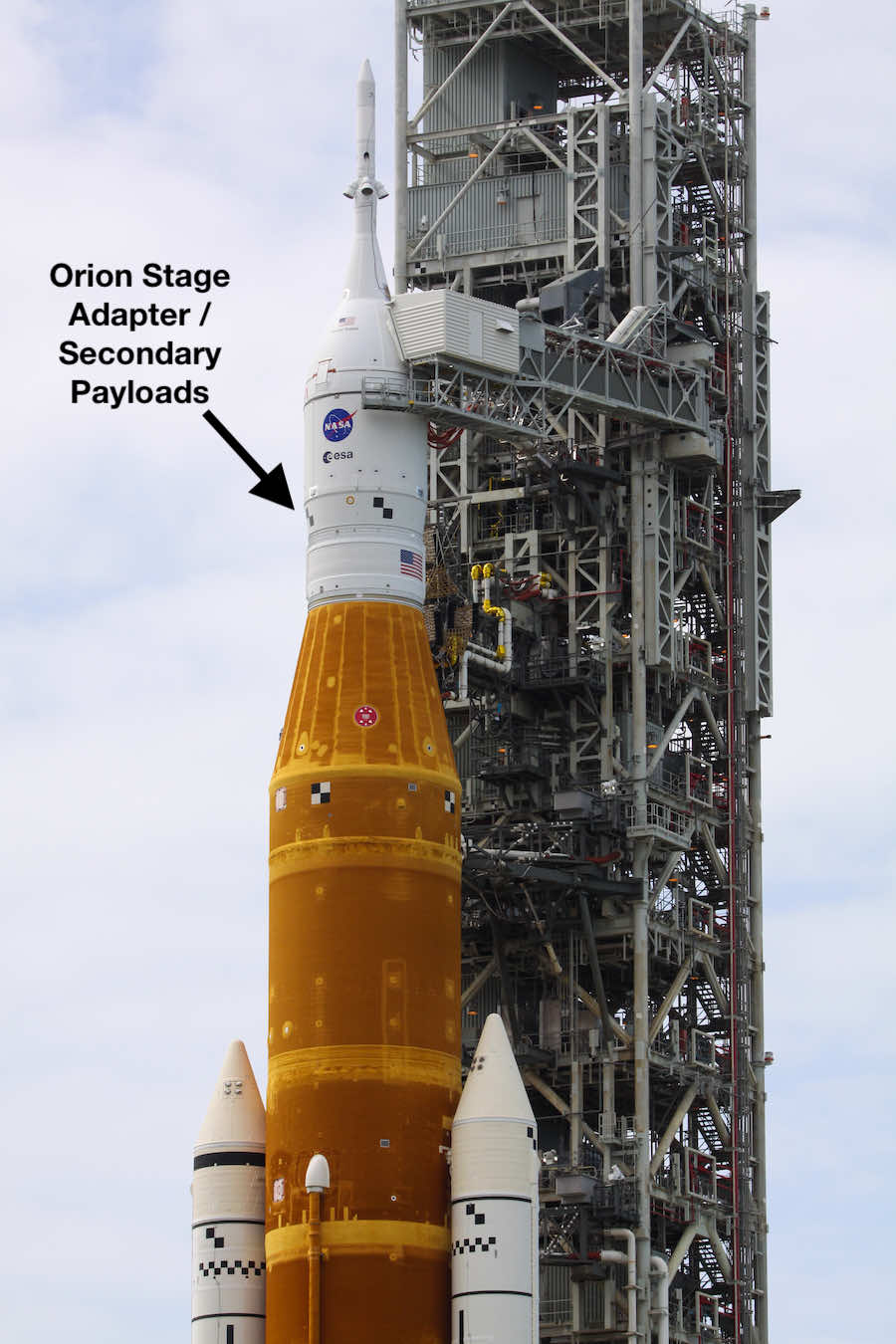 The CubeSats riding on the Artemis 1 mission are stowed inside the Orion Stage Adapter, located just below the Orion spacecraft on the SLS moon rocket. Credit: Stephen Clark / Spaceflight Now

NASA selected 13 CubeSat missions to launch on the first SLS flight in 2016 and 2017. At that time, NASA said it expected the first SLS test flight to launch in late 2018.

But three of the smallsat missions faced problems that caused them to miss their chance to fly on Artemis 1.

The 10 CubeSats that made the final cut for Artemis 1 are:

• BioSentinel: This project is led by NASA’s Ames Research Center in California, and will investigate the affects of deep space radiation on living organisms. The CubeSat carries dry yeast cells on microfluidic cards, which allow the microorganisms to be rehydrated after BioSentinel reaches deep space.

• Lunar IceCube: This mission, led by Morehead State University in Kentucky, will orbit the moon with an infrared spectrometer to investigate the presence off water and organic molecules on lunar surface and in the lunar exosphere. This spacecraft was not recharged before launch.

• NEA Scout: The NEA Scout mission will deploy a solar sail to guide itself to a flyby with a small asteroid. The small spacecraft was developed by NASA’s Jet Propulsion Laboratory and Marshall Space Flight Center.

• LunaH-Map: The Lunar Polar Hydrogen Mapper, developed at Arizona State University, will map the hydrogen content of the entire South Pole of the moon, including within permanently shadowed regions at high resolution, according to NASA. This spacecraft was not recharged before launch.

• CuSP: The CubeSat to study Solar Particles, or CuSP, will orbit the sun in interplanetary space. Developed by the Southwest Research Institute, CuSP will observe particles and magnetic fields streaming away from the sun before they reach Earth, where they can trigger geomagnetic storms and other space weather events. This spacecraft was not recharged before launch.

• LunIR: Developed by Lockheed Martin, the Lunar Infrared Imaging mission will perform a flyby of the moon to collect thermal imagery of the lunar surface. The mission will also demonstrate CubeSat technologies in deep space. This spacecraft was not recharged before launch.

• Team Miles: This privately-developed CubeSat will test a miniature plasma propulsion system in deep space. The Team Miles mission is a partnership between Miles Space and Fluid & Reason LLC, two Florida-based companies. This spacecraft was not recharged before launch.

• EQUULEUS: The EQUilibriUm Lunar-Earth point 6U Spacecraft will travel to the Earth-moon L2 Lagrange point beyond the far side of the moon. Developed by the Japan Aerospace Exploration Agency and the University of Tokyo, the mission will image Earth’s plasmasphere, observe of impacts on the lunar far side, and demonstrate of low-energy trajectory control maneuvers near the moon.

• OMOTENASHI: The Outstanding MOon exploration Technologies demonstrated by NAno Semi-Hard Impactor mission, also developed by JAXA and the University of Tokyo, will attempt a “semi-hard” landing on the moon’s surface using a solid rocket motor.

• ArgoMoon: This mission will use a small satellite to perform proximity maneuvers around the SLS upper stage after deployment from the Orion Stage Adapter. ArgoMoon, provided by the Italian Space Agency in partnership with the Italian company Argotec, will provide high-resolution images of the upper stage for historical documentation. 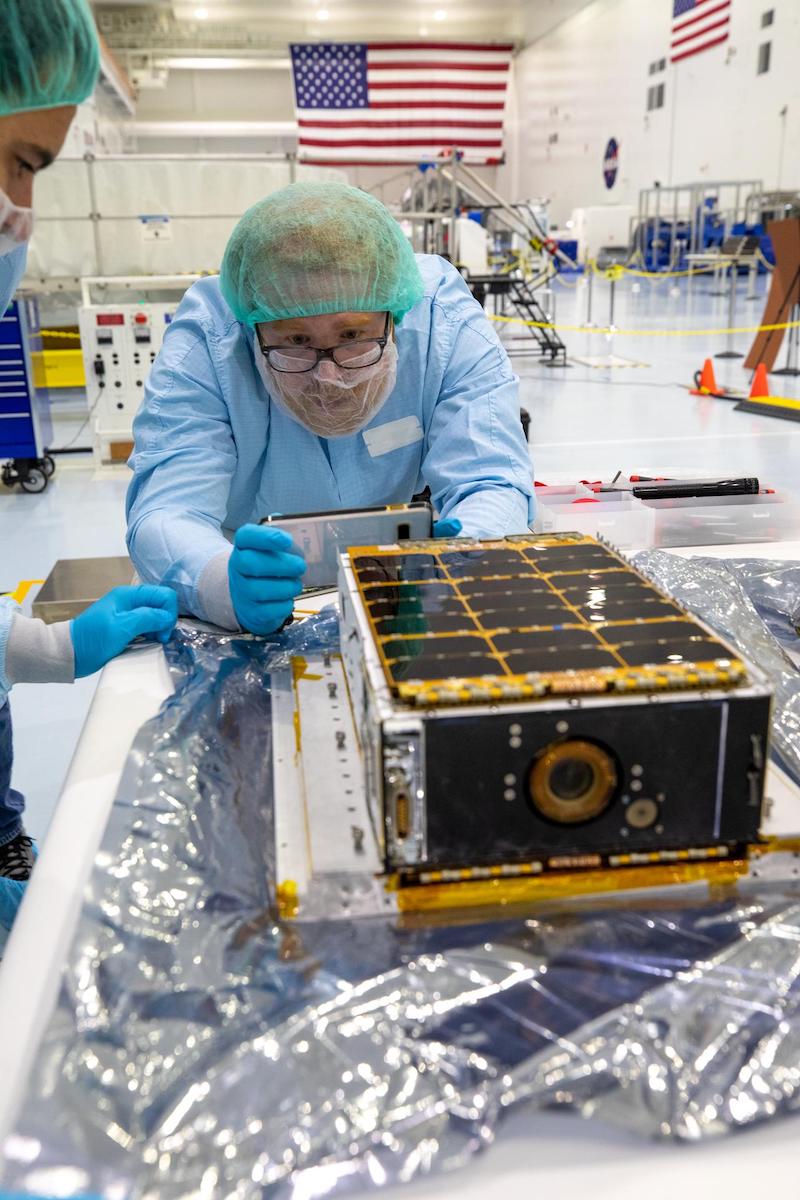 Craig Hardgrove, principal investigator for the LunaH-Map mission from Arizona State University, said SLS rocket engineers were were not “comfortable” with that CubeSat recharging while stacked on the launch vehicle. He said data on the battery’s state of charge suggest the mission “should be in a pretty good position” if the mission gets off the ground in late August or early September.

The Artemis 1 mission has backup launch dates penciled in for Sept. 2 and Sept. 5, but could theoretically launch on any day from Sept. 2 through Sept. 6, if it doesn’t take off Aug. 29.

“If we happen to be below the minimum state of charge required to boot our flight computer, we do have two enclosed solar panels after the dispenser kicks us out into space, so those two panels will charge the batteries,” Hardgrove said. “Assuming that the batteries are not depleted all the way to zero, we should be able to charge those in not too much time after deployment.

“All the CubeSats are in a slightly different situation,” he said. “But for LunaH-Map, I think we should be okay with the launch coming up.”

“We had an opportunity to charge, but we opted out of it,” Faler said. “There’s such a low discharge rate on our batteries that we figured why rock the boat and introduce introduce the variable of recharging.”

The scientists leading the Artemis 1 rideshare missions know their missions are risky. Few CubeSats have ever ventured into deep space.

“These are some of the most complex CubeSats ever produced,” said Ben Malphrus, principal investigator for the Lunar IceCube mission at Morehead State University. “In order to reach the performance levels that are required to do the science, we had to push the envelope. We had to take risks and engineers balanced those risks against the design capabilities. And it comes down to a little bit of a gamble.”

Malphrus said more than 50 students worked on the Lunar IceCube mission over more than five years of development.

“For me, this is really like a third child,” Hardgrove said. “Sending it off to the moon and getting to see it have a chance of completing its mission is really a special thing.”