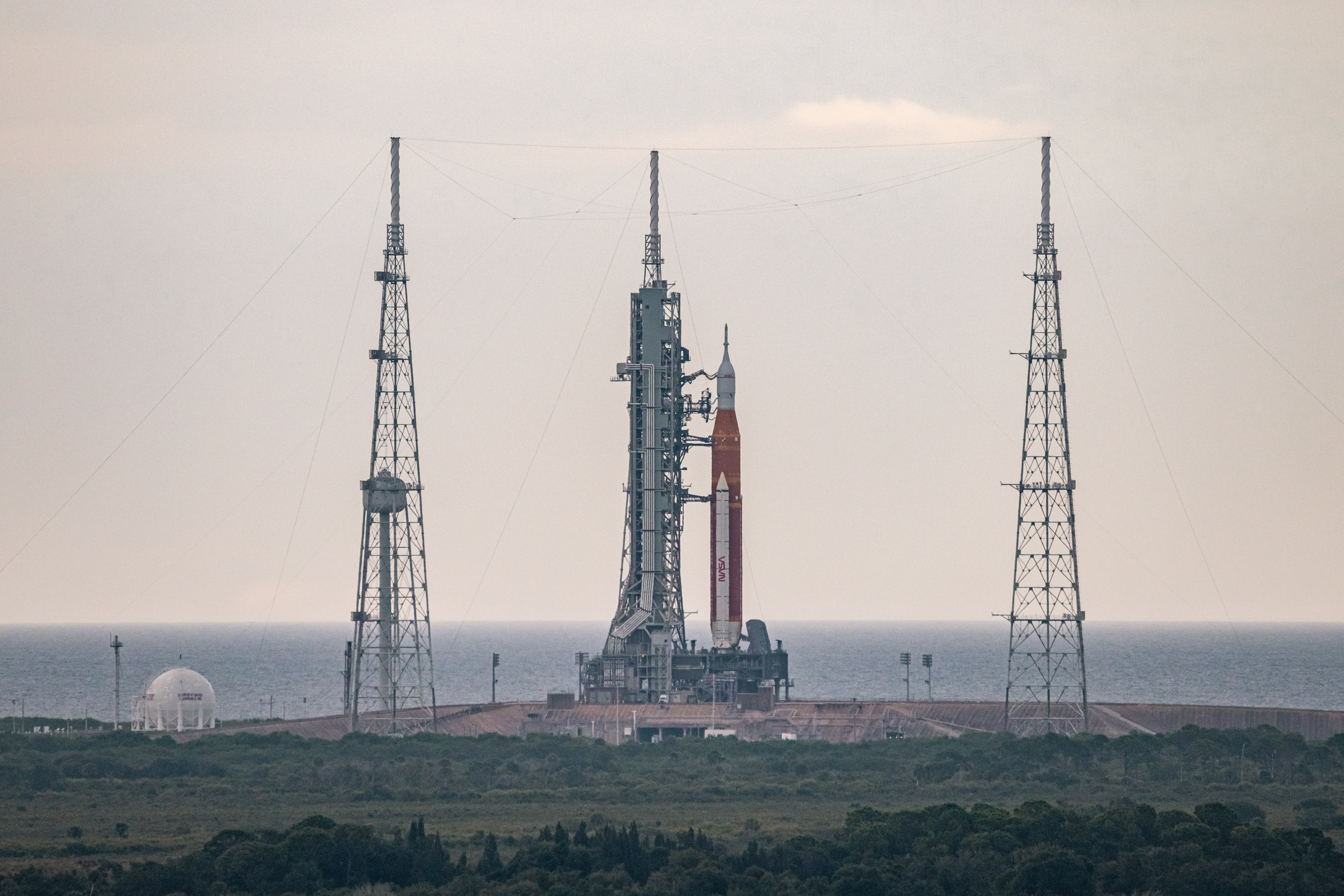 Countdown clocks began ticking Saturday for the maiden launch of NASA new Space Launch System rocket Monday on a long-awaited mission to send an unpiloted Orion crew capsule around the moon and back.

“At this time, we are not working any significant issues,” she told reporters in a pre-flight news conference. “So I’m happy to report that and everything is proceeding on schedule.”

Shortly after the briefing, lightning struck one of the three protective towers around the SLS rocket at launch pad 39B. The strike prompted a review of data to make sure no sensitive electrical systems were affected.

If all goes well, engineers working by remote control plan to start pumping 750,000 gallons of liquid oxygen and hydrogen fuel into the giant SLS rocket’s core stage at 12:18 a.m. EDT Monday, setting the stage for blastoff at 8:33 a.m., the opening of a two-hour window. Forecasters are predicting a 70 percent chance of good weather.

The unpiloted 42-day test flight of the $4.1 billion SLS rocket and Orion crew capsule is a major milestone in NASA’s push to return astronauts to the surface of the moon for long-term exploration and to test equipment and procedures needed for eventual multi-year flights to Mars.

“With the Artemis 1 launch on Monday, NASA is at a historic inflection point, poised to begin the most significant series of science and human exploration missions in over a generation,” said Bhavya Lal, NASA associate administrator for technology, policy and strategy.

“We are making sure that the agency’s architecture for human exploration is grounded in a long-term strategic vision, that of sustained U.S. presence on the moon, Mars and throughout the solar system.” 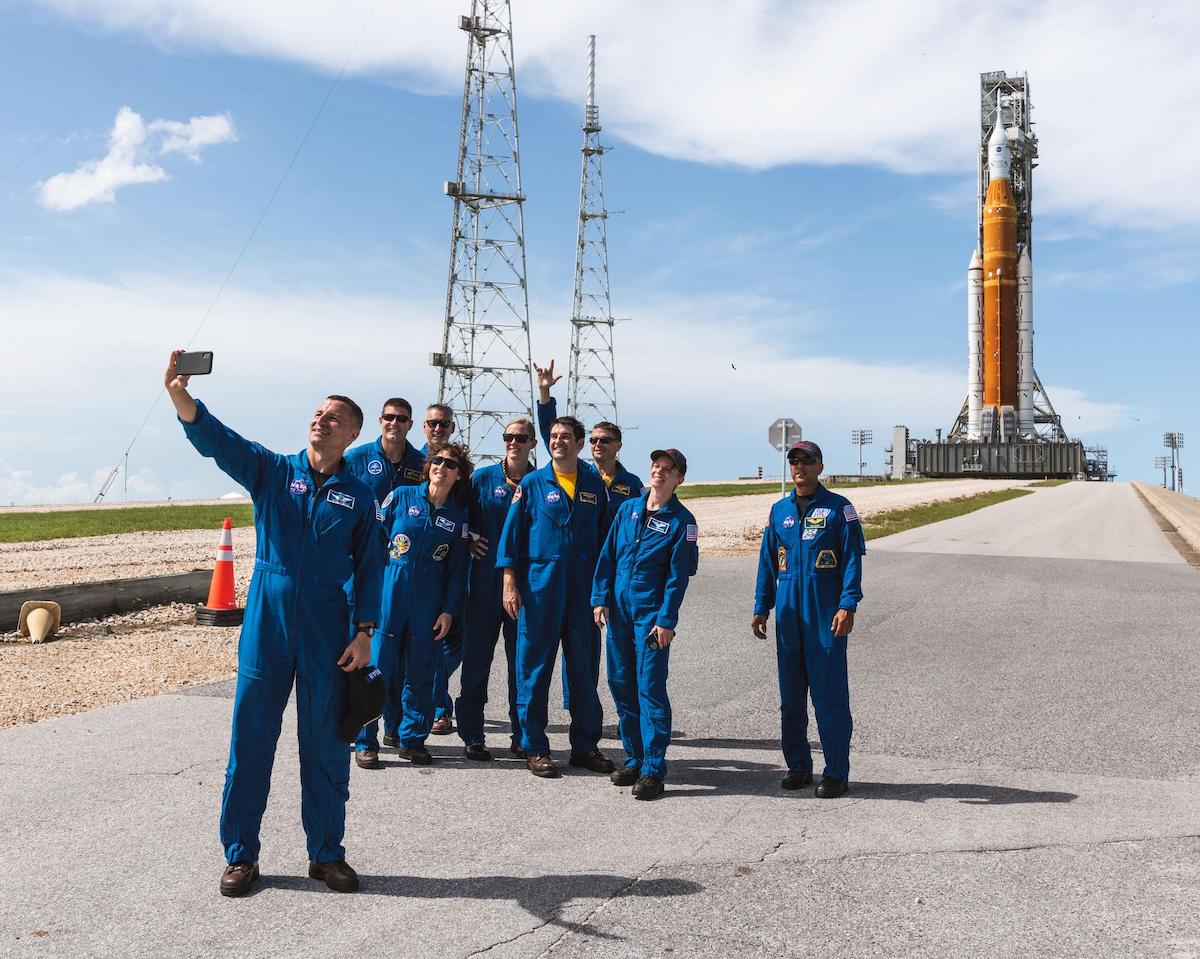 But mission manager Mike Sarafin cautioned “this is a test flight. We’re mindful that this is a purposeful stress test of the Orion spacecraft and the Space Launch System rocket. It is a new creation, it is a new rocket and a new spacecraft to send humans to the moon on the very next flight.

“This is something that has not been done in over 50 years and it is incredibly difficult. We will learn a great deal from the Artemis 1 test flight. … We understand that there’s a lot of excitement about this, but the team is very focused.”

One question mark going into the countdown is the status of a 4-inch liquid hydrogen quick-disconnect fitting that leaked during a practice countdown and fueling test June 20.

The fitting was repaired after the rocket was hauled back to NASA’s assembly building. But hydrogen leaks typically don’t show up unless the equipment is exposed to cryogenic temperatures — in this case, minus 423 degrees Fahrenheit — and that won’t happen until around 3:30 a.m. Monday when fueling is well underway.

If a leak is detected that violates safety standards, launch will be scrubbed. But Blackwell-Thompson says she’s confident the fitting will work normally.

“You don’t really get the full test until you do it at cryogenic conditions,” she said in an interview. “We believe that we have done everything to correct this issue, and certainly on launch day, as part of our loading, we will know for certain.”

The primary goals of the Artemis 1 mission are to verify the giant SLS rocket’s performance, to put the Orion crew capsule through its paces and to bring it safely back to Earth, making sure the capsule’s 16.5-foot-wide heat shield can protect returning astronauts from the high-speed heat of re-entry.

An instrumented, spacesuited mannequin — “Moonikin Campos” — and two artificial female torsos will help scientists measure the radiation environment of deep space, along with the vibrations, sound levels, accelerations, temperatures and pressures in the crew cabin throughout the mission.

If the flight goes well, NASA will press ahead with plans to launch four real astronauts on a looping free-return trajectory around the moon in late 2024, followed by a mission to land two astronauts near the moon’s south pole as early as 2025.

That flight will depend in large part on continued funding from Congress, development of new spacesuits for the moonwalkers and SpaceX’s progress developing a moon lander based on the design of its futuristic Starship rocket, which has not yet flown to space.

NASA managers say they’re optimistic, but it’s not yet known how realistic the 2025 landing target might prove to be.

“We’re working as if it is. We have to, otherwise it ends up being an open-ended question that we never reach,” said astronaut Randy Bresnik, adding SpaceX is “working towards that pace as well.”

“And so that gives great hope that if we’re going to get there, we’ve got the right partner for this first mission. The suits and the Starship, the lunar lander, all go hand in hand. We can’t have one without the other. So we’ll get more clarity in the next few months.”