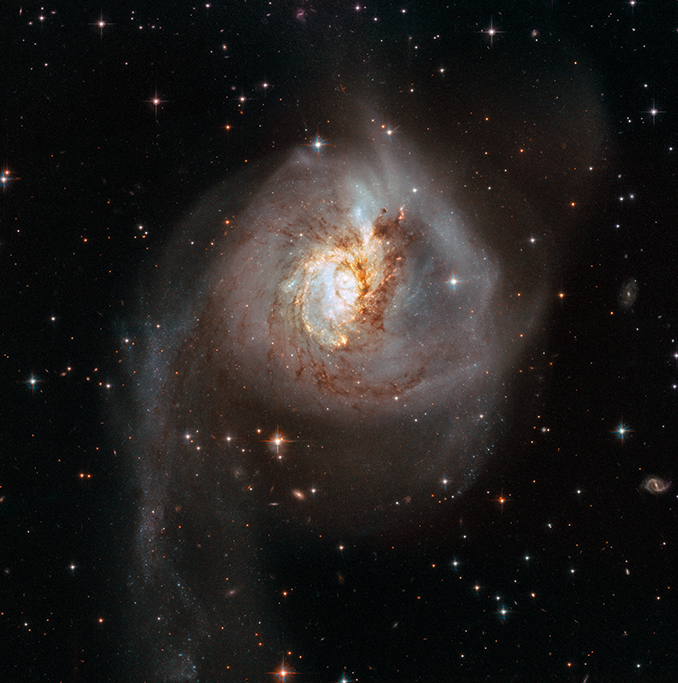 The galaxy NGC 3256 is seen here in the aftermath of a major galaxy merger. Observations show that NGC 3256 contains a double nucleus, each the remnant of the core of one of the galaxies that collided, and each likely home to a supermassive black hole, which will merge with each other sometime in the future. Tidal tails of gas, pulled out from the collision by the mutual gravity of the galaxies as they approached one another, stretch away into intergalactic space. And, with the gas of the two merged galaxies now all stirred up, stars are forming at a high rate in an event we call a ‘starburst’.

This Hubble Space Telescope image was captured with the intent of learning more about how stars form in the extreme conditions following a galaxy collision. In particular, Hubble has been able to resolve bright knots of star-formation in NGC 3256 as young, compact star clusters, allowing astronomers to better understand how such star clusters form and evolve.

NGC 3256 lies in the constellation of Vela, the Sails, at a distance of about 100 million light years, and is a member of the Hydra–Centaurus supercluster. This is the nearest galaxy cluster to the Virgo supercluster, of which our Milky Way Galaxy and our Local Group of galaxies is a part. Image: ESA/Hubble and NASA.