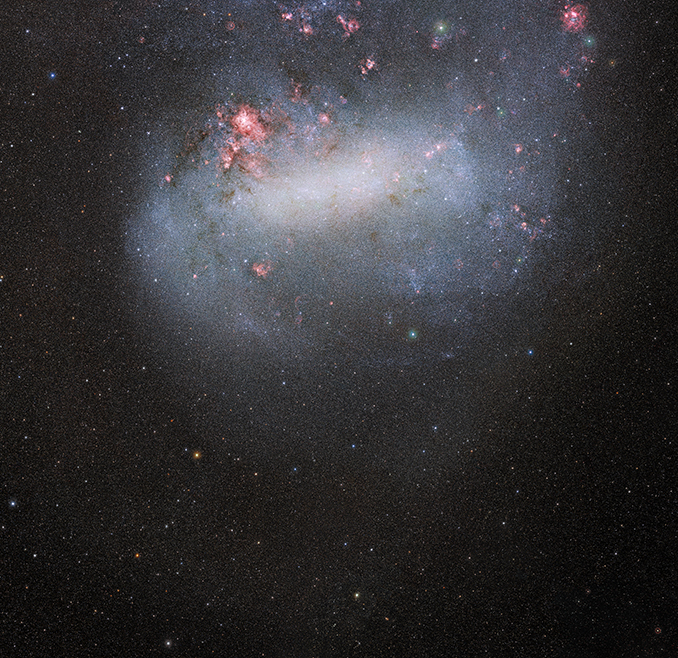 The greatest survey yet of the Milky Way Galaxy’s two main satellites, the Large and Small Magellanic Clouds (LMC, left, and SMC, above), has resolved an astonishing 360 million objects – stars, clusters and nebulae – showing these two dwarf galaxies in unprecedented detail.

Visible in the night sky from the Southern Hemisphere, the LMC and SMC are about 163,000 and 200,000 light years distant, respectively – a long way, to be sure, but just a stone’s throw compared to the Andromeda Galaxy, which is 2.5 million light years away. Despite their diminutive size – they are just 14,000 and 7,000 light years across, respectively – they are forming stars at a high rate, particularly the LMC, which has a star-forming region named 30 Doradus or the Tarantula Nebula (at top left in the LMC image)that is the most intense star-forming region in the entire Local Group of galaxies.

These detailed images were taken using the 520-megapixel Dark Energy Camera (DECam) on the Victor M. Blanco four-metre telescope at the Cerro Tololo Inter-American Observatory in Chile, as part of the Survey of the MAgellanic Stellar History, known as ‘SMASH’ for short. As the camera’s name suggests, it ordinarily observes more distant galaxies as a means of measuring the strength of dark energy that is accelerating the expansion of the Universe. However, DECam’s superb resolution and large field of view made it perfect for taking in the large expanse on the sky of the Magellanic Clouds. Images: CTIO/NOIRLab/NSF/AURA/SMASH/D. Nidever (Montana State University).