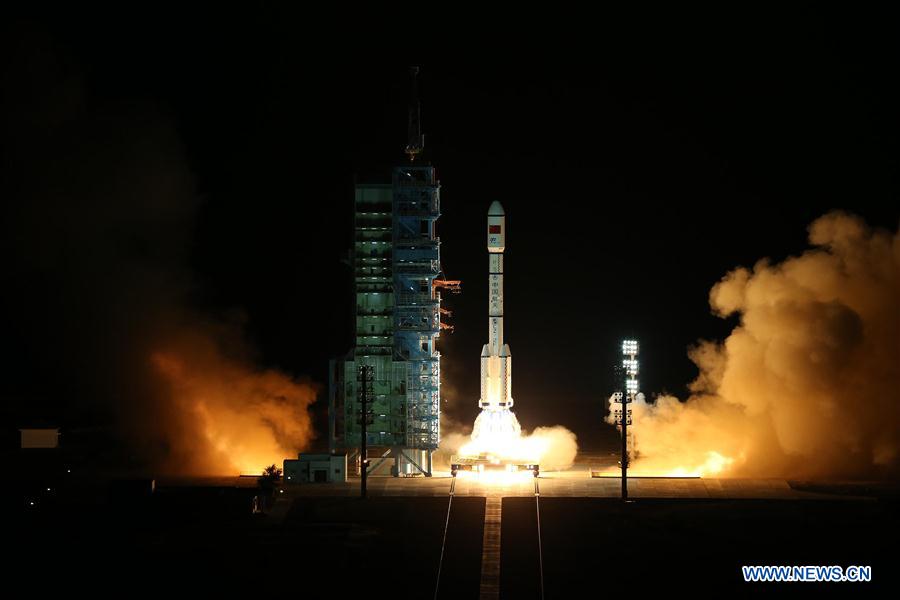 A reusable Chinese spacecraft that may resemble the U.S. military’s X-37B spaceplane has logged 10 days in orbit since its Aug. 4 launch, but what it’s doing remains a mystery.

The spacecraft launched from the Jiuquan space center in the Gobi Desert on top of a Chinese Long March 2F rocket around 1600 GMT (12 p.m. EDT) on Aug. 4, flying inside the launcher’s aerodynamic nose cone. The liquid-fueled rocket, which is typically used to launch astronaut crews into orbit, deployed the mysterious Chinese spacecraft into an orbit ranging between 215 miles and 368 miles (346-by-593 kilometers) in altitude with an inclination of 50 degrees to the equator.

China’s state-run Xinhua news agency called the payload a “reusable experimental spacecraft” in a brief statement after the launch.

“After a period of in-orbit operation, the spacecraft will return to its scheduled landing site in China,” Xinhua said. Chinese officials said the mission will test “reusable technologies and in-orbit service technologies” to support the “peaceful use of space.”

But the secretive nature of the mission suggests a military purpose.

Beyond the short statements from the Chinese government, little is publicly known about the mission, which follows a similar test flight in 2020 that lasted two days. International observers believe the spacecraft that flew in 2020 landed on a runway at a remote military airbase near China’s Lop Nor nuclear test site in the Taklamakan Desert of northwestern China.

The reusable spacecraft left an object behind in orbit before re-entering the atmosphere and landing. Analysts speculated it might be a service module, a power and propulsion package, or a subsatellite released from the test spacecraft. 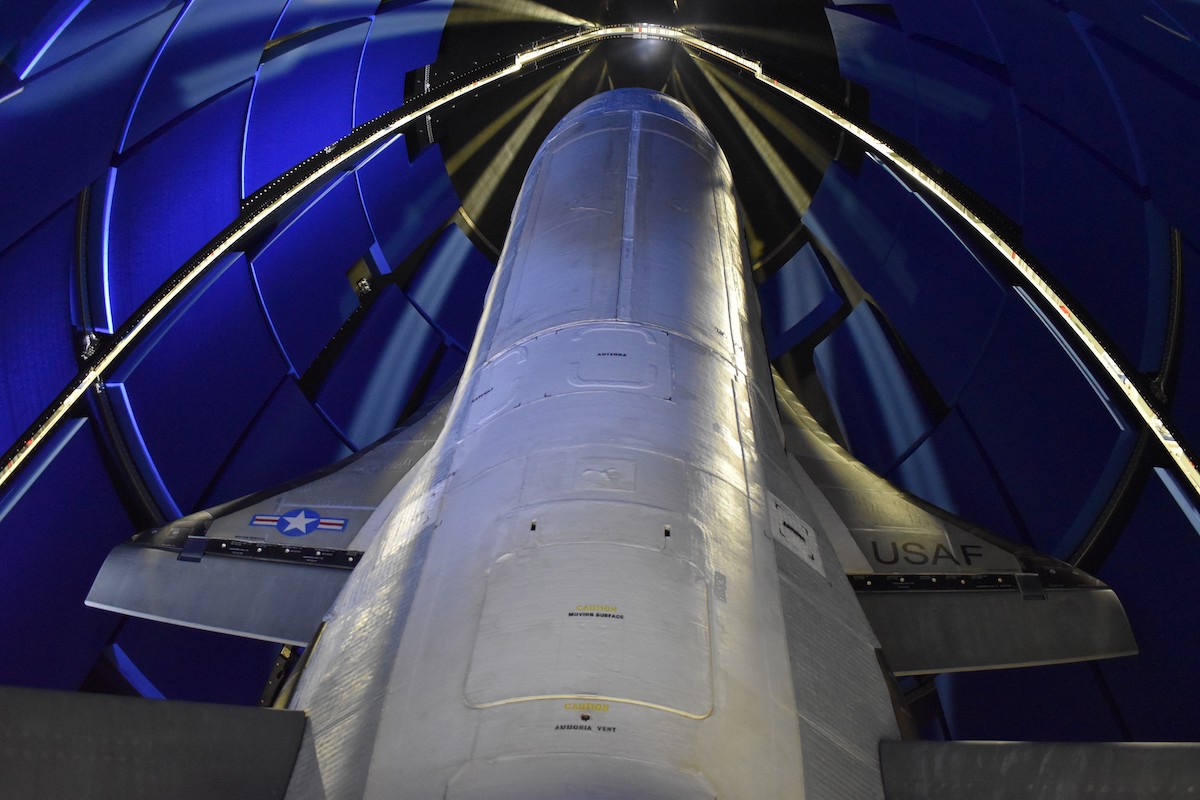 An X-37B spacecraft is encapsulated inside the Atlas 5 rocket’s payload fairing inside a processing facility at NASA’s Kennedy Space Center in Florida. Credit: U.S. Space Force

Observers have speculated the reusable spacecraft China launched in 2020 and again this month may be similar to the U.S. military’s X-37B spaceplane, which has flown on six missions since 2010. The U.S. military has acknowledged the existence of the X-37B program, and has released photos and specifications of the spacecraft.

But what the X-37B does in orbit has largely remained a secret. The military’s two unpiloted X-37B vehicles, built by Boeing and refurbished in a hangar at NASA’s Kennedy Space Center, host classified payloads and land on runways at the end of their missions. The program was developed by the U.S. Air Force, and the X-37B spacecraft are now operated by the U.S. Space Force.

Photos posted on Chinese social media this weekend appeared to show the payload fairing from the Long March 2F rocket that launched the Chinese reusable test spacecraft Aug. 4. The payload shroud is composed of two halves that jettison a few minutes after liftoff to reveal the spacecraft encapsulated inside.

The fairing on the Long March 2F rocket measures about 13.8 feet (4.2 meters) in diameter. Imagery of the fairing claimed to be from the Aug. 4 launch show extensions on each side the shroud that could have been added to accommodate the wings of a spaceplane similar to the X-37B. 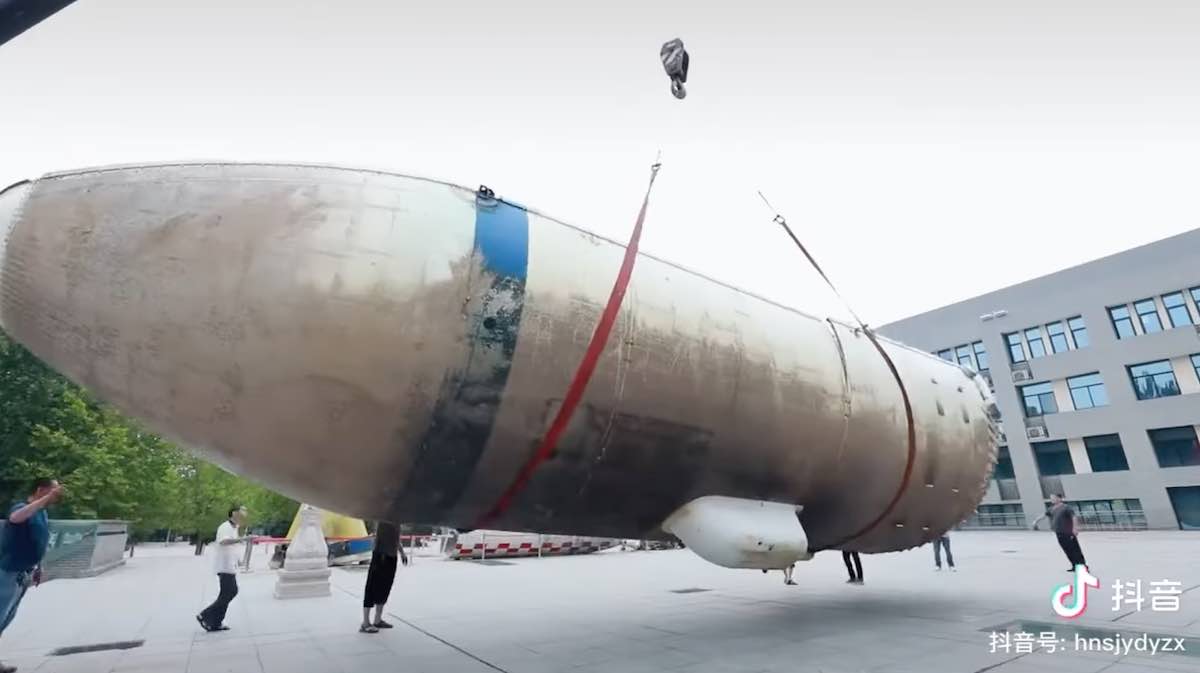 This still frame from a video shared on Chinese social media claims to show the recovered payload fairing from the Long March 2F rocket that launched China’s reusable experimental spacecraft on Aug. 4.

The launch of what is likely a Chinese military spaceplane Aug. 4 capped a busy week for China’s rockets.

A new solid-fueled launcher developed by the Chinese Academy of Sciences lifted off from Jiuquan on July 27 at 12:12 a.m. EDT (0412 GMT) and placed six small satellites into polar orbit. The rocket, named the Lijian 1, was successful on its first flight, becoming the largest solid-fueled satellite launcher in China.

Another launch at 11:08 p.m. EDT on Aug. 3 (0308 GMT on Aug. 4) used a Long March 4B rocket to launch a Chinese environmental satellite into polar orbit. The Terrestrial Ecosystem Carbon Inventory Satellite, also named Goumang, was accompanied on the mission by two smaller secondary payloads.