A Chinese Long March 5B rocket first stage made an uncontrolled, fiery reentry through Earth’s atmosphere over Southeast Asia today (Saturday), six days it launched a new science module to China’s Tiangong space station. While the eventual return of the booster was known, China made the decision to let it fall uncontrolled. They also did not share any tracking data, and the large size of the rocket stage drew concern about fragments possibly causing damage or casualties.

#USSPACECOM can confirm the People’s Republic of China (PRC) Long March 5B (CZ-5B) re-entered over the Indian Ocean at approx 10:45 am MDT on 7/30. We refer you to the #PRC for further details on the reentry’s technical aspects such as potential debris dispersal+ impact location. 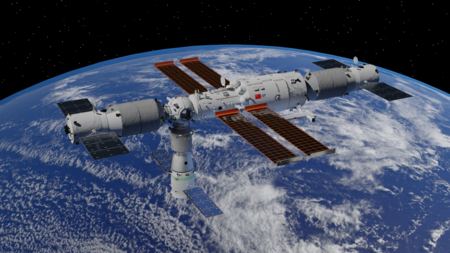 A rendering of the Chinese Tiangong space station. Credit: CMSA

“The People’s Republic of China (PRC) did not share specific trajectory information as their Long March 5B rocket fell back to Earth,” Nelson said. “All spacefaring nations should follow established best practices, and do their part to share this type of information in advance to allow reliable predictions of potential debris impact risk, especially for heavy-lift vehicles, like the Long March 5B, which carry a significant risk of loss of life and property. Doing so is critical to the responsible use of space and to ensure the safety of people here on Earth.”

Debris was likely observed from Kuching in Sarawak, Malaysia, and according to astronomer and orbital debris specialist Jonathan McDowell, debris would land downrange in northern Borneo, possibly Brunei.

Reentry looks to have been observed from Kuching in Sarawak, Malaysia. Debris would land downrange in northern Borneo, possbily Brunei. [corrected] https://t.co/sX6m1XMYoO

Experts say that while much of the empty rocket stage is expected to burn up on reentry, about 20 to 40 percent can survive, such as engine components designed to withstand high temperatures.

This is not the first time China has decided to let a booster fall back to Earth uncontrolled. They have done it at least twice previously, and after a similar event last year NASA said that China failed “to meet responsible standards regarding their space debris.”

China also did not share any information on why the booster would be falling back to Earth uncontrolled, but as NASA Associated Administrator for Science Thomas Zurbuchen said, something must have gone terribly wrong.

Whenever a heavy rocket plunges back to ?, uncontrolled, something terribly went wrong. Check out this list of such events by @planet4589 and draw your own conclusions. As a space community, without exceptions – we must do better! https://t.co/CaiE29dCzn https://t.co/4102egBrXm

With the uptick in rocket launches around the world, a recent study concluded there’s a 6-10% chance that someone will die from debris falling from space over the next ten years.

UT Q&A session about the return of space junk.