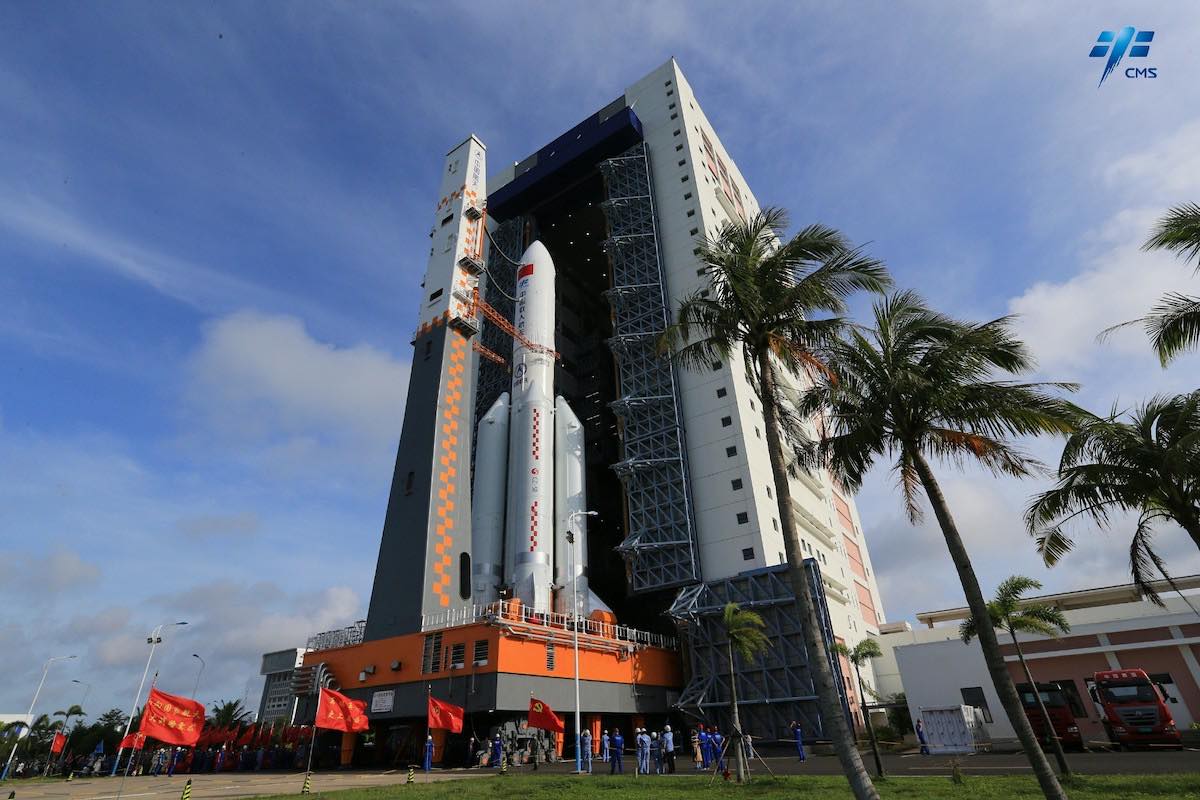 The Long March 5B rocket slated to launch the Wentian module to China’s space station emerges from its assembly building Monday at the Wenchang launch base on Hainan Island. Credit: CMSE

China moved a heavy-lift Long March 5B rocket to its launch pad Monday in preparation for liftoff this weekend with a 22-ton module for the country’s Tiangong space station, a mission that could end with another uncontrolled re-entry of the Long March 5B’s large core stage.

The powerful launcher rolled from its assembly building to the launch pad Monday at the Wenchang launch center on Hainan Island in southern China. The Wentian module for China’s space station is encapsulated inside the rocket’s payload fairing.

The Long March 5B rocket is set for launch around 2:20 a.m. EDT (0620 GMT) Sunday, July 24, according to airspace warning notices associated with the mission. That’s also the approximate time the Tiangong space station’s orbital plane passes over the Wenchang launch center.

The Wentian module, with a launch weight near 44,000 pounds (20 metric tons), will dock with the Tianhe core module on China’s Tiangong station in low Earth orbit. Chinese astronauts Chen Dong, Liu Yang, and Cai Xuzhe living on the Tiangong complex will monitor Wentian’s arrival, then become the first crew members to float into the station’s new module. 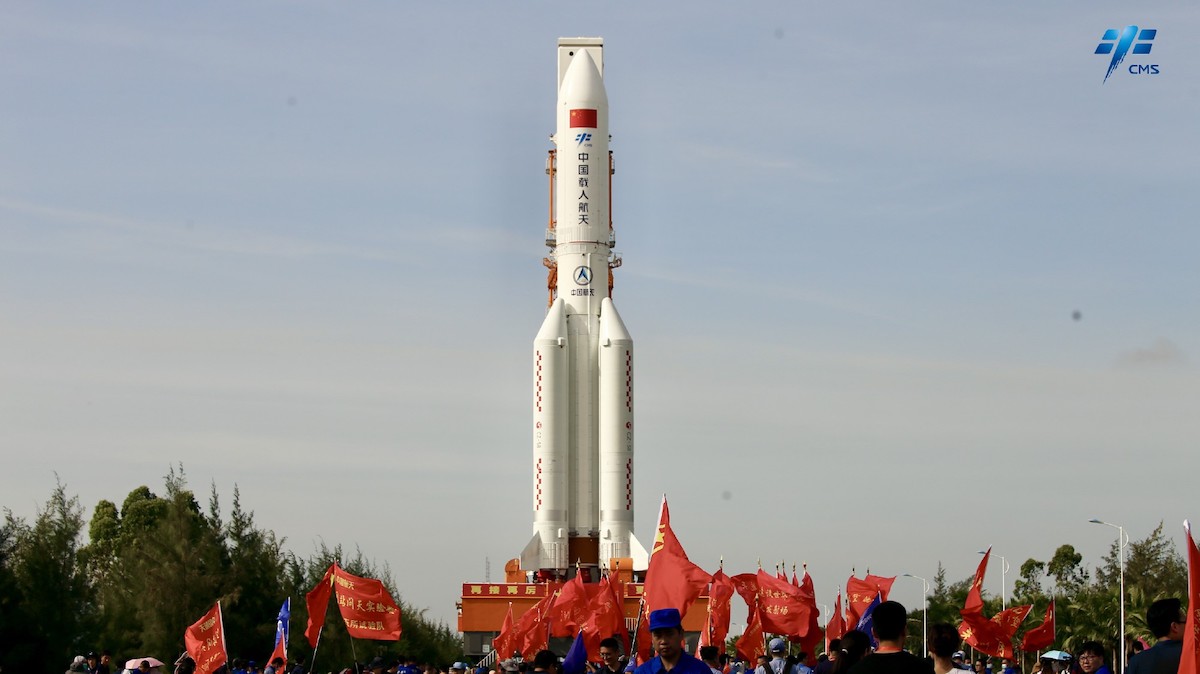 The Wentian module will initially dock with an axial port on the Tianhe module, a docking mechanism that was recently cleared by the departure of a no-longer-needed Tianzhou cargo ship. Tianhe’s mechanical arm will move the module to its final position on the side of the space station’s core section.

The Mengtian module scheduled for launch later this year will arrive at the Tiangong space station in a similar way. Once Wentian and Mengtian are in their final positions, the Chinese station will have a distinctive “T” shape with its three main pressurized elements.

With the Long March 5B on the launch pad to send the Wentian module into orbit, Chinese teams at Wenchang will complete final pre-flight checkouts and testing before loading kerosene, liquid hydrogen, and liquid oxygen propellants into the rocket in the final hours before launch Sunday.

Ten engines will ignite to push the 176-foot-tall (53.7-meter) Long March 5B rocket into the sky with 2.4 million pounds of thrust.

That means the Long March 5B rocket can reach a low-altitude orbit using four kerosene-fueled strap-on boosters and a hydrogen-fed core stage. On the two previous Long March 5B flights, including the Tianhe core module launch last year, the core stage remained in a low orbit after deploying its payloads. 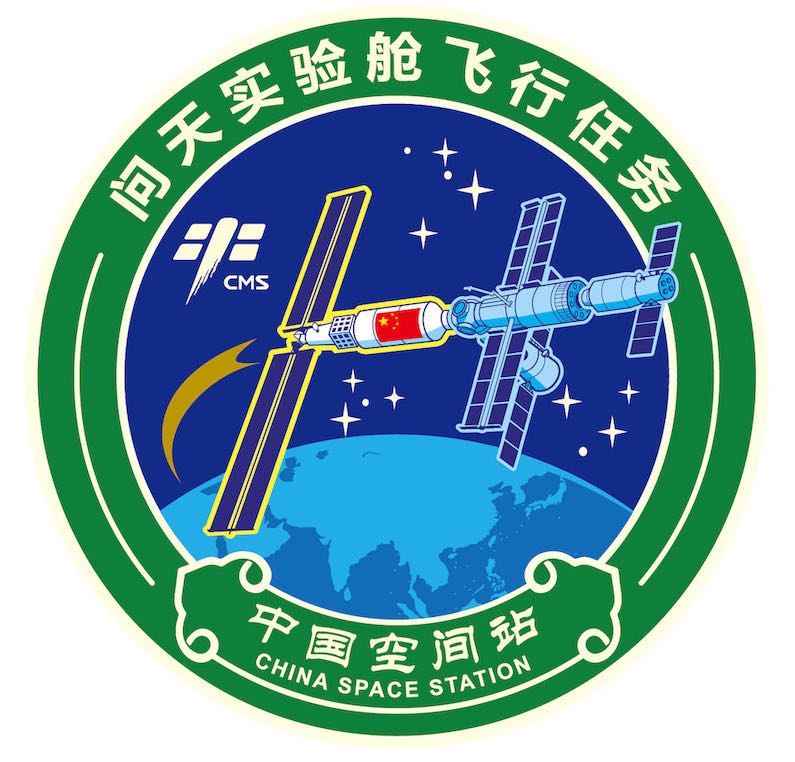 The mission patch for the launch of the Wentian module shows the lab element docked with an axial port of the Tianhe core module, before it its repositioned to a side-facing port with the robot arm. Credit: CMSE

The core stages on the previous Long March 5B missions re-entered the atmosphere about one-to-two weeks after launch. The Long March 5B’s core stage measures about 100 feet (30 meters) long and has an empty mass of about 23.8 tons (21.6 metric tons), making it one of the largest and most massive human-made objects to ever re-enter the atmosphere in an uncontrolled manner.

After the most recent Long March 5B launch and re-entry last year, NASA Administrator Bill Nelson said China was “failing to meet responsible standards regarding their space debris.”

“Spacefaring nations must minimize the risks to people and property on Earth of re-entries of space objects and maximize transparency regarding those operations,” Nelson said in a statement last year.

Wang Wenbin, a spokesperson for the Chinese Foreign Ministry, said in a press conference last year that it is “common practice” for upper stages of rockets to burn up while re-entering the atmosphere. He incorrectly referred to the Long March 5B rocket body as an upper stage, and said that “most of its parts will burn up upon re-entry, making the likelihood of damage to aviation or ground facilities and activities extremely low.”

But no other launcher in the world leaves such a massive component in orbit to fall back to Earth. Dead satellites and old rocket stages regularly re-enter the atmosphere, but re-entering objects with masses of more than a few tons are rare. 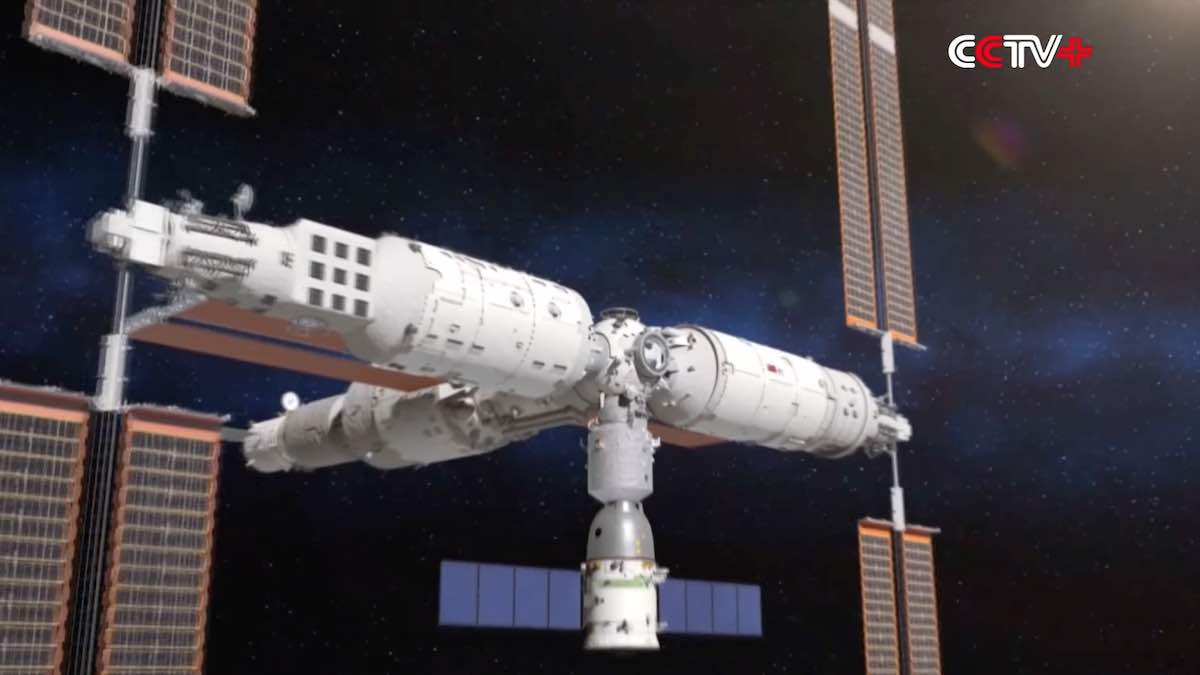 Artist’s illustration of China’s Tiangong space station as it will appear after construction is completed. Credit: CCTV

Larger booster and core stages used on other rockets typically fall back to Earth without reaching orbit, usually in areas downrange from the launch site that are clear of people.

Like most space junk that comes back into the atmosphere, much of the Long March 5B rocket burns up as temperatures reach thousands of degrees during re-entry. But some debris could reach Earth’s surface intact.

The risk of any of the rocket debris harming someone or damaging property is low, with objects most likely to fall into the ocean or in unpopulated areas. But the uncontrolled re-entry of the first Long March 5B core stage in 2020 spread debris over the Ivory Coast. The Long March 5B re-entry last year occurred over the Indian Ocean.

Without any design changes, the Long March 5B rockets used for launches of the Wentian module Sunday and the Mengtian module in October will meet a similar fate with an unguided re-entry. Airspace warning messages released to pilots for the Wentian launch this weekend do not show any re-entry zone for the core stage, suggesting it will remain in orbit for an uncontrolled descent in the days or weeks after launch.

The Chinese space station orbits about 236 miles (380 kilometers) above Earth, at an inclination of 41.5 degrees to the equator. The orbit means the spent Long March 5B core stage could come down anywhere between 41.5 degrees north and south latitude.