One look at the Planetary Decadal Survey for 2023 – 2032, and you will see some bold and cutting-edge mission proposals for the coming decade. Examples include a Uranus Orbiter and Probe (UOP) that would study Uranus’ interior, atmosphere, magnetosphere, satellites, and rings; and an Enceladus orbiter and surface lander to study the active plumes emanating from Enceladus’ southern polar region. Not to be outdone, China is also considering a nuclear-powered Neptune Explorer to explore the ice giant, its largest moon (Triton), and its other satellites and rings.

The mission was the subject of a study conducted by researchers from the China National Space Agency (CNSA), the Chinese Academy of Sciences (CAS), the China Atomic Energy Authority, the China Academy of Space Technology, and multiple universities and institutes. The paper that describes their findings (published in the journal Scientia Sinica Technologica) was led by Guobin Yu, a researcher with the School of Astronautics at Beihang University and the Department of Science and Technology and Quality at the CNSA.

As they indicate in their paper, ice giants like Neptune are a potential treasure trove of scientific discoveries. In addition to its fascinating interior structure (which includes diamond rain!), Neptune is believed to have played an important role in the formation of the Solar System. In short, its composition includes large amounts of gas that were part of the protostellar nebula from which our system formed. At the same time, its position indicates where the planets formed (and since migrated to their current orbits).

There are also the enduring mysteries of Neptune’s largest moon Triton, which astronomers suspect is a planetoid flung from the outer Solar System and captured by Neptune’s gravity. The arrival of this planetoid is also thought to have caused a shakeup with Neptune’s natural satellites, causing them to break up and coalesce to form new moons. It’s also theorized that Triton will eventually break up and form a halo around Neptune or collide with it. Basically, the study of Neptune, its satellites, and its orbital dynamics could provide answers to how the Solar System formed, evolved, and how life began.

Unfortunately, due to the difficulties of sending missions to deep space (which includes launch windows, power supply, and communications), only one mission has visited Neptune. This was the Voyager 2 probe, which flew past the system in 1989 and obtained most of what we now know about this ice giant and its system. What’s more, the nature of Voyager 2‘s scientific instruments imposed certain limitations on the amount of data it could acquire. In recent years, NASA has proposed sending a mission to explore Neptune and Triton (the Trident spacecraft).

However, this mission was not assigned priority by the Planetary Science and Astrobiology Decadal Survey 2023-2032 and was passed over for a Uranus Orbiter and Probe (UOP). But given the potential and immense improvements that have been made in spacecraft instruments since Neptune was visited last, Yu and his colleagues recommend it’s time for another mission to Neptune. (Note: all information and quotations translated from the original paper, written in Mandarin).

Of course, the challenges mentioned above remain, which were used to inform the design of the spacecraft and its mission architecture. Looking at the power supply issue, Yu and his colleagues needed a source that could safely and reliably provide electricity for no less than fifteen years. They determined that a Radioisotope Thermoelectric Generator (RTG) with a 10-kilowatt energy (kWe) capacity would suffice. This nuclear battery, similar to what the Curiosity and Perseverance rovers use, converts heat energy from the decay of radioactive material into electricity. As they state in their paper: 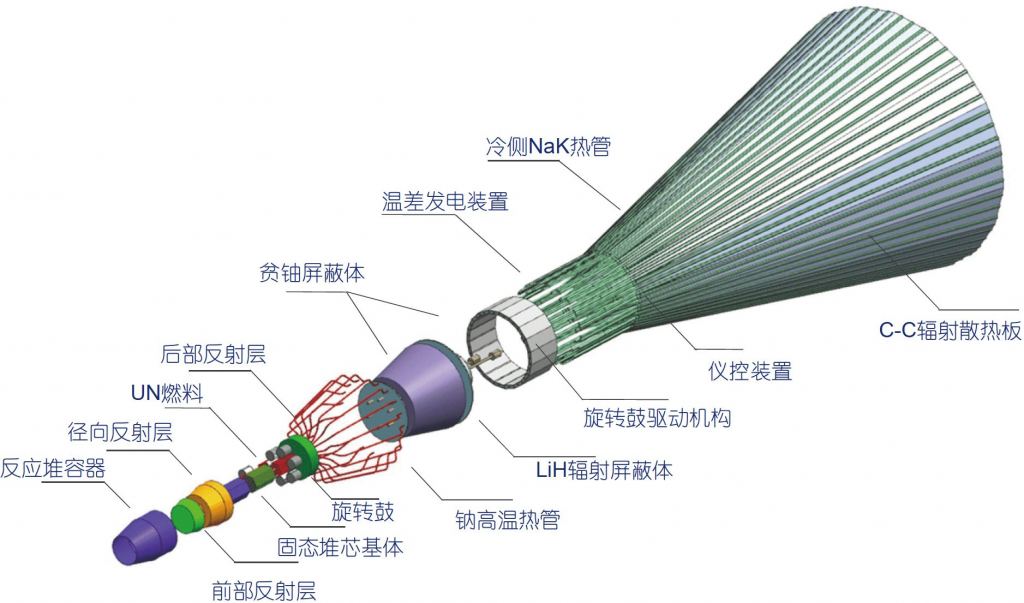 They further recommend that the power supply system be based on a scheme of using one heat pipe, one set of thermoelectric conversion units, and one set of heat sinks as a single power generation unit. Multiple power generation units, where the heat energy is converted into electrical energy, can then be connected in parallel to supply power to the spacecraft. This system, they write, will be able to supply the mission with “8 years of 10 kWe full power operation and 7 years of 2 kWe low power operation, which can effectively ensure the reliability and safety of the system during the entire mission.”

The team also identified several key processes essential for this system’s safe and reliable operation. Among them, the generator must ensure continuous and controllable heat generation from nuclear fission, reliable heat transfer in the reactor, efficient thermoelectric conversion, and waste heat removal. To achieve this, the design for their reactor calls for Uranium-235 rods, monolithic uranium-molybdenum alloys, and rod-shaped ceramic elements that allow for efficient high transfer with a lightweight, compact core.

The spacecraft would also carry several instruments to study the planet, its system, and objects along the way. This includes a Neptune Atmospheric Probe (NAP) for studying the planet’s interior and a Triton Penetration Probe (TPP) that would examine the moon’s crust. A complement of smaller satellites (CubeSats or nanosatellites) would also be deployed along the way to explore a Main Belt asteroid and a Centaur asteroid.

To start, the team explored several possible methods for exploring Neptune (remote sensing, flybys, orbital observation, soft landing, etc.). Remote sensing and flybys were ruled out immediately because these would not allow the mission to effectively measure Neptune’s deep composition and internal structure. “The requirements are high, and the task scale, technical difficulty, and funding requirements are extremely large,” they state. “Based on the scientific objectives, technical level, and funding scale, the detection method is determined to be polar orbiting detection.”

Another consideration was that given the distances involved (an average of 30 AUs from the Sun) and the carrying capacity of a mission to deep space, the probe’s flight speed should be increased as much as possible during the early stage. They further concluded that the best way to do this (and decelerate to achieve an orbit around Neptune) was to conduct a launch around 2030, which would allow for a gravity assist with Jupiter and an arrival date of 2036. Other launch opportunities include 2028, 2031, and 2034, but any flights would need to arrive at Neptune before 2040.

After completing a few orbits, the spacecraft would release a series of small satellites and two probes to explore Neptune’s atmosphere and Triton’s surface (respectively). 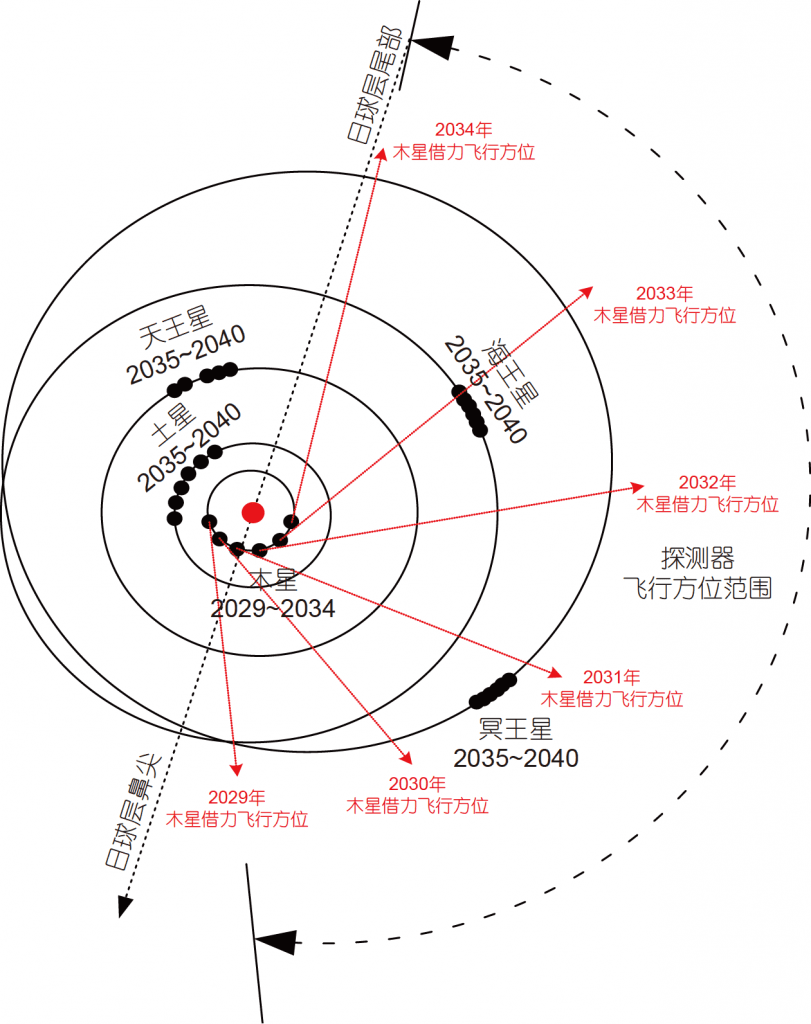 The flight path for a possible Neptune Explorer, based on the locations of the planets before 2040. Credit: SciEngine/Yu, Guobin et al. (2022)

According to Yu and his colleagues, there are four major scientific objectives that a Neptune Explorer should investigate. These include Neptune’s internal structure and composition, its magnetosphere and ionosphere, its moons and rings, and its populations of Trojans and Centaurs (small asteroid families that share its orbit). In terms of its structure/composition, astronomers hope to shed light on Neptune’s strange thermal properties, which are believed to be the result of its “weather patterns.” As they write:

“The internal heat sources of Neptune (gravity collapse, tidal force, isotope decay heat, etc.) are considered to be one of the important sources to maintain the surface temperature of Neptune. There is a deviation between the calculated infrared detection result 57?K and the actual result 47?K, so the infrared radiation measurement in a wider frequency band is helpful to understand the operation mechanism of the heat release rate inside Neptune.”

Examining Neptune’s interior would also explain why the planet is much smaller than Saturn but has more than twice the average mass density. Knowing more about Neptune’s atmospheric composition will also reveal how it differs from Uranus’s atmosphere (similarly blue but lighter). This research will also reveal new information on the composition of the protostellar clouds from which the ice giant formed and the formation of the Solar System by extension.

As for Neptune’s moons and rings, the potential for scientific discoveries includes the retrograde orbit, revolution, and dynamic migration of Triton (Neptune’s largest moon). The fact that Triton orbits in the opposite direction of Neptune’s rotation is one of the main arguments for how Triton could be a dwarf planet that formed in the Kuiper Belt – the other being its composition, which is similar to that of Pluto. Per this theory, Triton was ejected from the Kuiper Belt and captured by Neptune’s gravity, which caused the breakup of Neptune’s existing satellites and the formation of new, smaller ones.

In essence, studying Triton’s orbital dynamics could shed light on the early solar system’s history, where ejected objects and planetoids were still settling into their current orbits. This could be supplemented by a comparative analysis of 2014 MU69 (aka. Arrakoth), the KBO that the New Horizons probe studied during its close flyby in July 2015, and other KBOs to learn more about the origin of Triton.

There’s also Triton’s cryovolcanic activity, resulting from tidal flexing in its interior caused by Neptune’s gravitational pull. However, this activity increases when Triton is closest to the Sun (perihelion), resulting in greater eruptions from the interior. This will leave higher concentrations of nitrogen and other gases in the moon’s tenuous atmosphere, which could be studied to learn more about its interior composition and structure. As for the rings, the team noted several objectives there:

“Establish a complete list of planetary rings and their inner Shepherd satellites, study the characteristics, formation mechanism, material exchange, and gas transport of planetary rings of different orbital types, analyze the origin of different celestial bodies, and detect possible organic matter… The multiple planetary rings of Neptune are not uniformly distributed in longitude. Instead, it presents an arc-block-like discrete structure. Why these arc-block structures can exist, and whether they exist stably without spreading out, are all interesting dynamical problems.” 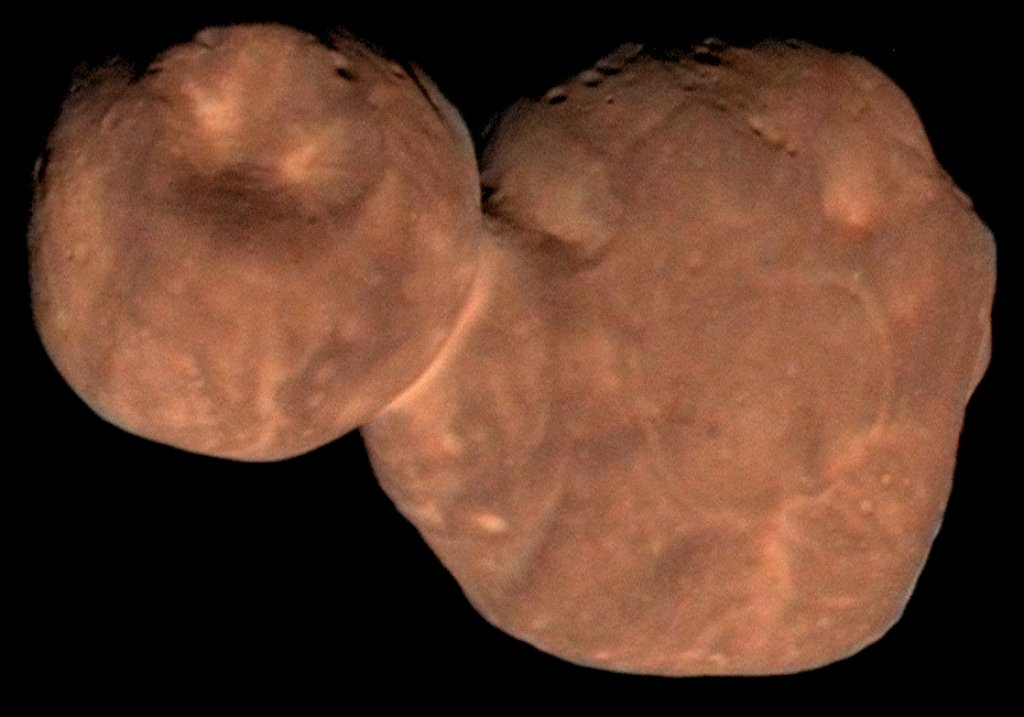 This composite image of the KBO 2014 MU69 (aka. Arrokoth) compiled from data obtained by NASA’s New Horizons spacecraft during its flyby. Credits: NASA/JHUAPL/SwRI/Roman Tkachenko

China’s space agency has made some rather impressive moves in recent years that illustrate how the nation has become a major power in space. These include the development of heavy launch rockets like the Long March 9, the deployment of space stations (the Tiangong program), and their success with the Chang’e and Tianwen programs that have sent robotic explorers to the Moon and Mars. A mission like this, which would fly to the outer Solar System and one of the least-studied bodies, indicates how China hopes to expand its space program in the coming years.

It would also complement NASA’s plan to send a robotic probe to Uranus, another of the Solar System’s least-studied bodies. Like the proposed Neptune Explorer, this mission would study Uranus’ atmosphere, interior structure, and moons and rings using an orbiting spacecraft and a deployable probe. The resulting data would keep astronomers and planetary scientists busy for decades and could reveal some truly groundbreaking things about the outer Solar System – not the least of which would be its history and how this allowed for the emergence of life here on Earth.

The post China is Considering a Nuclear-Powered Mission to Neptune appeared first on newsastronomy.com.