News Astronomy > News > Charon’s Red Cap at its North Pole? We Might Have an Answer

Pluto’s largest moon, Charon, started off as a beautiful, smooth red grape until someone came along, mostly peeled it, tried to smoosh it, then just gave up and walked away, leaving the poor moon to look like the absolute travesty that it is. Okay, so maybe that’s not exactly what happened, but Charon just looks like a mess and scientists want to know why. Never mind its smooshed equator, but what’s the deal with its red cap? Where did it come from and why is it red?

In two recent studies published in Science Advances and Geophysical Research Letters, Southwest Research Institute (SwRI) scientists combined data from NASA’s New Horizons mission with novel laboratory experiments and exospheric modeling to reveal the likely composition of the red cap on Pluto’s moon Charon and how it may have formed. This first-ever description of Charon’s dynamic methane atmosphere using new experimental data provides a fascinating glimpse into the origins of this moon’s red spot as described in the two recent papers. 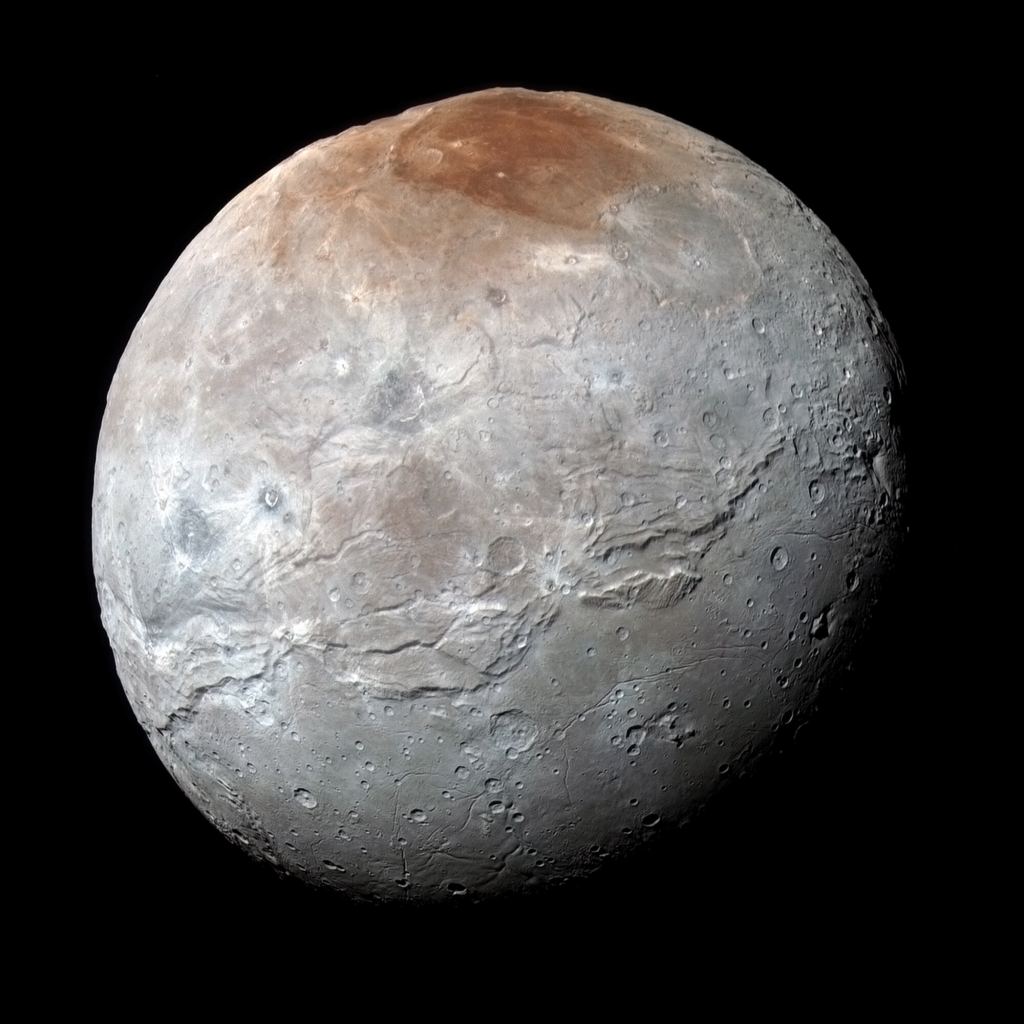 Southwest Research Institute scientists combined data from NASA’s New Horizons mission with novel laboratory experiments and exospheric modeling to reveal the likely composition of the red cap on Pluto’s moon Charon and how it may have formed. New findings suggest drastic seasonal surges in Charon’s thin atmosphere combined with light breaking down the condensing methane frost may be key to understanding the origins of Charon’s red polar zones. (Credit: NASA/Johns Hopkins APL/SwRI)

“Prior to New Horizons, the best Hubble images of Pluto revealed only a fuzzy blob of reflected light,” said SwRI’s Randy Gladstone, a member of the New Horizons science team. “In addition to all the fascinating features discovered on Pluto’s surface, the flyby revealed an unusual feature on Charon, a surprising red cap centered on its north pole.”

Soon after the 2015 encounter, New Horizons scientists proposed that a reddish “tholin-like” material at Charon’s pole could be synthesized by ultraviolet light breaking down methane molecules. These are captured after escaping from Pluto and then frozen onto the moon’s polar regions during their long winter nights. Tholins are sticky organic residues formed by chemical reactions powered by light, in this case the Lyman-alpha ultraviolet glow scattered by interplanetary hydrogen molecules.

“Our findings indicate that drastic seasonal surges in Charon’s thin atmosphere as well as light breaking down the condensing methane frost are key to understanding the origins of Charon’s red polar zone,” said SwRI’s Dr. Ujjwal Raut, lead author of the Science Advances paper. “This is one of the most illustrative and stark examples of surface-atmospheric interactions so far observed at a planetary body.”

The team realistically replicated Charon surface conditions at SwRI’s new Center for Laboratory Astrophysics and Space Science Experiments (CLASSE) to measure the composition and color of hydrocarbons produced on Charon’s winter hemisphere as methane freezes beneath the Lyman-alpha glow. The team fed the measurements into a new atmospheric model of Charon to show methane breaking down into residue on Charon’s north polar spot.

“Our team’s novel ‘dynamic photolysis’ experiments provided new limits on the contribution of interplanetary Lyman-alpha to the synthesis of Charon’s red material,” Raut said. “Our experiment condensed methane in an ultra-high vacuum chamber under exposure to Lyman-alpha photons to replicate with high fidelity the conditions at Charon’s poles.”

“The model points to ‘explosive’ seasonal pulsations in Charon’s atmosphere due to extreme shifts in conditions over Pluto’s long journey around the Sun,” said Dr. Ben Teolis, lead author of the Geophysical Research Letters paper.

The team input the results from SwRI’s ultra-realistic experiments into the atmospheric model to estimate the distribution of complex hydrocarbons emerging from methane decomposition under the influence of ultraviolet light. The model has polar zones primarily generating ethane, a colorless material that does not contribute to a reddish color.

“The team is set to investigate the role of solar wind in the formation of the red pole,” said SwRI’s Dr. Josh Kammer, who secured continued support from NASA’s New Frontier Data Analysis Program.

As stated, Charon is the largest of Pluto’s five moons and the largest known satellite relative to its parent body. It was discovered in June 1978 by James Christy and Robert Harrington at the US Naval Observatory in Flagstaff, Arizona. Charon’s surface is frigid and covered with methane and nitrogen ice, and possibly water ice, as well. Ground-based observations from the Gemini Observatory in Hawaii have hypothesized that Charon might even exhibit cryovolcanism in the form of ice-particle geysers. While the Hubble Space Telescope photographed both Pluto and Charon in 1994, it wasn’t until the New Horizons spacecraft flew through the Pluto systemin 2015 that Charon got its first (and only) closeup study. The pioneering spacecraft revealed a world with a geologically chaotic history, with the great canyon system along the moon’s equator possibly indicating a titanic geologic upheaval sometime in Charon’s past. 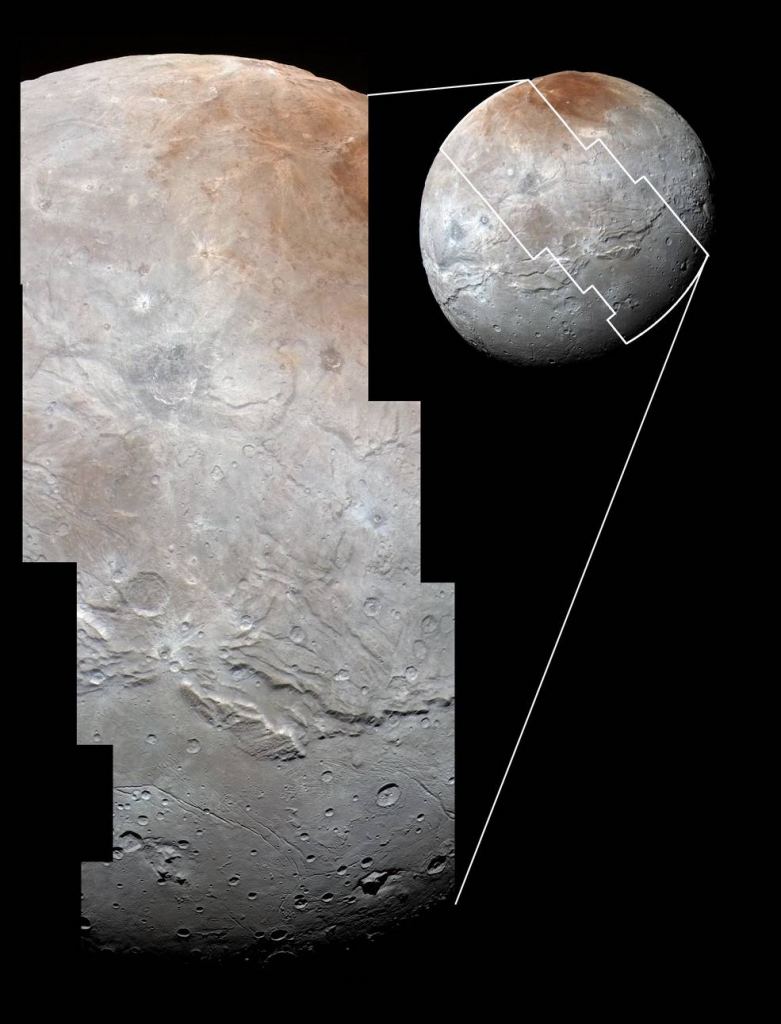 High-resolution images of Charon were taken by the Long Range Reconnaissance Imager on NASA’s New Horizons spacecraft, shortly before closest approach on July 14, 2015, and overlaid with enhanced color from the Ralph/Multispectral Visual Imaging Camera (MVIC). Charon’s cratered uplands at the top are broken by series of canyons, and replaced on the bottom by the rolling plains of the informally named Vulcan Planum. The scene covers Charon’s width of 1,214 kilometers (754 miles) and resolves details as small as 0.8 kilometers (0.5 miles). (Credit: NASA/JHUAPL/SwRI)

When will we go back to the Pluto system and what further secrets will we unlock about Pluto’s largest satellite? Only time will tell, and this is why we science!

The post Charon’s Red Cap at its North Pole? We Might Have an Answer appeared first on newsastronomy.com.