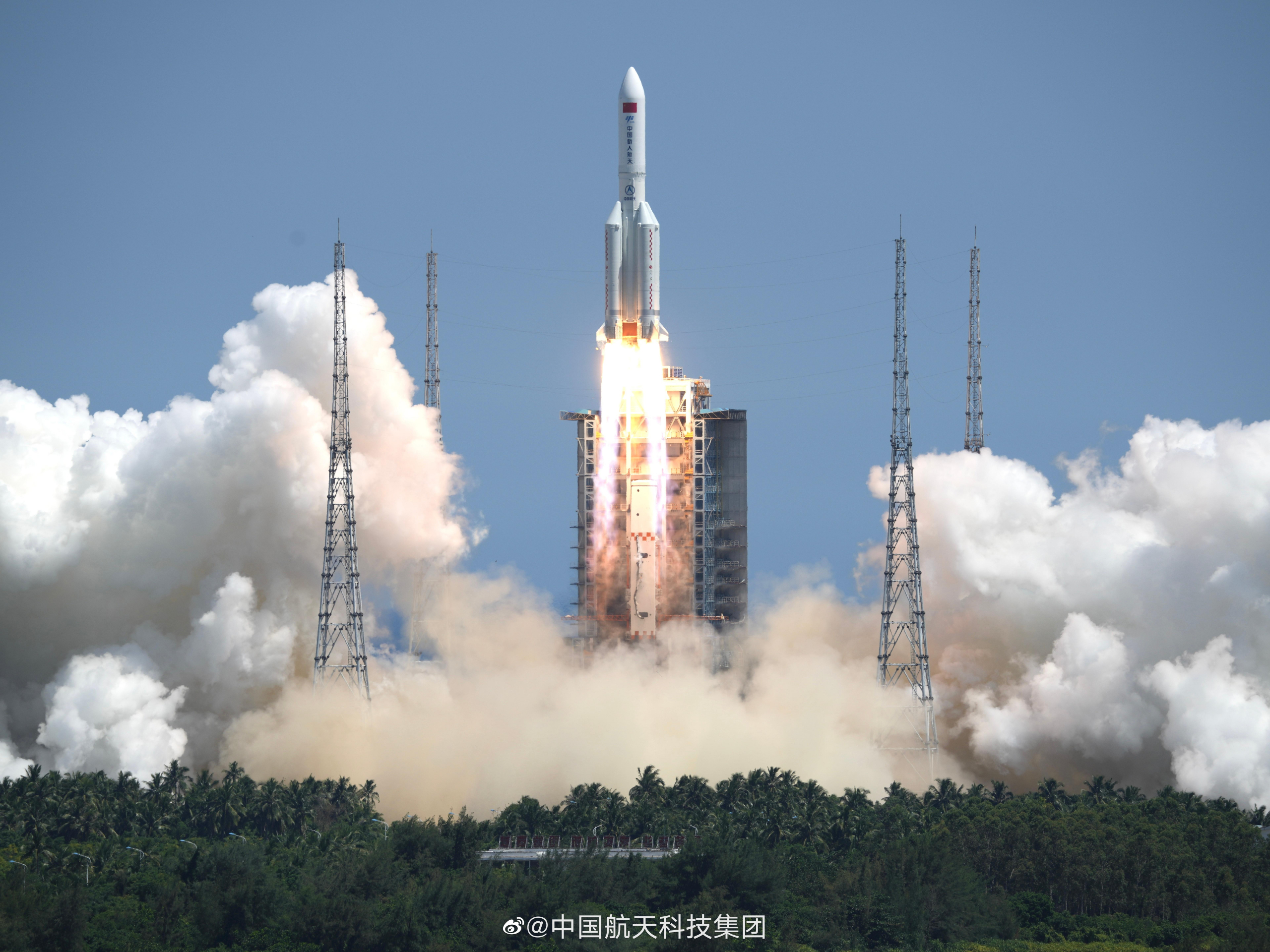 China has launched the Wentian Laboratory Cabin Module on Sunday, July 24 at 06:22 UTC out of the Wenchang Space Launch Site in China. The module is one of two planned for launch this year to China’s Tiangong space station, with the second being the Mengtian module which is slated to launch in October.

Both modules will launch on China’s most powerful rocket currently available, the Chang Zheng 5B (CZ-5B), and will target the low Earth orbit (LEO) of the Tiangong space station, which is in a 390 km altitude, 41.58° inclination orbit. Both will dock to the Tianhe core module of the station, which was launched in April 2021.

Wentian (“Quest for the Heavens”) is a laboratory cabin module (LCM), and one of the three major modules of the Chinese Space Station. It will not only provide science space for the station, but also additional navigation capabilities, avionics, propulsion, and orientation control.

The module is 17.9 meters long with a diameter of 4.2 meters. It is about 22 tons in mass and contains pressurized space.

It will host multiple scientific research facilities including a Life and Ecology Rack, a Biotechnology Rack, an Advanced Aerospace Technology Rack, a Cryogenic Storage Rack, and a facility to study varying gravity. It also includes more payload racks for future, planned science instruments.

Wentian also has the capability to host science experiments outside of the module to study different influences on different kinds of probes, including cosmic ray, space environment, and solar wind research.

This is what we hoped to know, but CMSA hid it for years. A video introduction of Wentian Lab Module with rich details. https://t.co/COuFPYz70L pic.twitter.com/fqPN97UbSE

On the side of the module, two 30-meter-long solar arrays will be used to power the station and module. The exact capabilities of the two solar panels are unknown, as are details of the Wentian module.

What is known is that the module will have an airlock system, which will aid the station for future spacewalks. It also includes a second mechanical arm and additional crew cabins to support more people living on the station.

The module will initially dock with the axial port of the Tianhe core module of the station. After that, the station’s robotic arm will move the module to the desired radial port.

This is necessary as China opted to simplify some of the Tianhe module’s docking posts. This resulted in the ports for Wentian and Mengtian not having any active docking systems. This type of process was used previously with Russia’s MIR space station.

The Tiangong space station started in April 2021 with the launch of the Tianhe core module (“Harmony of the Heavens”). After final assembly, the station is planned to have a mass of 100 tons, which equals about 20% of the International Space Station with its mass of roughly 440 tons.

Tiangong has a planned lifetime of at least 10 years, with possible extensions after that. It will be companied by the Chinese Survey Space Telescope (CSST) which is planned to launch in 2023. This telescope will operate in proximity to the Tiangong station and periodically dock to it for inspection and maintenance.

The telescope will be equipped with a 2-meter diameter primary mirror and is planned to be able to see 40 percent of the sky with its 2.5 gigapixel camera.

The 15.5-ton heavy telescope is currently planned to launch on the same type of rocket as all three modules of the station, the CZ-5B.

The Shenzhou 14 mission, which docked to the space station in June 2022, will be the crew that is supporting the installation of both science modules for the station.

Commander Chen Dong, Operator Liu Yang, and System Operator Cai Xuzhe will install both modules before they will be replaced by the Shenzhou 15 mission later this year.

This mission marks the beginning of a constant presence of Chinese people on the Chinese Space Station, with the first official crew handover planned for later this year.

The module arrived at the launch site earlier this year in preparation for integration, fueling, and final checks.

Before the launch, operators rolled out the rocket earlier this week with the fully encapsulated Wentian on top.

On July 22, a dress rehearsal was conducted by the Beijing Aerospace Flight Control Center before clearing the module for launch.

The Chang Zheng 5B, which was used for this flight, is China’s biggest rocket to date.

It is used for high energy and high mass payloads, such as the modules for the Chinese space stations and planned missions to the Moon and Jupiter. 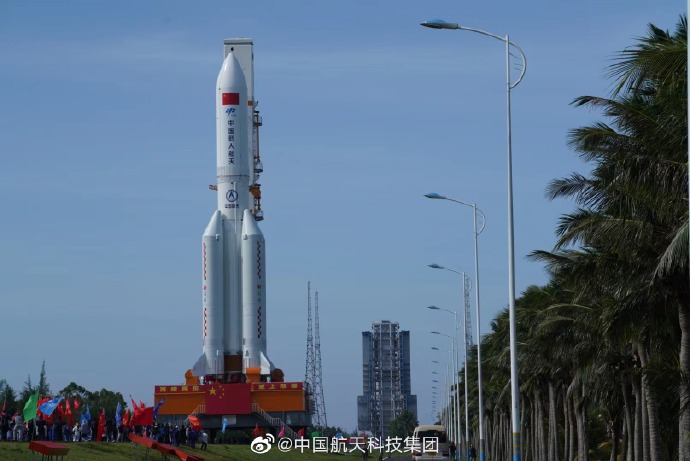 The program to develop CZ-5 was initiated in 2007 to meet the increasing demand for high mass payloads in China. This led to a first flight in November 2016 with the Shijian 17 payload.

The upgraded CZ-5B launched for the first time in May 2020 and is optimized for high mass, low orbit payloads. It lacks the optional second stage that the CZ-5 has for high-energy orbits.

The mass at liftoff for the stage is 186,900 kg and the engines operate at a specific impulse of 316.7 seconds at sea level and 428 seconds in a vacuum.

Mounted to the site core stage are the four 3.35 diameter booster cores, which are powered by two YF-100 engines each. In contrast to the core stage, these boosters use RP-1 and liquid oxygen as a propellant mix. The CZ-5-300 boosters produce 2,400 kN of thrust each, bringing the total thrust of the four boosters to 9,600 kN. The engines operate at a specific impulse of 300 seconds at sea level. 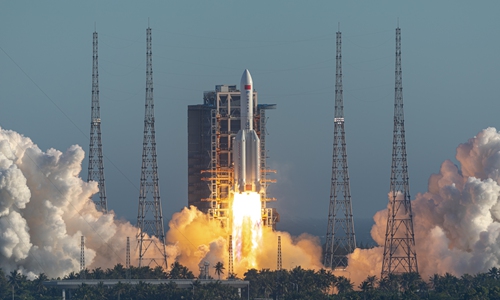 At T+174 seconds, the four liquid side boosters burn out and decouple from the core stage to save weight in the later stages of the flight.

At T+224 seconds, the payload fairing that protected the module during the atmospheric flight of the mission was released to further save mass.

After this, the Wentian module was exposed to the vacuum of space as it no longer needed protection against atmospheric drag. 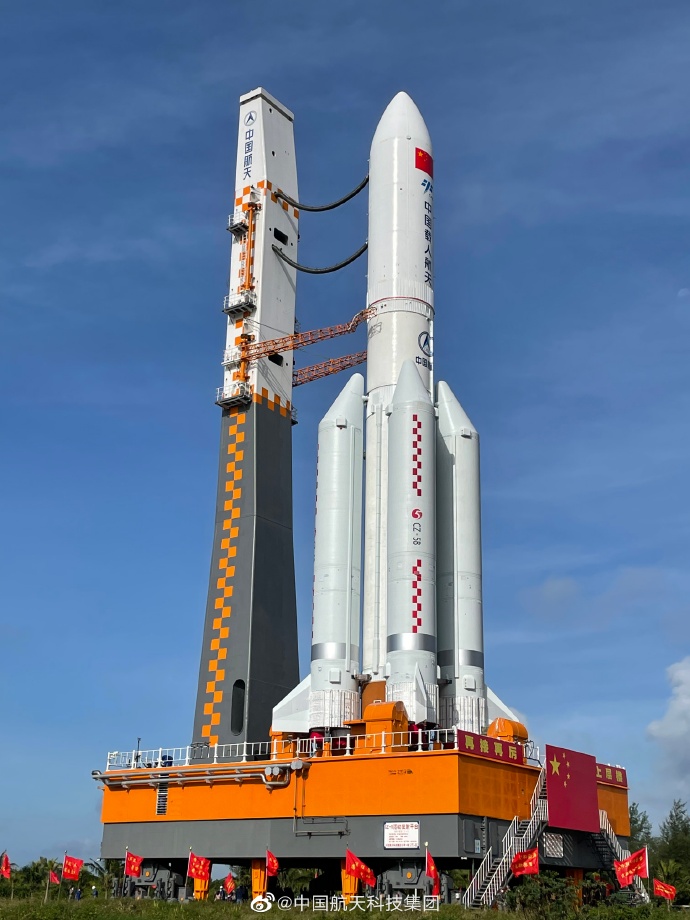 After T+492 seconds, the hydrogen core stage burned out and completed its job, bringing the Wentian science module into its desired trajectory to the Tiangong space station.

After this, the module will free-fly the rest of its path to the station and use its onboard propellant and propulsion to maneuver itself to the desired position before docking.

In the past, the Chang Zheng 5B core stage has been uncontrolled after reaching its desired orbit. The previous two CZ-5B flights had the massive core stage reenter Earth’s atmosphere without any indication or control over the final drop zone.

Chinese officials rebutted, saying this kind of behavior was common practice for rocket stages in the west; however, the size of the stage makes it more likely that parts of it make it through reentry and reach the lower parts of the atmosphere before splashing down — something that is not common in the west where large stages are usually left on safe suborbital trajectories to prevent uncertainty as to their reentry point.

No additional information was provided on if the rocket was modified for this launch or if such an uncontrolled occurrence is likely again.

The Wenchang Space Launch Site is in the Hainan Province, China. It is the newest spaceport constructed in China and currently has two launch complexes. One is for the CZ-5 and the other for smaller rockets such as CZ-7 and CZ-8.

One of the reasons Wenchang was chosen is for its location near the ocean, which means launches do not endanger citizens like the other in-land launch sites in China sometimes do.

This is the first flight of Chang Zheng 5B in 2022 and the 3rd flight overall. In total, this is the 25th launch out of China in 2022, being second behind the United States with over 46 launches from American rocket companies so far this year.

(Lead photo: Chang Zheng 5B lifts off with Wentian.)