News Astronomy > News > Catch superb Saturn at its best in 2022 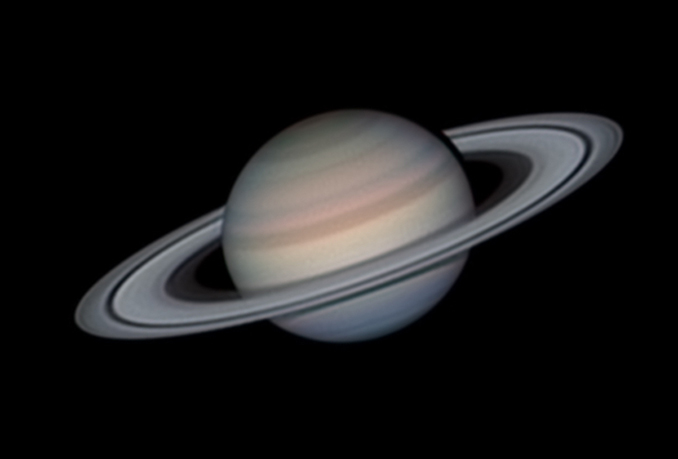 The Solar System’s most picturesque planet comes to opposition at 17h UT on 14 August (14/15, night of Sunday into Monday morning), when it lies at the vast distance of 1,324 million kilometres (8.856 astronomical units). It can be observed among the stars of the southern constellation of Capricornus for most of the night; when you watch its steady glow, consider that its reflected light from the Sun, travelling at an unimaginably fast 299,792 kilometres per second, has taken around 67 minutes to wing its way across interplanetary space to hit your eyeballs!

Saturn’s opposition is eagerly awaited as it’s one of the observing highlights of the year. In fact, Saturn is well placed throughout the remainder of August and into September and October, so if you’re clouded out on Sunday night don’t worry as there’s ample other observing nights to come.

Saturn is the planet that every casual stargazer or budding amateur astronomer wants to see through a telescope. Even a seasoned, seen-it-all sage never tires of grabbing a look at the most beautiful planet in the Solar System. It only takes one look at Saturn’s majestic system of rings through a telescope and you’re hooked. Nobody ever forgets the first time they see Saturn sail serenely into the field of view. 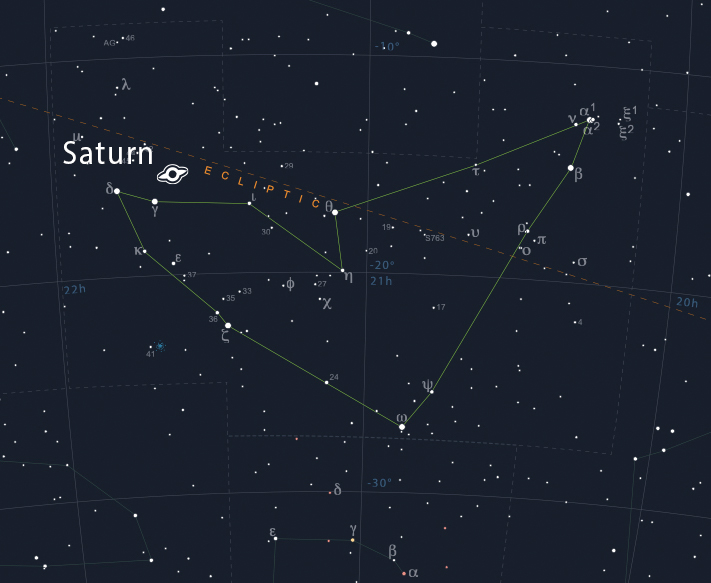 Saturn comes to opposition on 14 August, when it can be found among the stars of Capricornus. AN graphics by Greg Smye-Rumsby.

A small telescope in the 80–90mm (~three-inch) class operating at 50x is all you’ll need to see Saturn’s two main rings, Rings A and B, as separate structures, to show the flatness (oblateness) of Saturn’s globe (it’s the most oblate or squat planet in the Solar System, more so than Jupiter) and to follow Titan, Saturn’s giant moon, orbiting its parent.

Presently, Saturn is tracking retrograde (east to west) among the stars of eastern Capricornus (see the finder chart). From the UK the constellation of Capricornus is rather a roof-top scrapper from towns and cities, so seek out an observing site with a southern horizon free from major obstructions. Shining at magnitude +0.3 and with a noticeable yellowish tint, Saturn will be an obvious sight when it culminates between about 1am to 1.30am BST. With a declination of 15 degrees south, its location so far south of the celestial equator is far from ideal for observers at mid-northern latitudes, which includes the UK.

From London, Saturn peaks at an altitude of 23 degrees as it crosses the southern meridian (culminates). In Scotland, Saturn achieves an elevation of between 18 to 19 degrees. Ideally, you’ll want to catch Saturn while its within an hour either side of culmination to benefit from better seeing opportunities. At least we can say Saturn is heading northwards, albeit slowly, from its Northern Hemisphere nadir at the oppositions in 2017, 2018 and 2019, when it lounged in Ophiuchus and Sagittarius.

Observing any astronomical body at an altitude of less than about 30 degrees increases the chance of enduring destructive seeing conditions. The closer to the horizon your chosen object lies, the more atmosphere or air you are looking through and the more your view deteriorates and the brightness of the object decreases. To give yourself the best chance of securing some decent views, an atmospheric dispersion filter is a very handy accessory to employ, as it will correct for atmospheric chromatic dispersion, which causes distracting red and blue fringing at Saturn’s limbs, as Earth’s atmosphere acts like a weak prism. 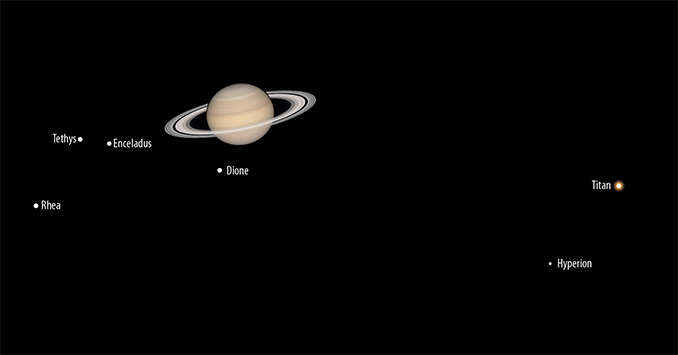 Saturn and the positions of its healthy crop of moons as positioned at around 1am BST on opposition night, 14/15 August.

Saturn’s classified as a gas giant planet with a diameter of 116,500 kilometres, 10 times that of Earth. Despite its huge volume and mass, it’s a much smaller planet than mighty Jupiter and lies twice as far away. Saturn’s globe appears 40 per cent as large as Jupiter’s, spanning at best 18.8 arcseconds (increasing to about 42 arcseconds along the ring’s major axis). Saturn is a much less active planet than Jupiter (though on occasion the odd white spot appears and storms can break out) and visually it doesn’t offer anywhere near such obvious banding. Modern imagers however are able to coax out a surprising number of well-defined bands and its North Polar Hood.

Saturn’s rings offer a changing aspect year-on-year. Since they were fully open (tilted by around 26 to 27 degrees towards us) in 2017 they have been closing up, with the planet’s north pole now tilted towards us by almost 14 degrees. They will lie edge-on to our line of sight in 2025.

The previously mentioned Ring A, the outermost ring, and Ring B, the brightest and broadest ring, are separated by the famous Cassini Division. We see it as a slim, jet-black gap which can be resolved through a 150mm (six-inch) telescope, though a 200-250mm (eight- to ten-inch) ‘scope might be a better bet at Saturn’s 2022 altitude.

One very interesting ring phenomenon to observe is their distinct, sudden brightening at opposition, a surge known as the Seeliger Effect. This occurs owing to their viewing angle reducing to zero, effectively hiding the ring particle’s shadows. It’s also possible to see Saturn’s jet-black shadow fall on the rings; this disappears when the planet is at or close to opposition. 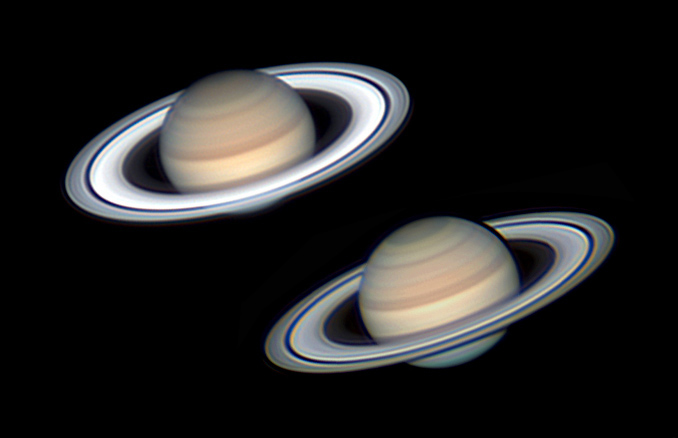 Look out for the sudden brightening of Saturn’s rings at opposition, the so-called Seeliger effect. Images: Eric Sussenbach.

Saturn has an impressive retinue of 62 moons, with seven major satellites, including giant Titan, Rhea, Tethys and Iapetus being visible through amateur instruments. Titan shines at magnitude +8.4 and is bright enough to be seen through steadily-held or mounted 10 x 50 binoculars. It orbits Saturn once every 15.94 days.

Iapetus, Saturn’s third-largest moon, is one of the strangest moons in the Solar System, sporting two vastly different hemispheres, one bright and one dark. When Iapetus lies at greatest western elongation (GEW) along its 79-day-orbit we see its bright face and it shines at magnitude +10.5, which makes it over two magnitude brighter than when it lies to Saturn’s east. Iapetus swung out to GEW on 7 August, so it should still shine bright.