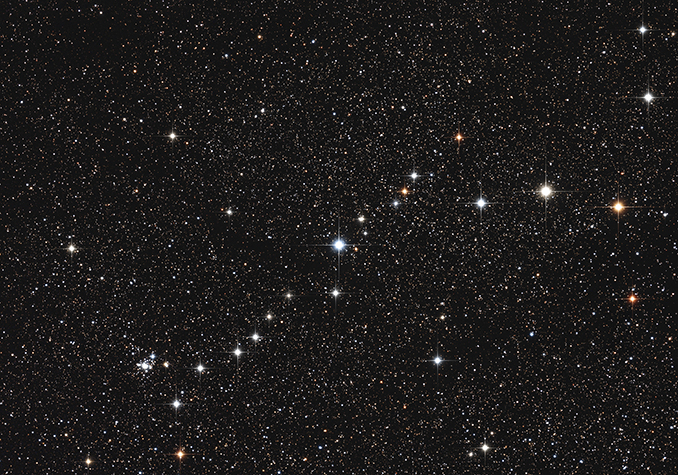 Observing the vast night sky should be fun and tracking down the numerous ‘unofficial’ asterisms – chance alignments of physically unrelated stars outside of the recognised constellations – is certainly that. One of the best for binocular observers is Kemble’s Cascade, in the ‘void’ of Camelopardalis.

The Cascade is a virtually straight line of 17 white, seventh- and eighth-magnitude stars running north-west to south-east for about 2.5 degrees (about half the field of view of 10×50 binoculars). About midway along is fifth-magnitude SAO 12969. To find Kemble’s Cascade, extend an imaginary line drawn from Caph (beta [β] Cas) to Segin (epsilon [ε] Cas) – the two end stars of the ‘W’ of Cassiopeia – by the same distance again (a span and a half of your fist, held at arm’s length).

The tiny, seventh-magnitude open cluster NGC 1502 (seven arcseconds across) lies at the south-eastern end of the Cascade should be visible in large binoculars on a transparent and moonless night from a dark site. Images show this as a beautiful object, with a handful of strongly coloured orange-red stars. 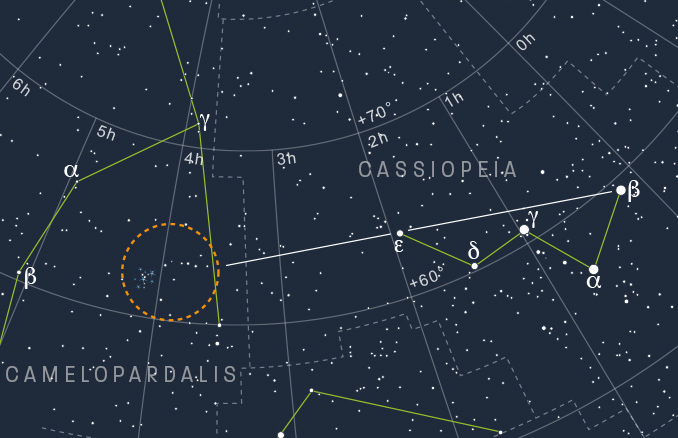 Use Cassiopeia to find Kemble’s Cascade. All AN graphic by Greg Smye-Rumsby.

Hunt down a mini ‘Cassiopeia W’

The great constellation of Cassiopeia, is located high in the north-east on late-summer nights. It’s named for Queen Cassiopeia who was rescued from the sea monster Cetus by the hero Perseus. Cassiopeia offers up one of the most well-known asterisms in the entire sky, its five main stars forming the distinctive and easy seen ‘W’ pattern. But were you aware that lying not too far away in Draco lies the ‘Little Queen’, a smaller, yet still striking version.

Draco is a large, sprawling constellation that now lies overhead. The ‘Little Queen’, or ‘Mini-Cassiopeia’ lies in Draco’s easterly region; look for it one degree south-east of magnitude +3.5 chi Draconis. The stars forming the ‘W’ figure shine between seventh- and ninth-magnitude, with the brightest member being magnitude +6.8 HIP 91163, and span about 20 x 10 arcminutes. A pair of 10 x 50 binoculars or a small telescope operating at low power will both give a good view. 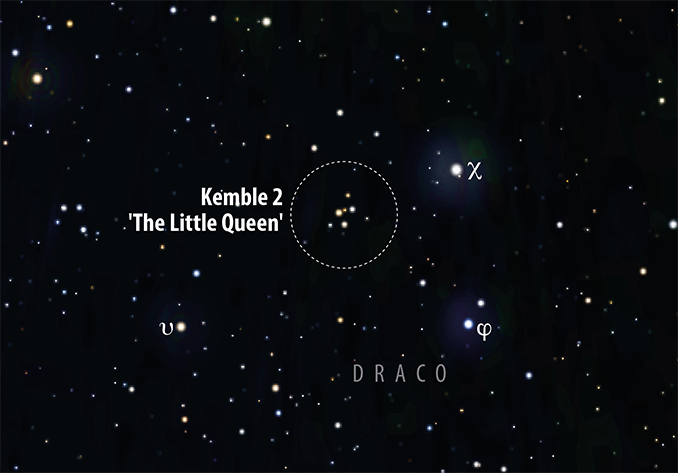