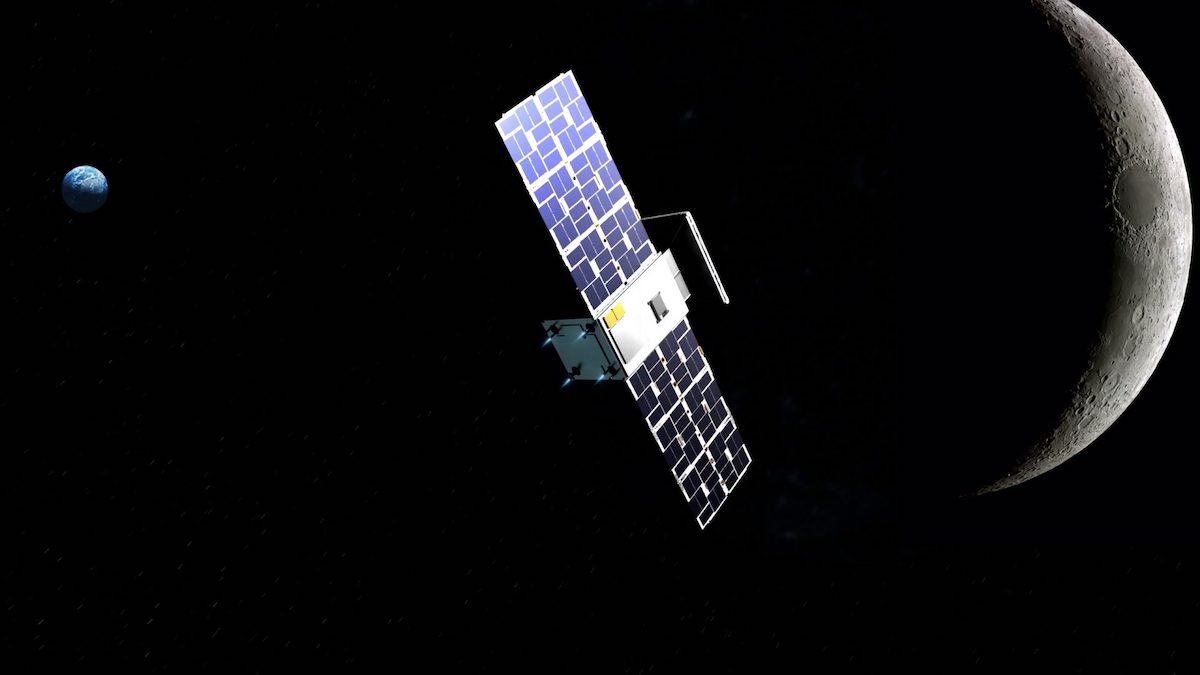 Artist’s illustration of the CAPSTONE spacecraft near the moon. Credit: Terran Orbital

NASA’s CAPSTONE spacecraft, a miniature pathfinder for future lunar crew missions, has overcome a communications outage and performed its first course correction maneuver since a Rocket Lab propulsion module gave the probe a final push toward the moon July 4.

The $30 million mission launched June 28 from New Zealand on a Rocket Lab Electron booster, a light launcher typically used to carry small satellites into low Earth orbit. With some adjustments, like saving weight by removing on-board cameras, the two-stage Electron launcher hauled into a low-altitude orbit a Rocket Lab-developed space tug called Lunar Photon and NASA’s CAPSTONE spacecraft, with a combined eight of about 660 pounds (300 kilograms).

The Lunar Photon, with solar panels, rechargeable batteries, and a small 3D-printed rocket engine of its own, propelled the 55-pound (25-kilogram) CAPSTONE spacecraft into ever-higher orbits with a sequence of seven burns over six days, finally nudging the small satellite on a trajectory to carry it more than three time farther than the moon.

CAPSTONE stands for the Cislunar Autonomous Positioning System Technology Operations and Navigation Experiment. The mission is a public-private partnership between NASA, which funded the project, and a small company in Boulder, Colorado, named Advanced Space, which owns the spacecraft.

The mission will scout a halo-like, elongated orbit around the moon that NASA has chosen for a future mini-space station called the Gateway. The Gateway station, part of NASA’s Artemis lunar program, will serve as an experiment platform and a stopover for astronauts traveling between Earth and the surface of the moon.

No other spacecraft has flown in the unique path around the moon, called a near rectilinear halo orbit, or NRHO. The halo orbit will take CAPSTONE — and eventually the Gateway station — as close as 1,000 miles (1,500 kilometers) from the moon’s North Pole and as far as 43,500 miles (70,000 kilometers) from the South Pole. Each orbit of the moon will last about six-and-a-half days, according to NASA.

The CAPSTONE spacecraft, about the size of a microwave oven and built by Terran Orbital, separated from Rocket Lab’s Lunar Photon propulsion module July 4 to begin the next phase of its journey.

But 11 hours later, after deploying its solar panels and completing initial activation steps, CAPSTONE stopped communicating with its control team on Earth. After a tense wait, engineers received signals from the spacecraft again July 6, and confirmed CAPSTONE was still in good shape on the way to the moon.

Advanced Space said the interruption in communications with CAPSTONE was caused by an “improperly formatted command that triggered a radio vulnerability.” The issue was “compounded by a spacecraft flight software contingency response fault,” Advanced Space said.

“The system was ultimately recovered by the team as a result of autonomous flight software system operations that cleared the fault and brought the system back into communication with the ground. During the communications outage the spacecraft autonomously operated, maintained pointing, battery charge, and performed a momentum desaturation maneuver,” the company said in a statement. 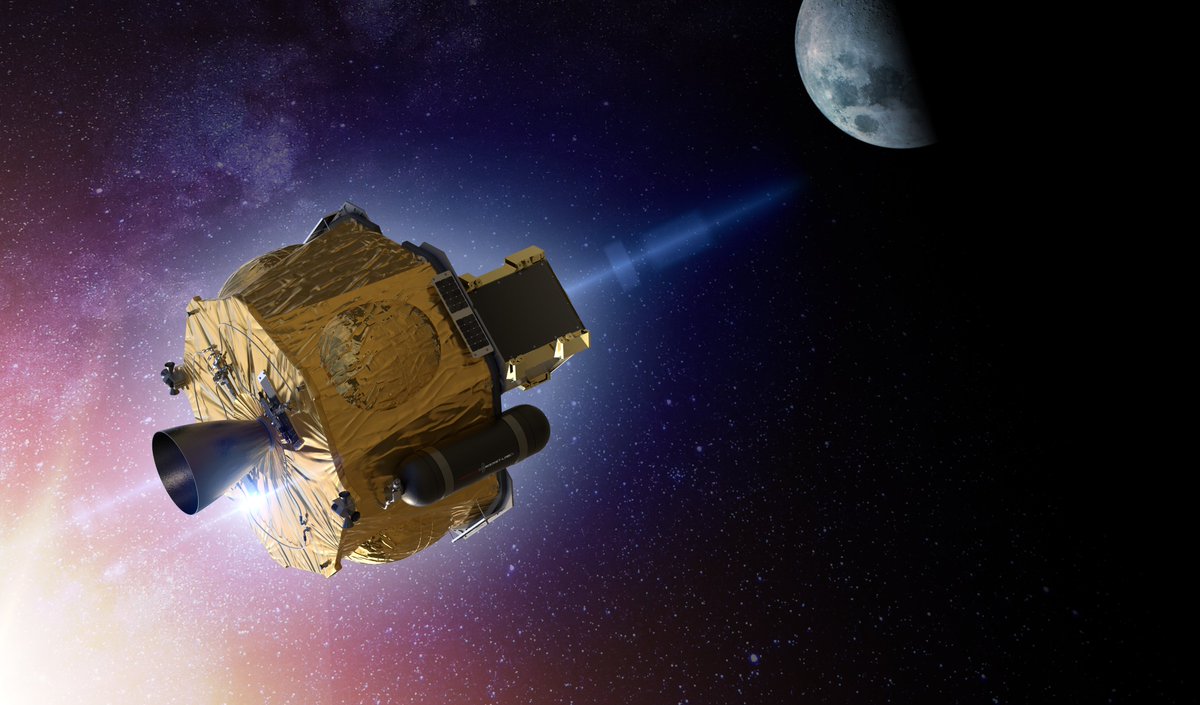 With the communications link restored, ground controllers uplinked a command for CAPSTONE to fire its propulsion system in a course correction maneuver Thursday, July 7. The burn changed the spacecraft’s velocity by about 44.4 mph (19.85 meters per second), close to the maneuver’s planned performance.

The adjustment gave an extra boost to CAPSTONE, moving the craft onto a trajectory that will take it about 870,000 miles (1.4 million kilometers) from Earth, somewhat farther than the previous trajectory. That’s about 3.6 times the distance of the moon.

The spacecraft has eight small hydrazine-fueled thrusters for deep space maneuvers. CAPSTONE’s rocket firing Thursday was good enough for mission managers to cancel a follow-up maneuver that would have “cleaned up” any errors from the first course correction.

Advanced Space said Saturday that officials decided to delay the mission’s third planned burn to review additional data and evaluate the spacecraft’s performance during maneuvers. With the good performance of CAPSTONE’s first burn, it’s possible the third maneuver may not be required, the company said.

“The spacecraft is healthy, communicating with NASA’s Deep Space Network (DSN) and in a nominal state,” Advanced Space said Saturday.

It will take more than a month for CAPSTONE to reach its farthest distance from Earth, before the spacecraft is pulled back toward the moon with help of the natural tug from the sun’s gravity. On Nov. 13, the CAPSTONE spacecraft will arrive near the moon and fire its thrusters to steer into the near rectilinear halo orbit.

CAPSTONE’s four-and-a-half month voyage to its final orbit near the moon takes much longer than the three-to-four day trip flown by astronauts in NASA’s Apollo program. But CAPSTONE’s path, called a “ballistic lunar transfer” is more fuel efficient, requiring fewer, lower-impulse thruster firings to do the job.

The CAPSTONE mission will demonstrate the fine maneuvers to steer a spacecraft into the Gateway’s orbit, which requires only small amounts of fuel to maintain. NASA managers like the near rectilinear halo orbit because spacecraft and lunar landers can enter and exit the orbit with low-impulse thruster burns, and a station in such an orbit will have a continuous communications link with Earth.

A spacecraft in the halo orbit will alternate between the influence of Earth’s gravity and the moon’s gravity, a balance that navigators will attempt to refine with CAPSTONE’s help.

A lunar lander departing the Gateway’s orbit will be able to ferry astronauts to the moon’s South Pole, where scientists have discovered water ice in permanently shadowed craters.

CAPSTONE will also conduct deep space navigation experiments by establishing a radio link with NASA’s Lunar Reconnaissance Orbiter, a larger spacecraft that has been circling the moon in a low orbit since 2009.