Liftoff occurred at 8:56 a.m. CDT (13:56 UTC) Aug. 4, 2022, from Blue Origin’s launch site just north of Van Horn, Texas. This launch marked the sixth time the New Shepard rocket and capsule has carried humans past the Karman line, and the 22nd flight overall for the company. 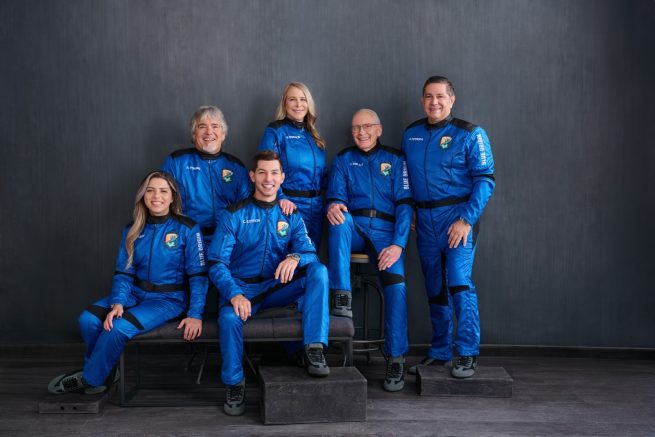 “It’s an honor for our team to provide our customers with a life-changing shift in perspective of our fragile planet,” Phil Joyce, Blue Origin’s senior vice president for New Shepard, said in a company news release. “It’s been just over a year since New Shepard’s first human flight, and we have now flown 31 humans above the Kármán line. Thank you to these early pioneers in helping us realize our vision of millions of people living and working in space for the benefit of Earth.”

Cotton is cofounder of the highly popular “Dude Perfect” YouTube channel, known for videoing outrageous sport stunts. He was selected as part of a voting process through the MoonDAO program, a crypto site that hopes to one day decentralize access to space.

Vanessa O’Brien is an avid adventurist. With this flight, she became the first woman to complete the Guinness World Records Explorers’ Extreme Trifecta, which includes diving the Challenger Deep, summering Mount Everest, and flying into space.

The mission also included the first Egyptian to fly into space. Sara Sabry is the founder of the Deep Space Initiative, and was sponsored by the Space for Humanity organization to take today’s flight.

The flight, on par with all other New Shepard missions, lasted approximately 10 minutes on a suborbital trajectory, taking its passengers to an altitude of approximately 107 kilometers (66 miles) straight up. This flight marked the 23rd consecutive successful capsule landing, the third flight for Blue Origin this year, and the 8th launch and landing of the NS4 booster.