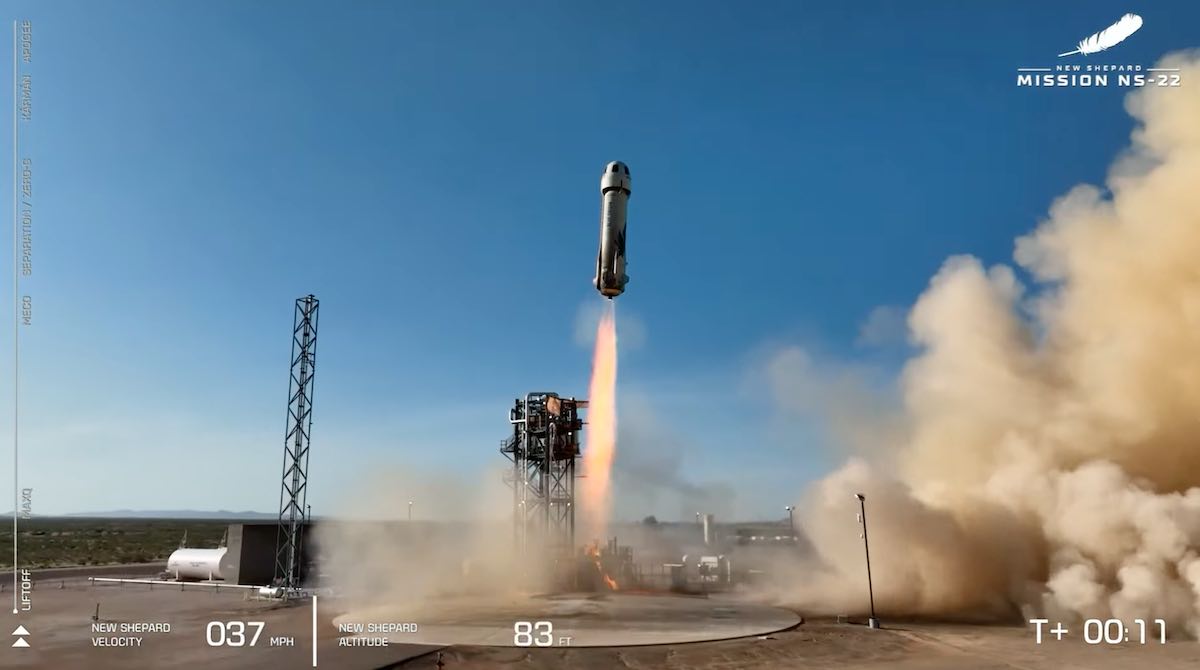 Blue Origin launched six more people on a quick, 10-minute flight to suborbital space Thursday from West Texas. A popular YouTuber and the first people from Egyptian and Portugal to fly above the internationally-recognized boundary of space were among the commercial passengers.

A single-stage New Shepard rocket built for the space tourism and suborbital research market carried the six passengers to an altitude of about 351,000 feet (107 kilometers), above the the edge of space as defined by the international record-keeping body for aeronautics.

The six passengers on Blue Origin’s NS-22 mission included Coby Cotton, one of five cofounders of the popular Texas-based YouTube channel “Dude Perfect.” Cotton’s seat was arranged through MoonDAO, a decentralized autonomous organization whose members voted on who should represent them in a seat purchased by the group.

Quartz reported Thursday that MoonDAO, which typically works in cryptocurrency, paid about $2.5 million for two seats on Blue Origin flights, including Cotton’s ride Thursday. MoonDAO’s payment to Blue Origin — at about $1.25 million per ticket — is the first public figure available for the price to ride a Blue Origin rocket to suborbital space.

The Dude Perfect crew held a model rocket launch competition to determine which of the cofounders would get the MoonDAO seat on Blue Origin’s rocket. Cotton, 35, had the highest-flying rocket and won the ticket.

Sara Sabry, a 29-year-old Egyptian engineer working in Berlin, was selected for her seat on the NS-22 mission by a nonprofit called Space for Humanity, which seeks to expand access to space for all people. She became the first Egyptian to fly to space. 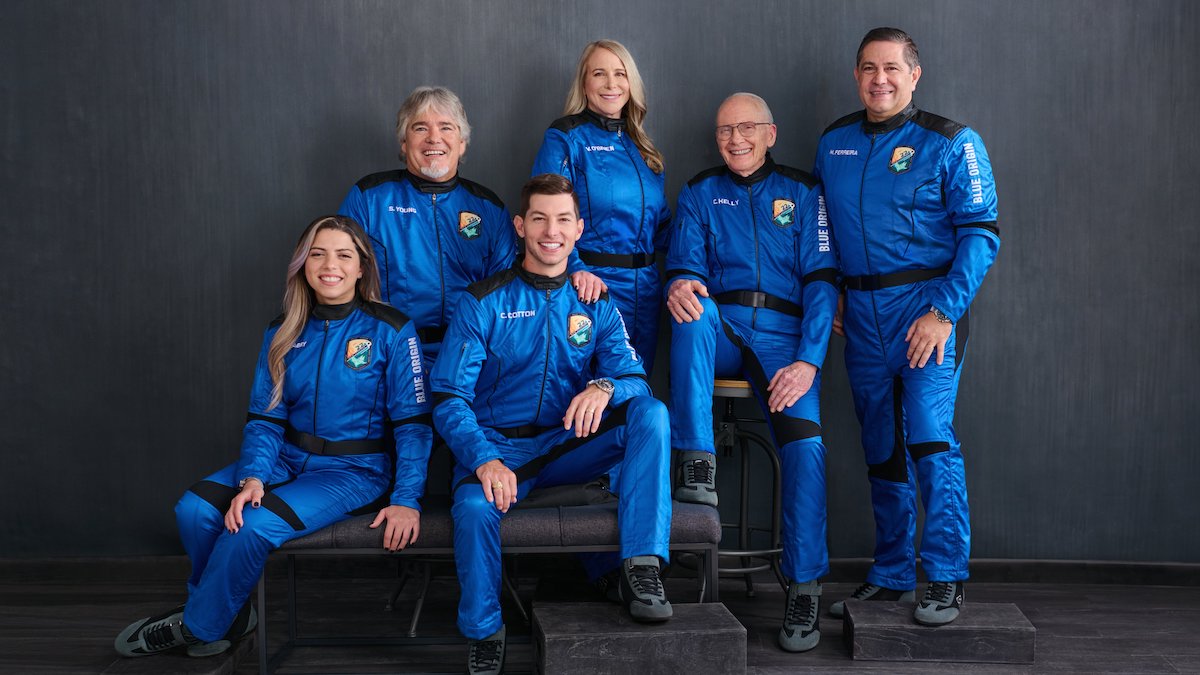 Mário Ferreira, 54, also took a seat on the Blue Origin crew capsule on top of the New Shepard rocket. He is an investor and entrepreneur, and became the first person from Portugal to fly to space.

The other passengers included Vanessa O’Brien, an experienced British-American mountaineer and adventurer who became the first women to reach the top of Mount Everest, the deepest point in the world’s oceans, and fly in space.

Clint Kelly III, technology pioneer who helped pave the way for driverless cars, also flew to to space Thursday. And Florida native Steve Young, a businessman who made his fortune in the telecom industry, rounded out the six-seat crew cabin.

In preparation for Thursday morning’s mission, Blue Origin rolled the New Shepard to the launch pad overnight and raised it vertical for final checkouts. The single-stage rocket stands about 60 feet, or 18 meters, tall and is powered by one BE-3 engine burning a mix of super-cold liquid hydrogen and liquid oxygen propellants.

The launch team loaded the cryogenic propellants into the New Shepard booster early Saturday, while the six passengers finished preparations at a nearby facility the company calls “Astronaut Village.”

The passengers, who didn’t wear pressurized spacesuits for their 10-minute ride to space, traveled to the launch pad and boarded the crew capsule on top of the New Shepard booster about 30 minutes before liftoff. The ground support team closed the hatch and moved to a fallback position for launch.

The rocket’s BE-3 engine ignited and throttled up to full power, then clamps released to allow the New Shepard booster to begin a vertical climb away from its launch pad. The BE-3 produced about 110,000 pounds of thrust at full power, firing for about 2 minutes, 20 seconds, to propel the New Shepard and its six passengers toward space.

After engine cutoff, the crew capsule separated from the booster to begin independent arcing trajectories, passing above the von Kármán line — the internationally recognized boundary of space — at an altitude of about 62 miles (100 kilometers) for a couple of minutes. That gave the passengers in the capsule time to unstrap from their seats and float around the pressurized cabin, enjoying expansive views through the largest windows ever flown in space.

“We’re doing it!” one of the Blue Origin passengers as the crew capsule climbed into space. “Look at the blackness!”

The passengers returned to their seats and strap in before the spacecraft fell back into the thicker layers of the atmosphere, bracing for parachute deployment and touchdown on the desert floor a few miles from the launch site. The entire flight from liftoff to landing of the capsule lasted about 10 minutes.

“The parachutes are out!” one of the passengers said, perhaps half-seriously and half-jokingly. “We’re not going to die! … Our poor families.”

Meanwhile, the reusable booster descended back to Earth and accomplished a propulsive vertical touchdown on a landing pad a few minutes before the return of the capsule. The flight Thursday marked the 22nd launch of a New Shepard booster, and the eighth flight by this particular rocket.