BepiColombo’s stunning close pass by Mercury on Thursday provides a prelude of what’s to come.

Welcome (briefly) to Mercury, with a planetary flyby hinting at more to come. The joint European Space Agency/Japanese Aerospace Agency’s BepiColombo spacecraft treated us to just that on Thursday, June 23rd, passing just 200 kilometers from the surface of the innermost world at 9:44 Universal Time (UT). During that brief encounter, BepiColombo got a brief glimpse of its final destination.

“We have completed our second of six Mercury flybys and will be back this time next year for our third before arriving in Mercury orbit in 2025,” Says Emanuela Bordoni (ESA-BepiColombo Deputy Spacecraft Operations Manager) in a recent ESA press release.

The spacecraft approached Mercury from the planet’s night side, then began imaging the cratered surface about five minutes after closest approach as the Sun rose over the illuminated terrain below. The images were taken courtesy of the three monitoring cameras (MCAM) aboard the spacecraft. 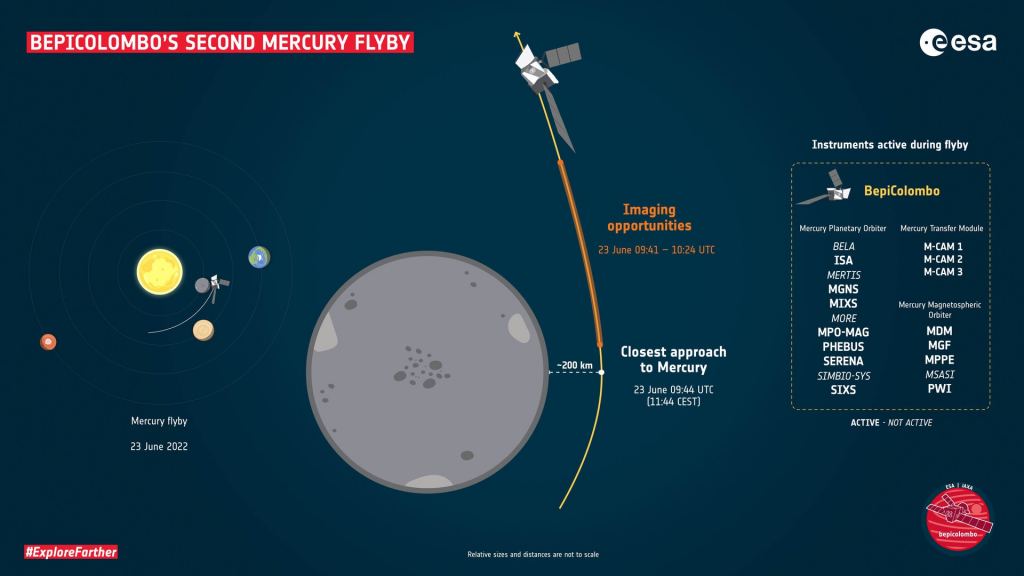 The Long Road to Mercury

This is the second Mercury flyby for the spacecraft of six overall that BepiColombo must perform before arriving in orbit around Mercury in December 2025. Launched on October 20, 2018 from Guiana Space Center atop an Ariane-5 rocket, the spacecraft also performed an Earth flyby on April 10, 2020, and two Venus flybys in 2020 and 2021. Ironically, getting deep into the inner solar system and entering orbit around an inner planet is a complex and time-consuming process, as the spacecraft must bleed off momentum during each successive planetary flyby. 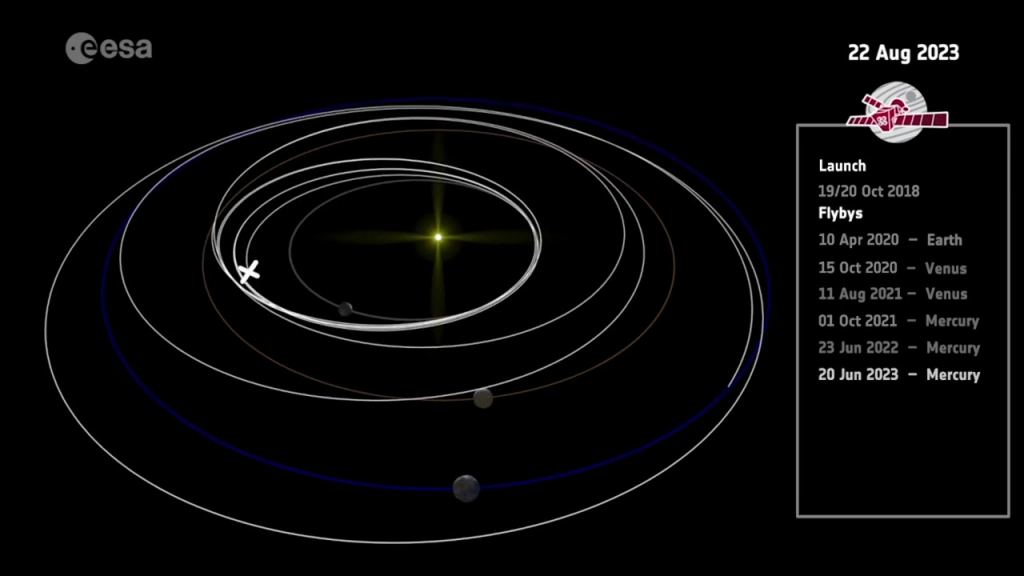 BepiColombo is actually two spacecraft in one: the Mercury Magnetospheric Orbiter (MMO) and the Mercury Planetary Orbiter (MPO). The spacecraft takes its name from 20th century scientist Giuseppe ‘Bepi’ Colombo, and the MMO is dubbed ‘Mio,’ Japanese for river or waterway.

Together, the stacked pair will separate after orbital insertion, and will probe Mercury once science operations begin in 2026. The pair will examine the planet from its core, interior and surface terrain, out through its magnetosphere and tenuous atmospheric sodium ‘tail’. Already, BepiColombo provided science observations during its first Mercury flyby on October 1, 2021, and we can expect to see more data gathered from this pass. ESA spacecraft controllers are happy to see BepiColombo performing nominally, and all instruments are in good health.

BepiColombo is now the third spacecraft to reach Mercury, after the Mariner 10 flyby in 1973 and NASA’s Mercury Messenger in 2011 to 2015. The spacecraft will also become the second mission to enter orbit around Mercury, after Messenger. BepiColombo will build upon data and science collected by Messenger, which completed its mission by crashing into Mercury on April 30, 2015, becoming the first human artifact to touch the innermost world. 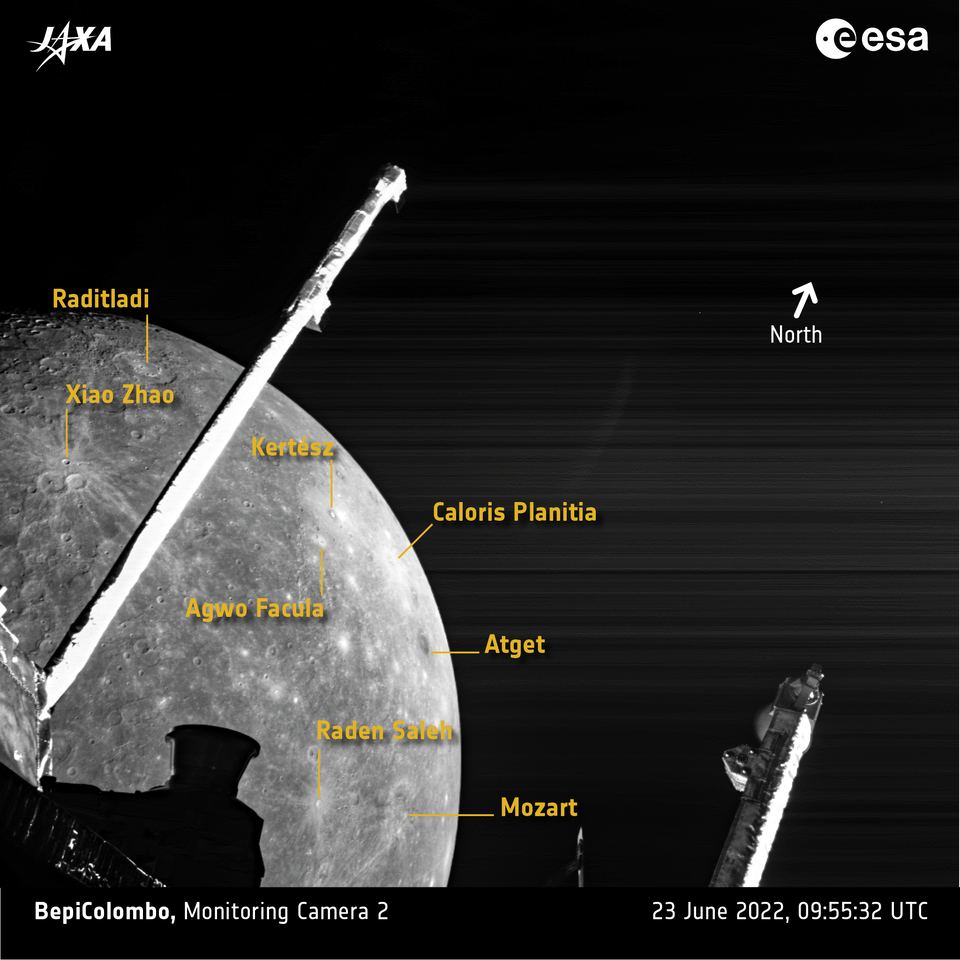 The images from the second flyby reveal the ancient cratered surface of Mercury, appearing much like our own Moon. Prominent features such as the Caloris Basin a massive 1,550 kilometer-wide impact feature are visible. The volcanic lavas around the basin are thought to predate the basin itself by several hundred million years, and could provide crucial clues to the geological history of Mercury. 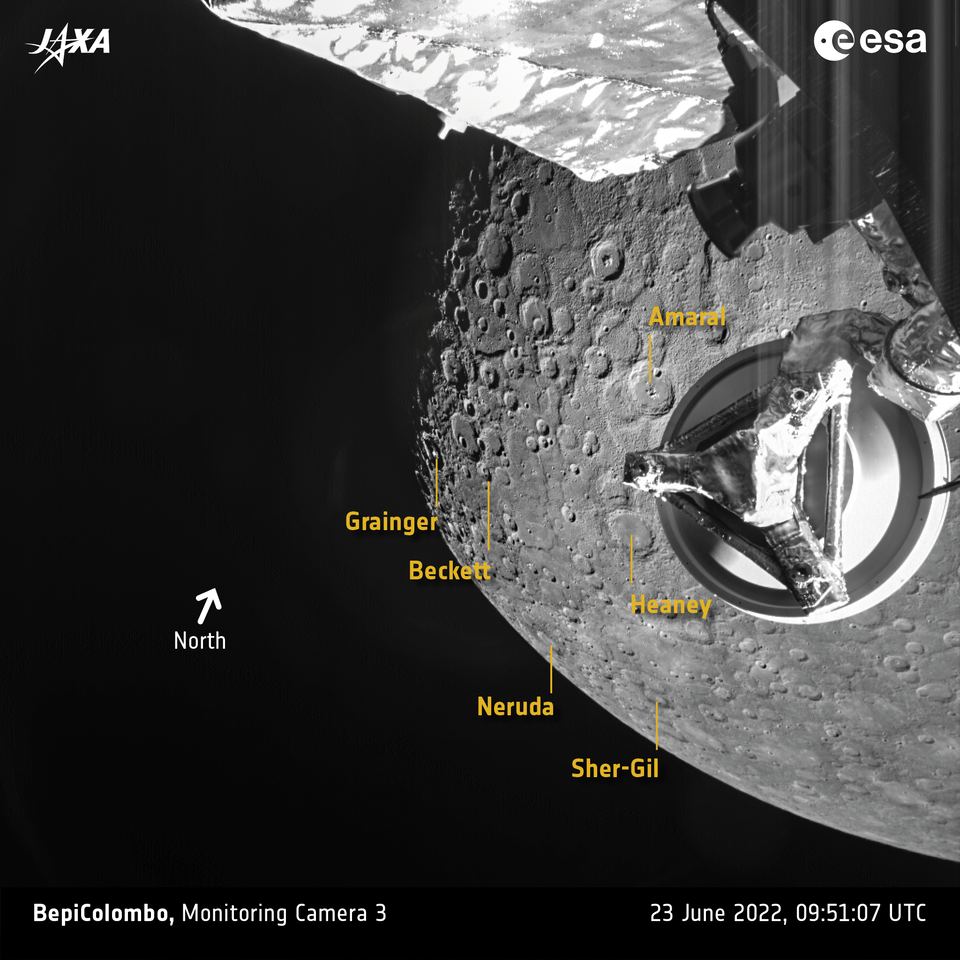 “Mercury flyby one images were good, but flyby two images are even better,” says David Rothery (Open University) in a recent press release. “The images highlight many of the science goals that we can address when BepiColombo gets into orbit.”

You can see Mercury now low in the dawn sky in June, as the most challenging planet in the current dawn solar system lineup.

The dawn sky, looking east on the morning of June 25th. Credit: Stellarium

It’s amazing that we live in an era where we can now discuss topics like the ‘planetary geology’ of Mercury. Thanks to spacecraft like BepiColombo, these enigmatic worlds that have remained mere points of light for centuries have now become dynamic and exciting worlds in their own right.