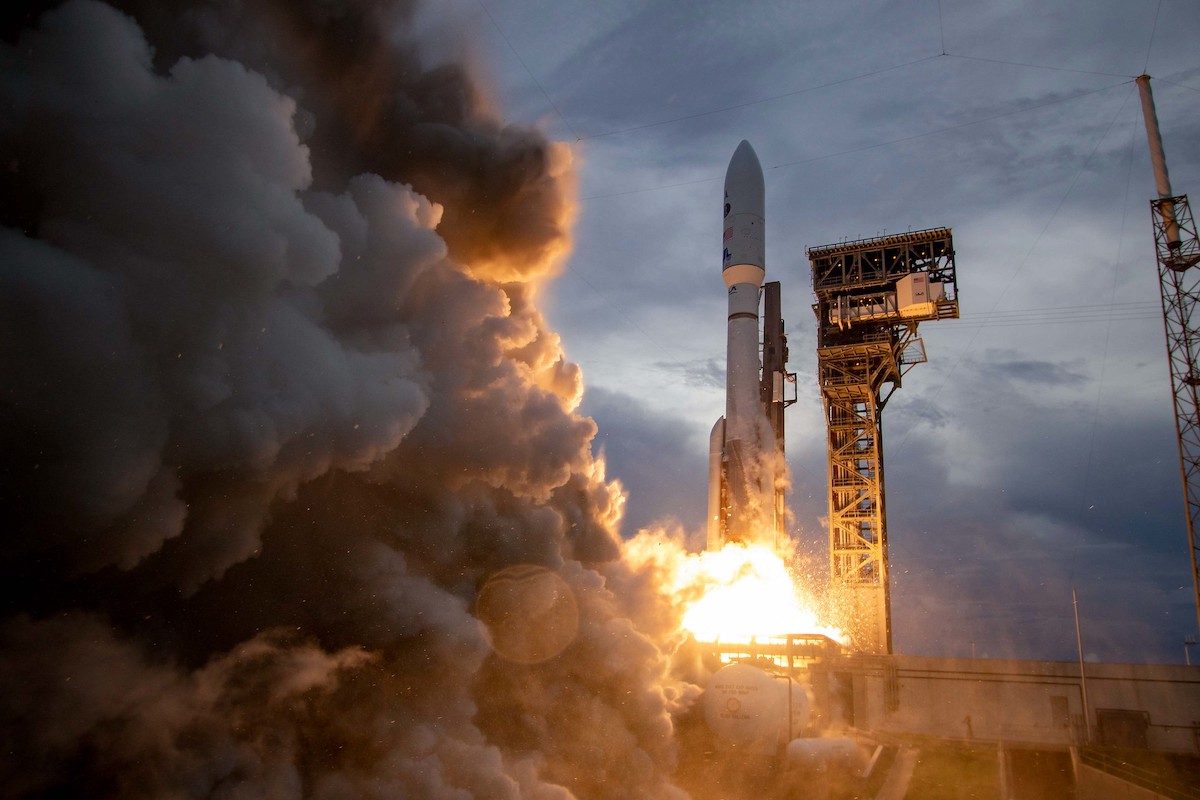 A United Launch Alliance Atlas 5 rocket fired off its launch pad at Cape Canaveral Friday on a six-hour climb to geosynchronous orbit, deploying a classified payload and a U.S. Space Force satellite to test an improved infrared heat-sensitive sensor design that could help detect and track enemy hypersonic missiles.

The mission, designated USSF-12, released the two Space Force satellites into an on-target orbit more than 22,400 miles (about 36,100 kilometers) over the equator, according to ULA. The spacecraft are expected to maneuver into their final operating positions a couple hundred miles lower in the geostationary belt, where they will orbit in lock-step with Earth’s rotation.

One of the payloads, called the Wide Field of View Testbed, will demonstrate a new instrument design that could help give the military better warning of a missile attack. The USSF-12 Ring spacecraft, riding below the WFOV Testbed payload during the launch sequence, hosts classified experiments and tech demo payloads.

Launching a day late after stormy weather scrubbed a countdown Thursday, the Atlas 5 ignited its Russian-made RD-180 main engine and four strap-on solid rocket boosters at 7:15 p.m. EDT (2315 GMT) Friday to kick off the fourth mission of the year for United Launch Alliance, a 50-50 joint venture between Boeing and Lockheed Martin.

The countdown Friday was also delayed by bad weather. The Atlas 5 launch team waited more than an hour for electrically charged anvil clouds and upper level winds to become more favorable for liftoff.

The weather concerns cleared, and ULA engineers gave approval to commence the final four minutes of the countdown, culminating in the Atlas 5’s fiery departure from Florida’s Space Coast.

The rocket headed east, riding 2.3 million pounds of thrust, and exceeded the speed of sound in less than a minute as it disappeared into an overcast cloud deck. On-board cameras showed the rocket jettison its four boosters and payload fairing as the kerosene-fueled RD-180 engine powered the Atlas 5 for the first four minutes of the flight.

The RD-180 engine hit its marks Friday, giving good performance to begin the mission for the Space Force. Friday’s launch marked the 100th flight of an RD-180 engine — all successful — since its debut on a Lockheed Martin Atlas 3 rocket in May 2000. The Atlas 3 was a bridge program between the older versions of the Atlas rocket family and the Atlas 5.

ULA is retiring the Atlas 5 and ending its use of Russian engines. After Friday night’s flight, the company has 22 Atlas 5 missions left on the books. ULA’s new rocket, the Vulcan Centaur, will be powered by all U.S. engines.

After the first stage completed its burn and separated to fall into the Atlantic Ocean, the Atlas 5’s Centaur upper stage lit an Aerojet Rocketdyne RL10 engine for the first of three firings to place the USSF-12 payloads into their target orbit.

The first two burns placed the satellites into a parking orbit, and then an elliptical, or oval-shaped transfer orbit. The Centaur upper stage coasted to the target altitude more than 22,000 miles above Earth, the reignited the RL10 engine to circularize its orbit.

The WFOV Testbed spacecraft separated from the Centaur stage at 1:04 a.m. EDT (0504 GMT). A special adapter structure released about 10 minutes later, allowing the USSF-12 Ring spacecraft to deploy from the rocket at 1:20 a.m. EDT (0520 GMT) Saturday.

ULA declared the launch a success in a press release early Saturday.

“This mission once again demonstrated ULA’s unmatched capability of precisely delivering the country’s most critical assets to a highly complex orbit,” said Gary Wentz, ULA vice president of government and commercial programs. “Our strong partnership with the USSF team is essential to maintain our nation’s security advantages and achieve robust mission assurance.” 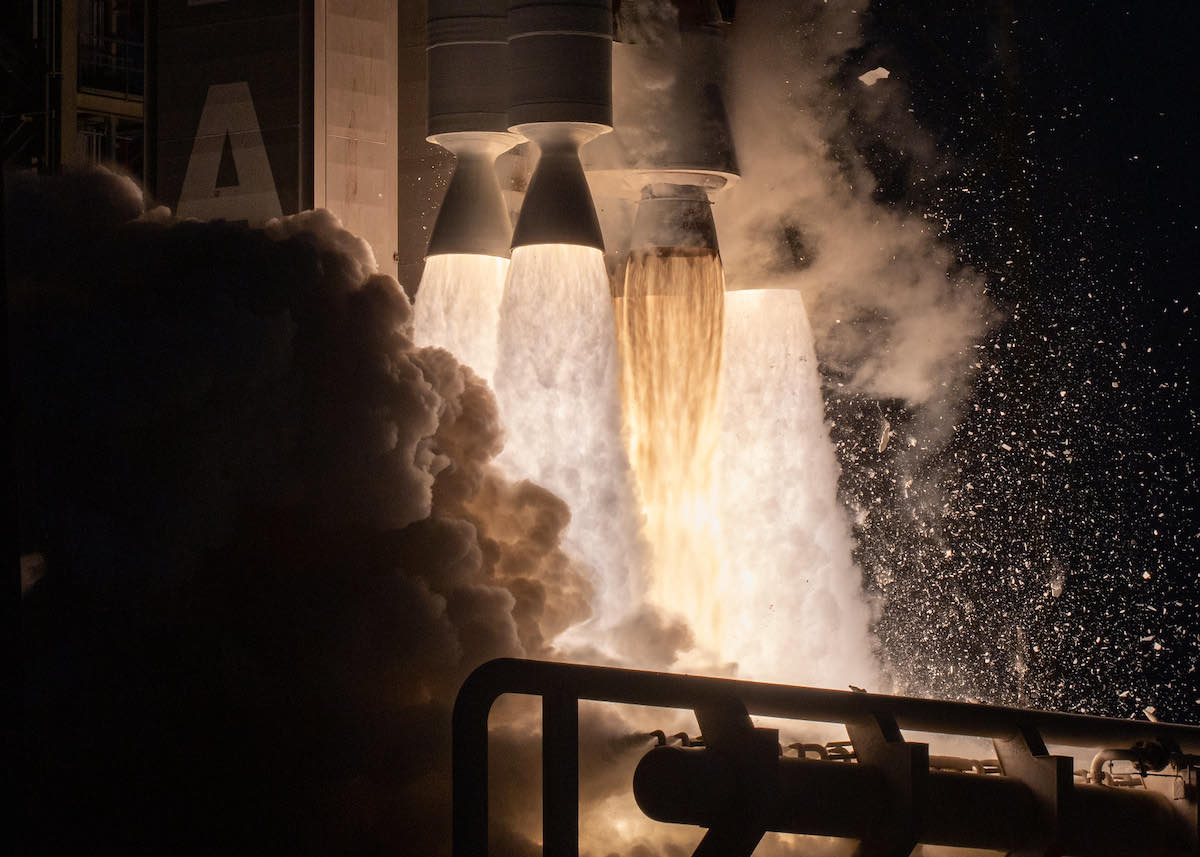 The Space Force’s Wide Field of View, or WFOV, Testbed surveillance satellite was one of the payloads on the USSF-12 mission. The WFOV Testbed satellite is demonstrator for a next-generation space-based sensor designed to detect rocket launches and provide early warning of a missile attack.

Built in El Segundo, California, by Millennium Space Systems, a subsidiary of Boeing, the WFOV Testbed satellite carries an optical staring instrument to detect the exhaust plumes from missile launches, demonstrating the wide-area sensor for future use in the military’s operational early warning systems.

The WFOV mission will demonstrate the optical sensor technology for use on future missile warning missions in the Space Force’s Overhead Persistent Infrared, or OPIR, program. The next-generation OPIR missions will replace the Space Based Infrared System, or SBIRS, missile warning satellites that currently provide missile detection and early warning coverage.

The Space Force is partnering with the Space Development Agency and the Missile Defense Agency on a next-generation fleet of missile warning satellites in low Earth orbit and geosynchronous orbit.

The Atlas 5 has shed its composite payload shroud to reveal the USSF-12 payloads to the space environment. https://t.co/f4AQ790G43 pic.twitter.com/4okTeGgnvi

The infrared sensor on the WFOV Testbed satellite was developed by L3Harris. The Space Force said the infrared instrument has “first in its class sensor sensitivity” across its wide field of view, capable of tracking dim targets over large areas. The new sensor technology is necessary as threats shift from primarily large ballistic missiles to smaller projectiles, such as hypersonic cruise missiles.

“The threat is certainly evolving at an unprecedentedly fast pace that we haven’t seen before,” Denaro said. “We’re looking at a range of targets and missiles in the hypersonic domain that are far more maneuverable, they’re dimmer, they’re harder to see. And that’s requiring a new approach to how we both detect and then track all these missiles throughout their flight. “We’re seeing these developments both in China and in Russia at a very fast pace, to which we need to develop these overhead systems that are able to evolve to keep pace with those changing directions,” Denaro said.

The WFOV Testbed “can simultaneously perform strategic missions, such as missile warning and battlespace awareness, as well as tactical missions directly supporting the warfighter, by continuously monitoring up to one-third of the Earth’s surface with just a single sensor,” said Col. Heather Bogstie, senior materiel leader for resilient missile warning, tracking, and defense at Space Systems Command.

The L3Harris instrument also features a “tactical cryocooler” to chill its infrared detectors. The lower-cost cryocooler was originally designed to fly on airplanes, but has been repurposed for operating in space. 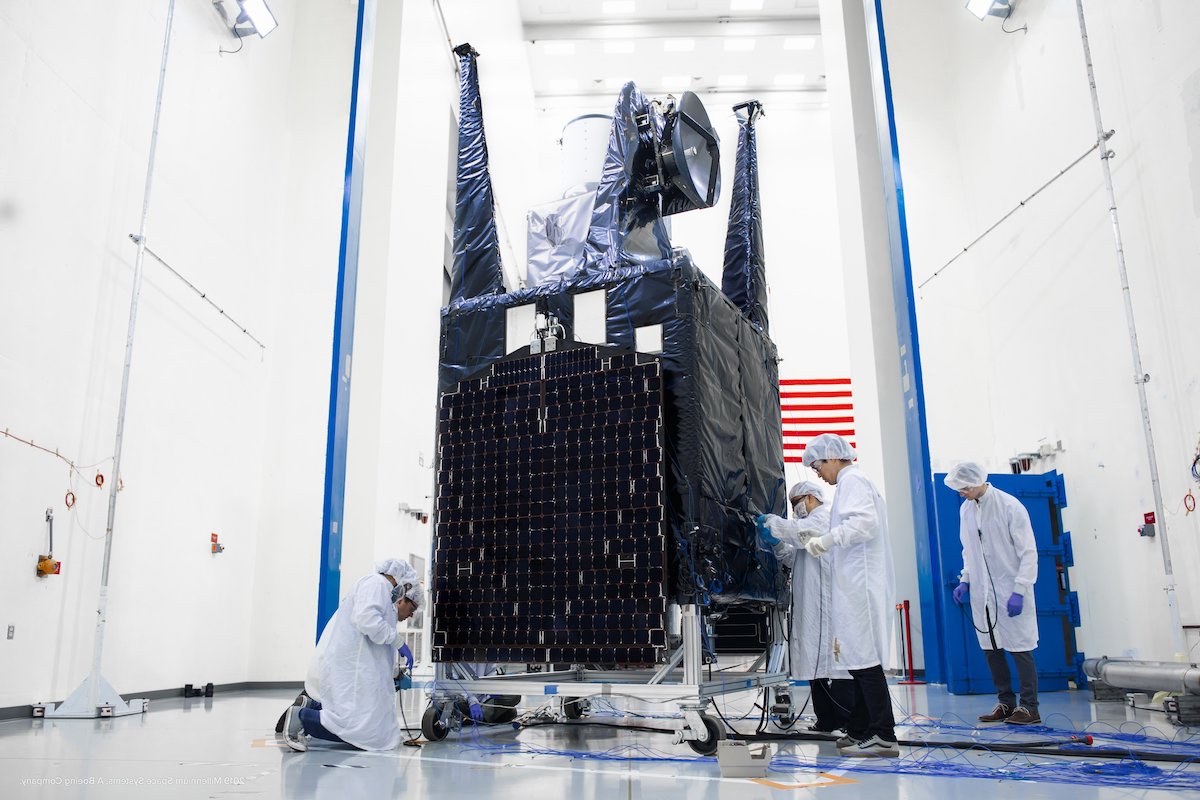 The missile warning demonstration satellite — about one-fourth the size of the Space Force’s current-generation SBIRS satellites — is designed for a mission of three years, with a total mass of up to 6,600 pounds (3,000 kilograms), according to Millennium.

The L3Harris payload stands more than 6 feet (2 meters) tall and weighs more than 365 miles (165 kilograms). The instrument was developed at an L3Harris facility in Wilmington, Massachusetts.

“The L3Harris instrument can stare continuously at a theater of interest to provide ongoing information about the battlespace, which is an improvement over legacy systems,” said Ed Zoiss, president of space and airborne systems at L3Harris. “It also provides better resolution, sensitivity and target discrimination at a lower cost.”

The second satellite on-board the USSF-12 mission carries a suite of classified payloads.

The Space Force says the USSF-12 Ring spacecraft is based on a “ring-based structure” capable of hosting multiple experiments and prototype technologies. The military has not said what experiments might be mounted on the USSF 12 Ring spacecraft, or whether it carries deployable free-flyer satellites that will separate from the parent spacecraft to perform their own missions. 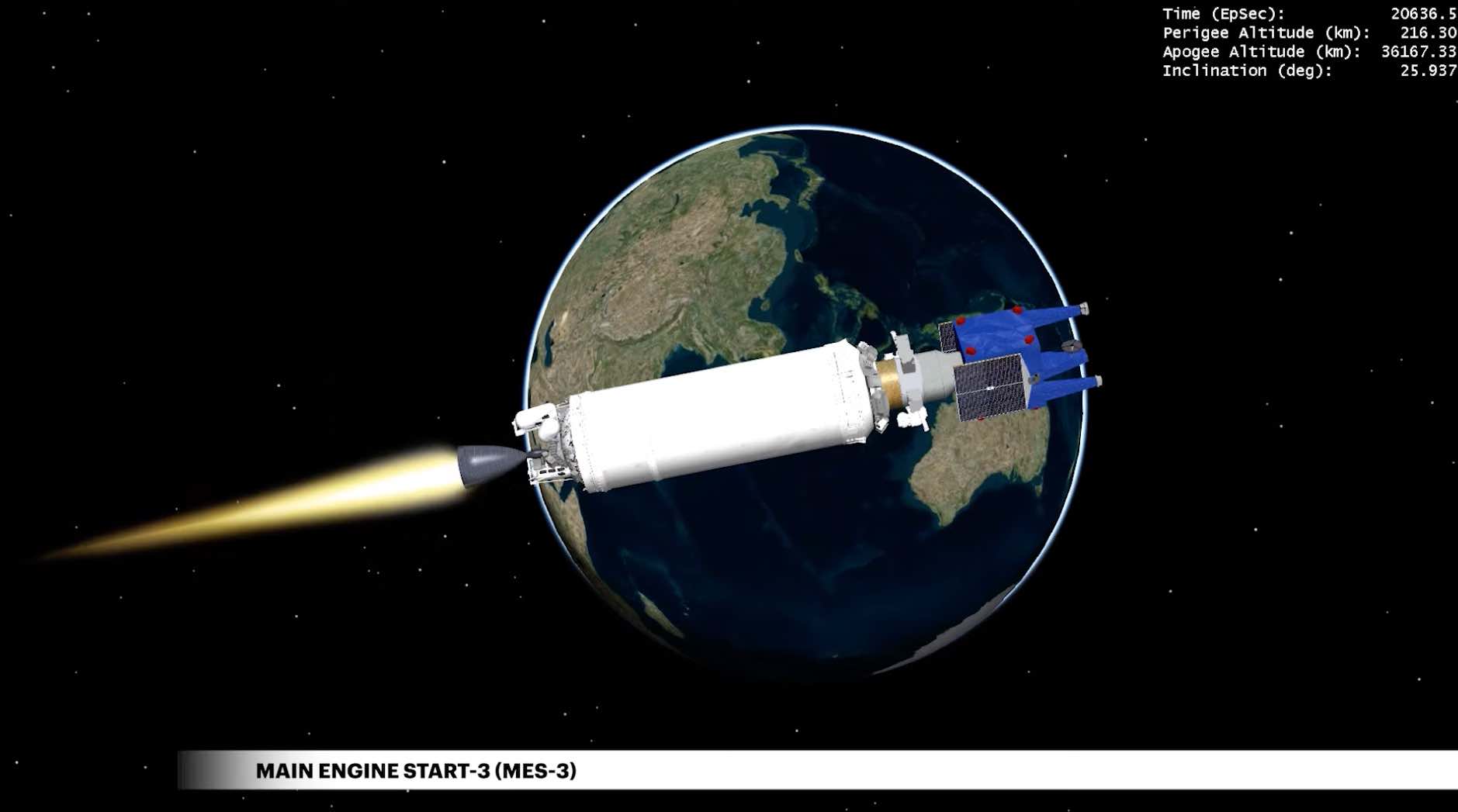 The Atlas 5 rocket’s Centaur upper stage performed a third burn to insert the WFOV Testbed and USSF-12 ring satellites into a near-geostationary orbit. This illustration shows the Centaur firing its RL10 engine, with the WFOV Testbed spacecraft in the upper position on the dual-payload stack, and the USSF-12 Ring vehicle in the lower position. Credit: United Launch Alliance

ULA’s next mission is scheduled for August with the SBIRS GEO 6 missile warning satellite.

The launch company has up to six more missions on its calendar for the rest of the year, including the SBIRS launch and the final flights of the Delta 4-Heavy rocket and Atlas 5 rocket from the West Coast spaceport at Vandenberg Space Force Base, California. The remaining Delta 4 and Atlas 5 flights will all lift off from Cape Canaveral.

ULA hopes to launch the first next-generation Vulcan Centaur rocket from Florida by the end of the year. And the first crew flight on Boeing’s Starliner spacecraft could launch on an Atlas 5 rocket in late 2022.