Neutron stars are dense remnants of large stars. They are the collapsed cores of stars formed during a supernova explosion. While we know generally how they form, we are still learning how they evolve, particularly when they are young. But that’s starting to change thanks to large sky surveys, which have allowed astronomers to observe a neutron star that could be little more than a decade old.

The neutron star in question is known as VT 1137-0337. It is in a dwarf galaxy about 400 million light-years away, and it was first seen in 2018 as part of the Very Large Array Sky Survey (VLASS). VLASS is a seven-year project to create a radio map of the sky. When finished it will have mapped about 80% of the sky over the course of three separate runs. After first capturing an image of VT 1137-0337 in 2018, it saw the neutron star again in 2019, 2020, and 2022. So we know it isn’t just a transient radio burst of some kind. Based on observations, the object is most likely a pulsar wind nebula. As the neutron star rotates, its magnetic field and energy beams sweep through the surrounding nebula, causing gas in the nebula to ionize and emit radio light. 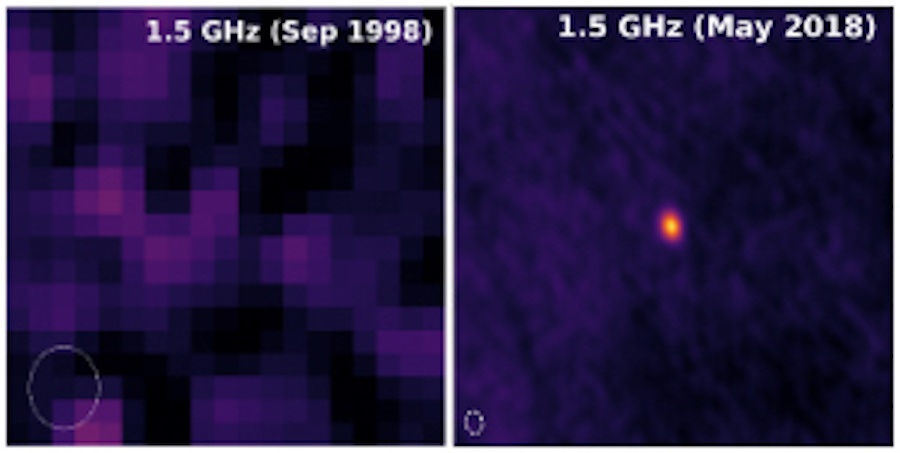 What’s interesting about VT 1137-0337 is that it wasn’t seen in an earlier VLA sky survey known as Faint Images of the Radio Sky at Twenty-Centimeters (FIRST), made in 1998. So somewhere between 1998 and 2018 the neutron star appeared. On the face of it, that would make VT 1137-0337 less than twenty years old, but it could be a bit older. It’s possible the neutron star existed in 1998, but the surrounding nebula was still dense enough to block radio light from reaching us. But given the rate at which supernova remnants expand, the fog should have cleared within 60 to 80 years, which means even the oldest estimates make it decades old, not centuries or millennia. VT 1137-0337 is a very young neutron star, and quite possibly as young as 14.

The radio energy from VT 1137-0337 is 10,000 times more powerful than that of the Crab Nebula, which was created by a supernova in 1054 A.D. This means it has a much more powerful magnetic field. So powerful that VT 1137-0337 could be in the process of becoming a magnetar. Magnetars are highly magnetic neutron stars that are likely the cause of fast radio bursts (FRBs).

So this could be the first observation of a magnetar being born, but it won’t be the last. As astronomers conduct future sky surveys, they will surely discover even more births of these powerful objects.

Note: The author works as a science writer for NRAO, which operates the VLA and VLASS, but was not involved in the research presented here.