The scientific and astronomical community are eagerly waiting for Tuesday, July 12th, to come around. On this day, the first images taken by NASA’s James Webb Space Telescope (JWST) will be released! According to a previous statement by the agency, these images will include the deepest views of the Universe ever taken and spectra obtained from an exoplanet atmosphere. In another statement issued yesterday, the images were so beautiful that they almost brought Thomas Zarbuchen – Associate Administrator for NASA’s Science Mission Directorate (SMD) – to tears!

The James Webb Space Telescope is the most powerful and complex observatory ever deployed, not to mention the most expensive ($10 billion)! Because of its complex system of mirrors and its advanced sun shield, the telescope had to be designed so that it could be folded up (origami style) to fit inside a payload fairing, then unfold once it reached space. To ensure everything would work, the telescope had to be rigorously tested, a process that caused several delays and cost overruns (a situation made worse by the COVID pandemic). 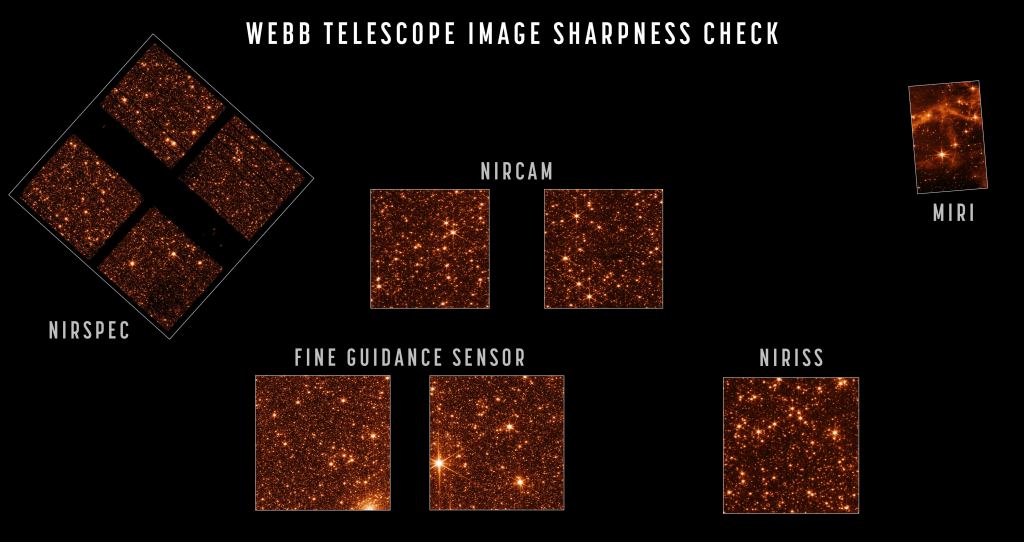 Engineering images of sharply focused stars in the field of view of each instrument demonstrate that the telescope is fully aligned and in focus. Credit: Credit: NASA/ESA/STScI

Since it launched on Christmas Day in 2021, the observatory has successfully unfolded, commissioned its science instruments, and reached the L2 Lagrange Point, where it will remain for its entire mission. It also successfully aligned all 18 of its segmented mirrors, which are arranged in a honeycomb configuration that measures 6.5 meters (more than 21 feet) in diameter – almost three times the size of Hubble’s primary mirror. Previously, NASA released test images the JWST took of a star 2,000 light-years from Earth in the direction of the constellation Ursa Major (HD 84406).

“The images are being taken right now. There is already some amazing science in the can, and some others are yet to be taken as we go forward. We are in the middle of getting the history-making data down. It’s really hard to not look at the Universe in a new light and not just have a moment that is deeply personal. It’s an emotional moment when you see nature suddenly releasing some of its secrets, and I would like you to imagine and look forward to that.”

During the news conference, NASA officials said that the images and other data would include the deepest-field image of the Universe ever taken. The previous record-holder was the image acquired as part of the Hubble Ultra Deep Field, which included 10,000 galaxies of various ages, colors, and distances in the direction of the constellation Fornax. The 100 oldest galaxies in the image (shown below) appear deep red and were dated to just 800 million years after the Big Bang, making them the most distant and oldest ever viewed. 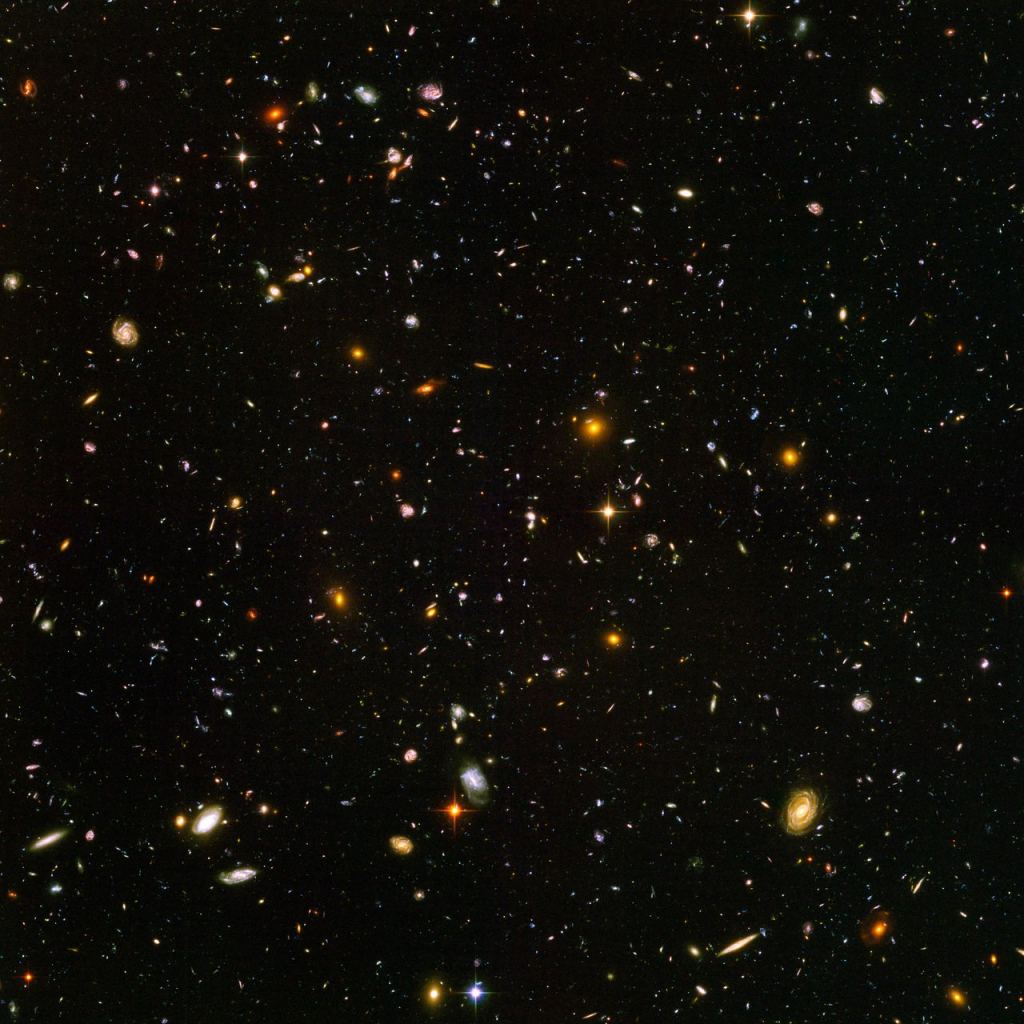 The James Webb images peer even further into the cosmos and reveal what galaxies looked like just a few hundred million years after the Big Bang. These earliest galaxies were instrumental in dispelling the “Cosmic Dark Ages,” a period where the Universe was permeated by neutral hydrogen atoms and therefore invisible to modern instruments. Astronomers know what the Universe looked like just prior to this period, thanks to the relic radiation from the Big Bang, which is visible to our instruments – the Cosmic Microwave Background (CMB).

As a result, astronomers have been unable to see what the earliest galaxies looked like since their formation coincides with the Dark Ages. But thanks to its advanced infrared imaging capabilities, James Webb can pierce the veil of “darkness” and see what galaxies initially looked like. This will allow scientists to model and simulate the evolution of cosmic structures with far greater accuracy, which could also provide fresh insight into the role of Dark Matter and Dark Energy in cosmic evolution.

Another image will provide the public with something else they’ve never seen before (which James Webb is ideally suited to provide). This image will feature an exoplanet, as well as spectral data from its atmosphere obtained by its advanced suite of spectrographs. These instruments allow astronomers to observe chemical signatures from an exoplanet by observing how light is absorbed (and at which wavelengths) in its atmosphere. These signatures will reveal the atmosphere’s composition, which could include oxygen gas, nitrogen, and carbon dioxide, the very things we associate with “habitability.”

Even more exciting, these same observations could reveal traces of methane gas, ammonia, and other chemicals indicative of biological processes that we associate with life (aka. “biosignatures”). Last, but not least, the presence of chemicals like chlorofluorocarbons and others we associate with industrial processes would be seen as indications of advanced life (aka. “technosignatures”). In short, images by James Webb will allow astronomers to model the evolution of the cosmos, place tighter constraints on which exoplanets are “habitable,” and could even reveal that humanity is not alone in the Universe.

There are many other things that James Webb will study during its primary science operations (which will last until 2028) and its ten-year mission (which is expected to be extended to 20 years). This will include the dust and gas that make up the interstellar medium (ISM), debris disks around young stars, planetary systems in the process of formation, cooler objects like M-type (red dwarf) stars and brown dwarfs, and the center of the Milky Way Galaxy.

And it all starts with these “first-light” images, which NASA says it plans to release on July 12th, starting at 10:30 AM EDT (08:30 AM PDT). According to NASA’s deputy administrator, Pam Melroy, these first images were emotionally overwhelming for her too. “What I have seen moved me, as a scientist, as an engineer, and as a human being,” she said. While the rest of us will have to wait another eight days, the teasers we’ve been treated to suggest that the years of delays, retesting, and cost overruns will totally be worth it!

You can check out the images by going to NASA’s JWST mission page. As of the publication of this article, there are just 8 days, 19 hours, and 12 minutes to go!

The post Astronomer Working With Webb Said the new Images “Almost Brought him to Tears.” We’ll see Them on July 12th appeared first on newsastronomy.com.