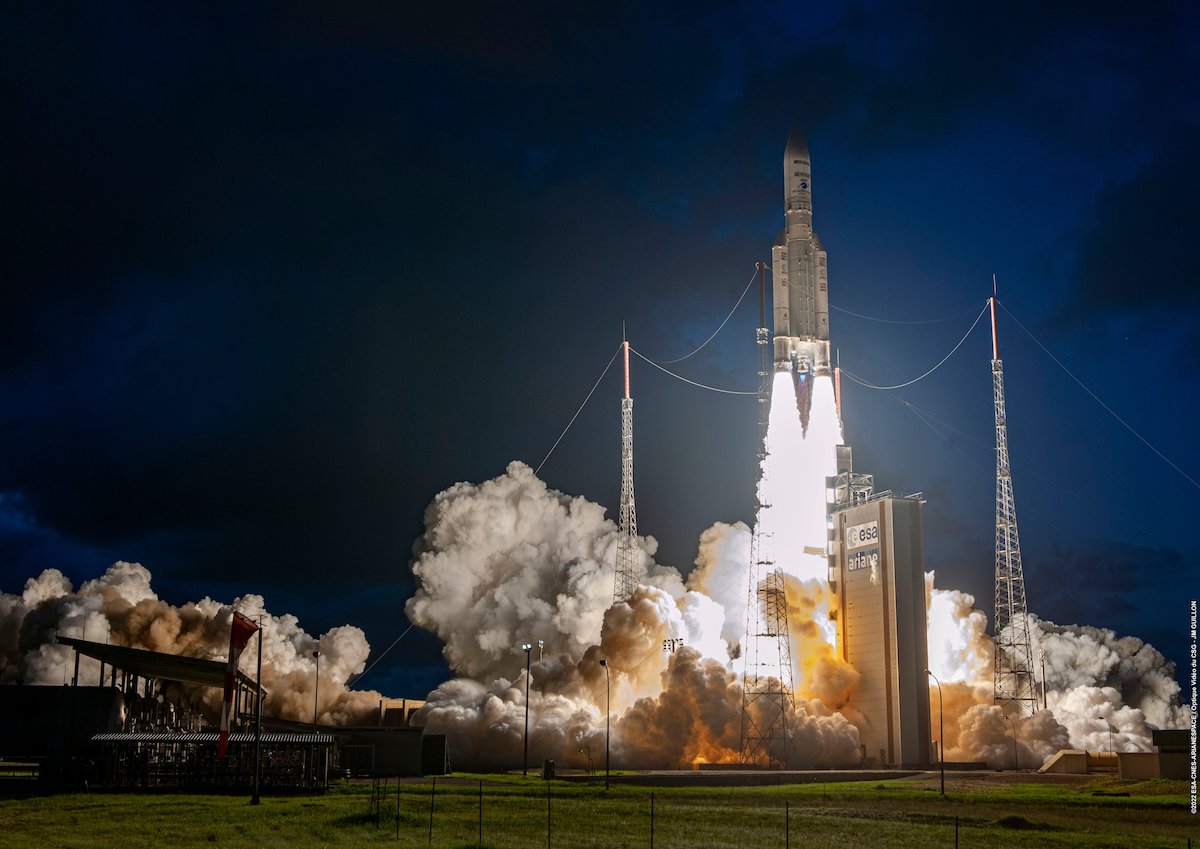 A European Ariane 5 rocket lifts off from the Guiana Space Center with the MEASAT 3d and GSAT 24 satellites. Credit: ESA/CNES/Arianespace/JM Guillon

With a roar from its hydrogen-fueled main engine and two solid rocket boosters, the heavy-lift rocket launched at 5:50 p.m. EDT (2150 GMT) Wednesday from the Guiana Space Center, a European-run spaceport on the northeastern coast of South America.

The Malaysian-owned MEASAT 3d satellite and Indian GSAT 24 spacecraft were on-board the mission, heading for high-altitude positions to beam television programming and broadband signals across Asia.

Liftoff occurred at 6:50 p.m. local time in French Guiana, where the Ariane 5 took off just after sunset. The launch was delayed 47 minutes to allow time for engineers to evaluate a technical concern discovered in the final stages of propellant loading in the countdown.

That problem cleared, and the countdown clock resumed at the seven-minute mark, culminating in ignition of the Ariane 5 rocket’s Vulcain 2 main engine. Seven seconds later, two powerful solid rocket boosters flashed to live with an orange glow, sending the 180-foot-tall (55-meter) rocket into a twilight sky.

Heading east from French Guiana, the Ariane 5 surpassed the speed of sound in less than a minute. The main engine and boosters generated 2.9 million pounds of thrust at full power, until the solid-fueled motors jettisoned more than two minutes into the flight.

The Ariane 5 then shed its Swiss-made payload fairing, or nose cone, after climbing into space. The core stage continued accelerating the rocket until nearly nine minutes after liftoff, then separated to fall into the Atlantic Ocean off the west coast of Africa.

Liftoff of an Ariane 5 rocket with the MEASAT 3d and GSAT 24 communications satellites, providing new television and broadband capacity over Malaysia and India. https://t.co/hKF9Zo6uyS pic.twitter.com/5PNKods7DU

An HM7B upper stage engine, fed by cryogenic liquid hydrogen and liquid oxygen like the core stage, ignited for a 16-minute burn to propel the MEASAT 3d and GSAT 24 satellites to a velocity of 20,800 mph, or 9.3 kilometers per second. With that velocity, the Ariane 5 launcher aimed to inject the payloads into an elliptical, or oval-shaped, geostationary transfer orbit ranging between 155 miles (250 kilometers) and 22,236 miles (35,786 kilometers) in altitude, with an inclination angle of 6 degrees to the equator.

Control teams in France and India established contact with MEASAT 3d and GSAT 24 soon after separation from the launcher, and Arianespace declared success for the 113th flight of an Ariane 5 rocket. It was the first Ariane 5 flight of the year, and the first since the historic launch of the James Webb Space Telescope on Christmas Day last year.

“After the successful launch of the James Webb Space Telescope, this new achievement helps Ariane 5 write a new chapter in space history,”  said André-Hubert Roussel, CEO of ArianeGroup, the industrial consortium that develops and manufactures the Ariane rocket family. “Ariane 5 demonstrates its reliability once again, justifying the trust of Arianespace’s customers worldwide. Its successes are tied to Ariane 6, which benefits from the same reliability along with increased competitiveness and versatility.”

After the launch Wednesday, there are four Ariane 5 rockets left to fly before retirement. The next-generation Ariane 6 rocket, designed to be less expensive to build and operate, will replace the Ariane 5 rocket.

The European Space Agency announced earlier this month that the first Ariane 6 flight has been delayed until some time in 2023. The final Ariane 5 launch is currently scheduled for the second quarter of 2023, officials said. 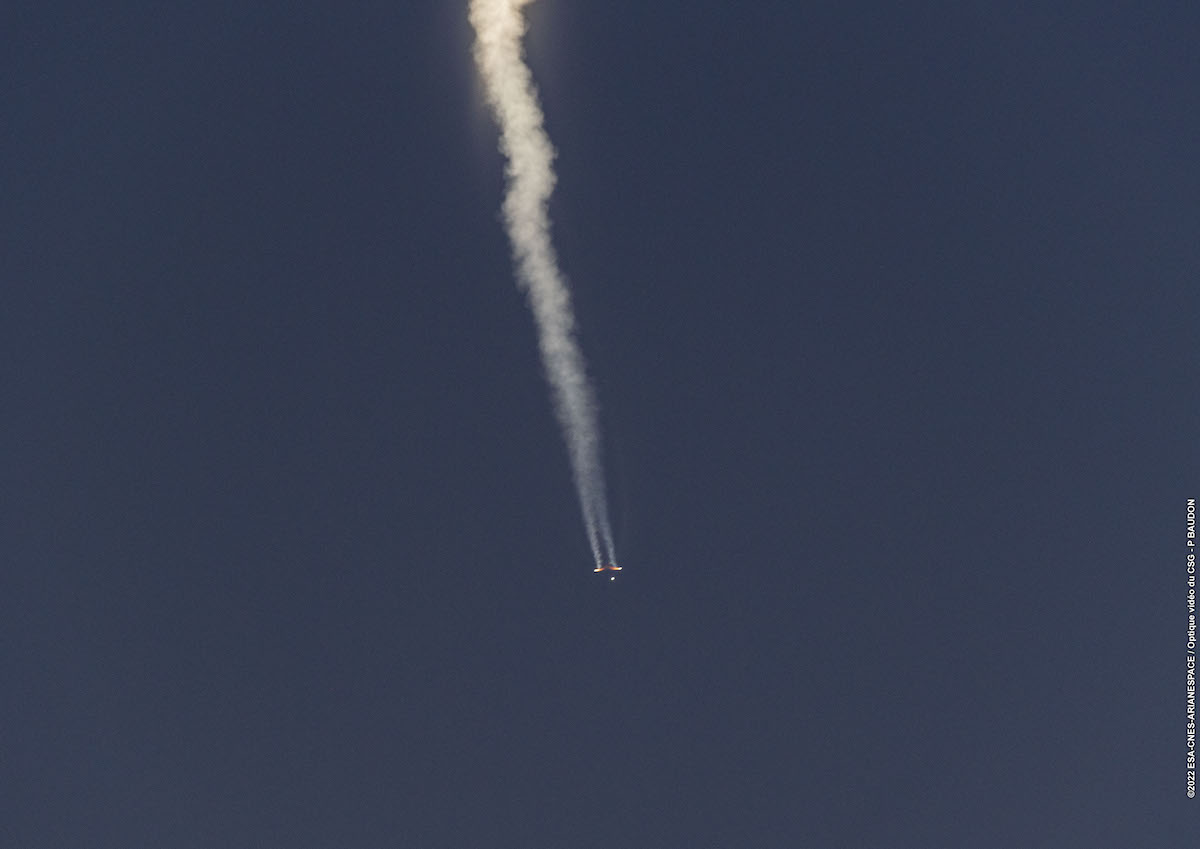 The MEASAT 3d and GSAT 24 satellites will use on-board thrusters to circularize their orbits at geostationary altitude more than 22,000 miles over the equator, where their speeds will match the rate of Earth’s rotation.

MEASAT 3d and GSAT 24 arrived in May at the Guiana Space Center from their factories in France and India . Teams fueled the satellites with maneuvering propellants before positioning them on top of the Ariane 5 launcher.

MEASAT 3d, built in Europe by Airbus, is beginning a mission designed to last at least 18 years for the Malaysian telecom company MEASAT. The new spacecraft will be co-located with two other MEASAT satellites at 91.5 degrees east longitude.

The $272 million (1.2 billion Malaysian ringgit) satellite is based on Airbus’s Eurostar 3000 spacecraft bus.

“With the addition of this satellite, Malaysians will be able to enjoy better connectivity, especially in remote areas,” said Dato’ Sri Haji Mohammad bin Mentek, secretary general of the Malaysian ministry of communications and multimedia. 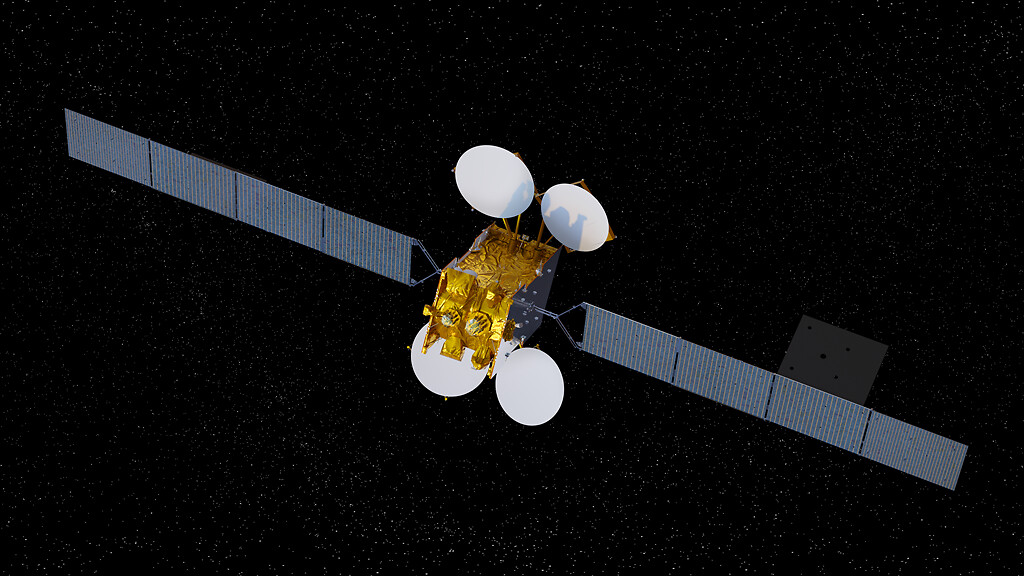 “We are committed to driving Malaysia’s national communications vision forward,” said Yau Chyong Lim, MEASAT’s chief operating officer. “With MEASAT 3d, we will be better positioned to support the government’s target to achieve 100% internet access by 2025, by filling the broadband gap in locations without 4G, 5G or fiber coverage.”

The spacecraft rode in the lower position on the Ariane 5’s dual-payload stack, and is heading for an operating position in geostationary orbit at 83 degrees longitude. GSAT 24 was built by the Indian Space Research Organization, India’s space agency. The satellite is owned and operated by NewSpace India Limited, or NSIL, the commercial arm of ISRO.

NSIL has leased TV broadcast capacity on GSAT 24 to M/s Tata Play, a direct-to-home television provider that says it offers more than 600 channels to more than 23 million users across India.

“NewSpace India Limited is extremely excited to see our first demand-driven communications satellite, built by Indian Space Research Organization, built and successfully launched,” said Radhakrishnan Durairaj, chairman and managing director of NSIL. “I would like to also congratulate and thank Arianespace for giving us such a beautiful orbit.”

“GSAT 24, the launch we saw just now, is one of the main missions that we plan to undertake in the coming years,” Durairaj said. “We have a couple of communications satellites that need to be launched in the next one or two years, so we are eagerly looking forward to build our assets in space and provide all the communication needs of the country.”