What does the ancient coin found recently off the shores of Israel depict?

You never know what discoveries are waiting to be found in old records or artwork. A recent archaeological find sent us down just such an astronomical rabbit-hole, leading us to ideas that are fun and interesting to consider.

It all started with the recent amazing discovery of the ancient Roman coin off the coast of Haifa, Israel in the Mediterranean Sea. The bronze coin depicts the zodiac sign of Cancer, along with the Moon goddess Selene and crescent Moon. The ancient coin would have been part of a set of twelve, depicting the houses of the zodiac. The coin was recovered by the Israel Antiquities Authority’s Maritime Archaeology Unit.

“This is the first time such a coin has been discovered off Israel’s coast,” says Director of the Maritime Archaeology Unit Jacob Sharvit in a recent press release. “It (the coin) is a rare addition to the National Treasures collection.”

The ancient coin was found as part of a horde from a presumed ancient shipwreck. From the inscription on the obverse, researchers know that the coin was minted in Alexandria, Egypt during year eight of the reign of Roman emperor Antonius Pius, which would translate to 144-145 CE.

Now, I noticed something intriguing on the image, and did some brief research.

The ancient coin also shows a bright ‘star’ near the Moon. I began to wonder if this depicted a real astronomical event, visible from the Mediterranean region in the years before the coin was minted. Now, no bright star exists in Cancer; I therefore suspected it was actually a bright planet, say, Jupiter or Venus. I did a search using the Occult 4.2 program and the planetarium program Stellarium (which takes in to account the ~26,000 year precession of the equinoxes and stellar proper motion over the centuries), and found one event that was especially intriguing: the dusk conjunction of the waxing crescent Moon and Jupiter on the evening of June 4th 140 CE… in the sign of Cancer. 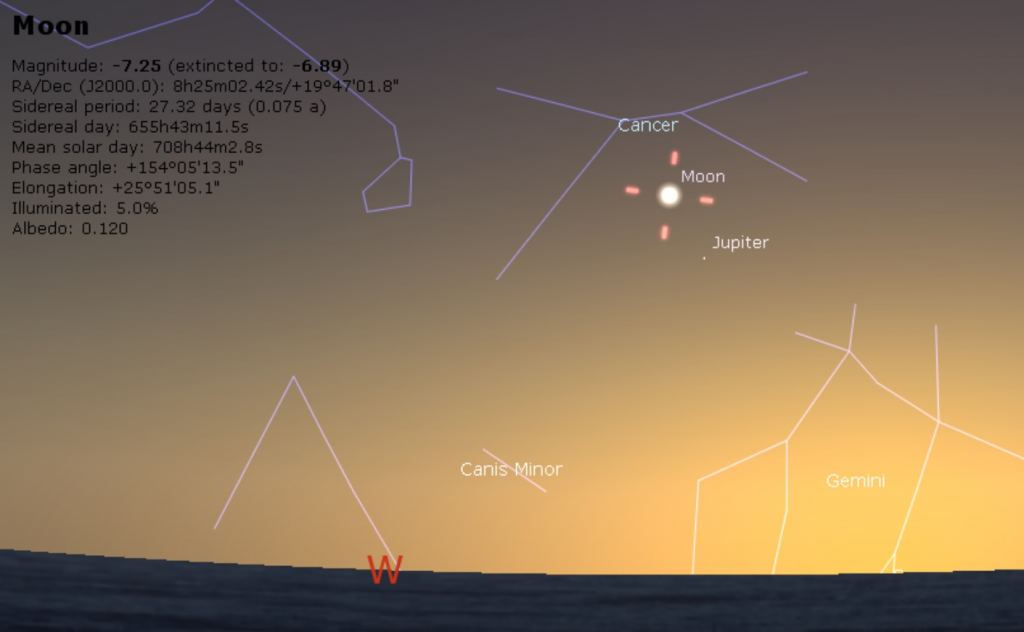 Dusk looking west from the Mediterranean region on the evening of June 4th, 140 CE. Credit: Stellarium

Not only did this occur in the reign of Antoninus Pius, but it would have been visible right before the death of his beloved wife Faustina the Elder in late 140 CE… perhaps the ancient coin commemorates her passing? Certainly there’s record of Pius’s devotion to Faustina, and his subsequent campaign to deify Faustina after her death. 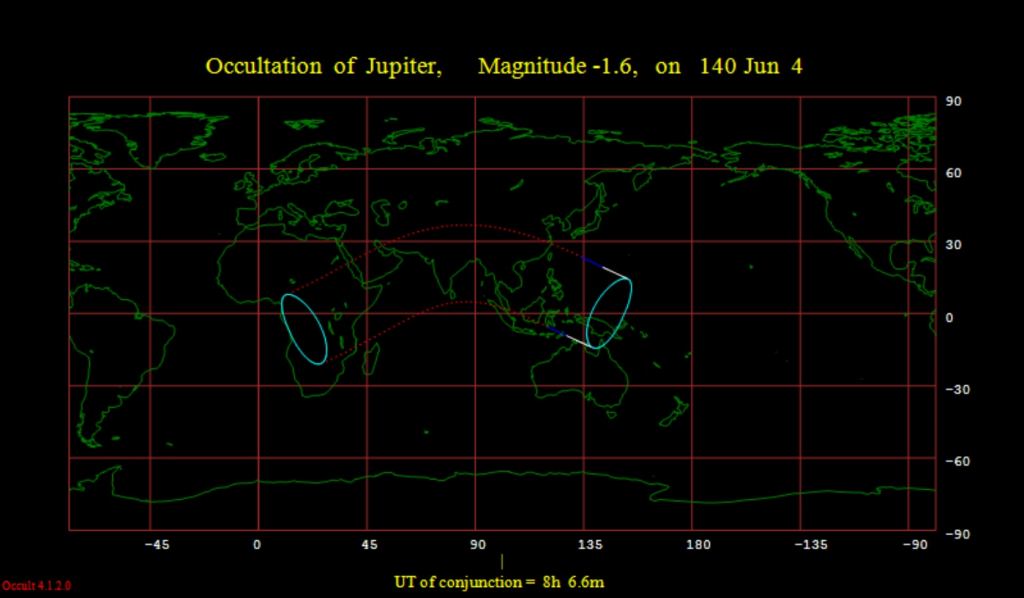 Of course, the modern science of astronomy has its hoary roots in the archaic practice of astrology. Ancients watched the sky, noted what they saw and assigned import to them versus human and terrestrial affairs. We all remember the astrologer’s admonition to Julius Caesar to ‘beware the Ides of March,’ and astronomical historians from Kepler and Newton onward have gone broke trying to link the ‘star’ that guided astrologers to Bethlehem with a true astronomical phenomenon.

Under one possible scenario, a court astrologer could have assigned significance to the conjunction of Jupiter with the Moon in Cancer, a portent that later moved a grieving Pius to commemorate the death of his wife, casting her as the Moon goddess Selene. 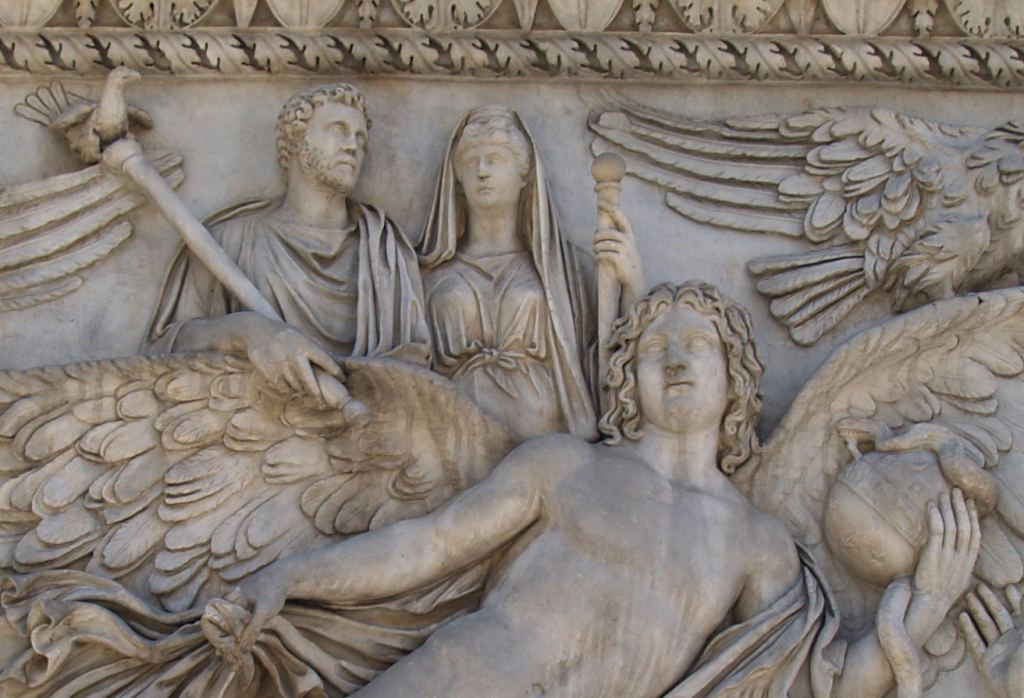 The base of the column of Antoninus Pius in Rome, depicting Pius and Faustina. Credit: Saiko/Wikimedia Commons 3.0 license.

I ran this idea past fellow amateur astronomer John Flannery, and he had some interesting ideas. He noted that while it’s tempting to assert that the dots on the shell of the Crab depict the open cluster Praesepe (Messier 44), Steve O’Meara also notes in a past Sky & Telescope column that individual stars in the cluster would be hard to discern with the naked eye.

Flannery also pointed me toward another interesting possibility for the mystery star: the 141 CE apparition of Halley’s comet. I ran a simulation using data from NASA/JPL/Horizons, and 1P/Halley would have been at Right Ascension 9 hours, 13’ 12’, Declination +24º 10’ on April 28th, 141 CE in the adjacent constellation of Leo the Lion shinning at +1st magnitude while the Moon was in Cancer at dusk. 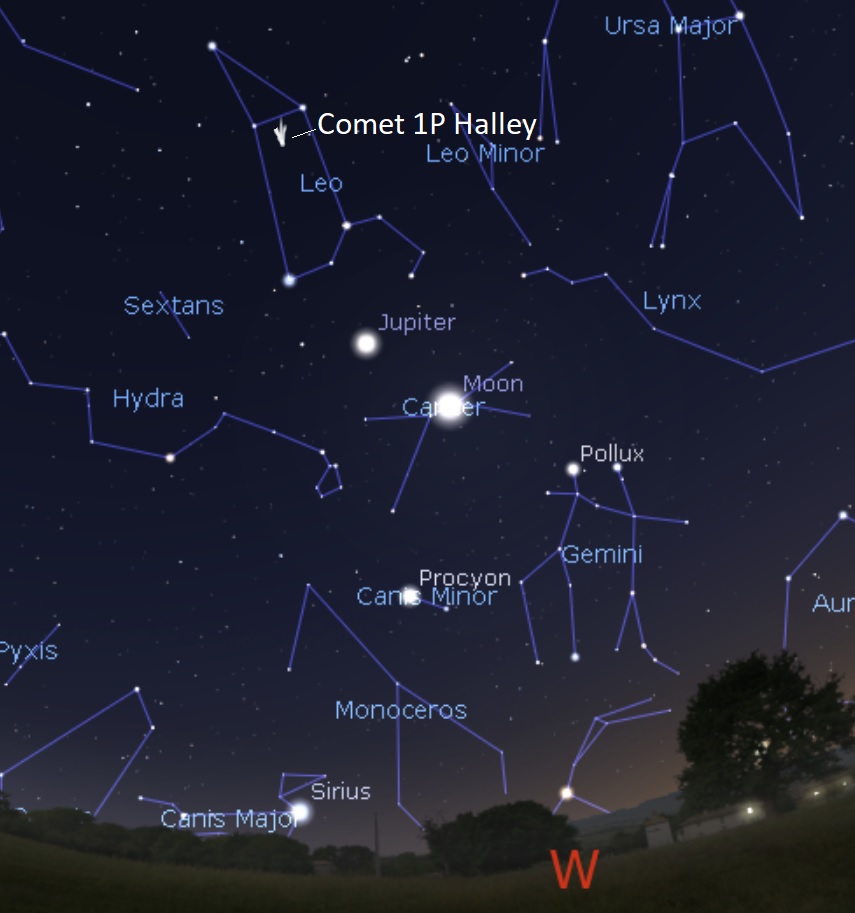 “In astrology, the Moon rules the sign of Cancer,” says Flannery. “Regardless of what the coins depict, I think it is an extraordinarily beautiful set (referring to the twelve coin zodiac set) and shows delicate workmanship.”

We may never know for sure. What could prove or refute the assertion is the discovery of earlier (pre-second century) coins, with the same Moon-star Moon goddess inscription.

Beyond just being a fun astronomical mystery, such depictions of astronomical events in art, text or ancient coins are important in pinpointing dates and events in the past. For example, one recent ancient Chinese text may have chronicled the earliest depiction of aurora, and another text may note a sunset annular eclipse alluded to in the Book of Joshua.

In any event, this is all speculative, but it’s fun to consider. In regards to astrology, Shakespeare said it best: “The fault… is not in our stars, but in ourselves.” 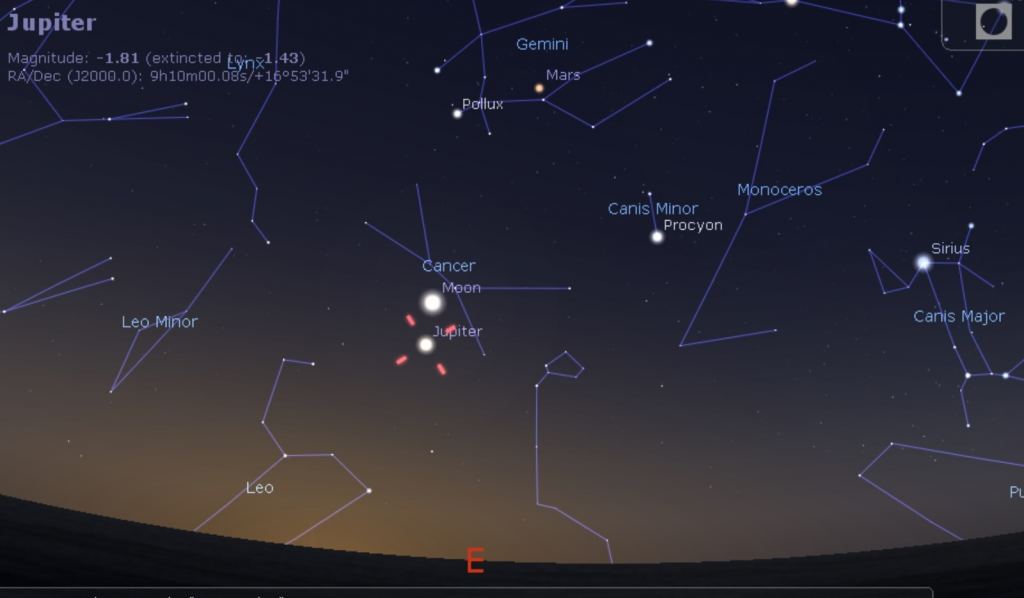 In the meantime, you can enjoy another such tryst of the crescent Moon, Jupiter in Cancer at dawn on the morning of September 8th, 2026, followed by a fine occultation of the king of the planets for North America on the next lunar cycle on October 6th, 2026. Be sure to watch if skies are clear as the celestial drama unfolds in the dawn, and wonder just what folks might have seen in the sky, nearly two millennia ago. 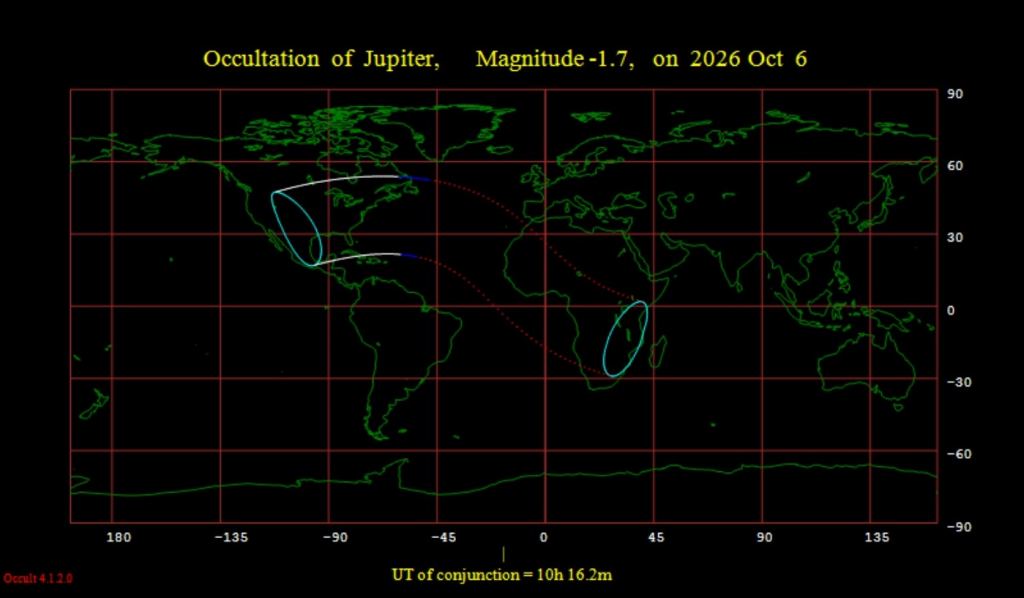 The post Ancient Coin Discovery With An Astronomical Mystery appeared first on newsastronomy.com.