When it comes to astronomy, the more instruments watching the sky, the better. Which is why it has been so frustrating that the world’s rising superpower – China – has long lacked focus on space-science missions. In recent years, with some notable exceptions, China’s space agency has focused on lunar exploration and human spaceflight, as well as some remote monitoring capabilities, leaving the technical know-how of arguably the world’s second more capable country on the sidelines when it comes to collecting space science data. Now, a team led by Jian Ge of the Shanghai Astronomical Observatory has suggested the most ambitious Chinese-led space science mission to date. And it plans to search for one of the holy grails of current astronomy research – an exoplanet like Earth.

Most likely, such a planet does exist, but in the relatively nascent field of exoplanet research, no one has yet been able to find it. That is not for lack of trying. Kepler spent nine years searching over 150,000 stars, and while it detected almost 3,000 new exoplanets, none met the criteria of being Earth-sized in the habitable zone of a sun-like star. Bad luck might have played a role – the new paper’s authors even calculated that statistically, Kepler probably should have found at least one Earth-sized planet in a habitable zone.

What’s more impressive is that the calculate their own system will likely find at least 17. That is, if the current theoretical frequency of Earth-like planets holds up. The project, known as Earth 2.0 Telescope, or ET for short, will do its best to capture as many planets as possible from its strategic point at the L2 Lagrange point, right beside the recently commissioned James Webb Space Telescope.

UT video on the search for Earth 2.0

One reason an Earth 2.0 has been elusive so far is its longer orbital periods. Kepler suffered a mechanical failure in two reaction wheels relatively early in its operational lifetime, limiting its usefulness for long-term observations. Given Earth’s own year-long orbital period, there is a high likelihood that Earth analogs will have similarly long orbital periods.

ET will have a significant advantage there, scanning 500 square degrees out of the night sky’s total 41,000 square degrees. That may seem like a small percentage, but it’s significantly better than Kepler’s 115 square degrees field of view and more likely enough to capture data on 1.2 million dwarf stars for four years. But importantly, ET will be viewing the same patch of sky as Kepler, allowing it to confirm the work of its hobbled predecessor.

According to Dr. Ge Jian, the lead author of the white paper, the search for Earth 2.0 is all based on statistics. The more stars a mission can observe, and the longer they can observe them, the more likely they will find that first Earth analog. To that end, Ge expects ET to find over 30,000 new exoplanets, with 5,000 of them being rocky ones around the size of Earth.

Finding Earth 2.0 is a popular topic here at UT.

Detecting all those new planets would be the work of six identical, separate telescopes that will use an advanced type of CMOS detector in space for the first time. Each telescope will have four 9K x 9K CMOS detectors and capture light from the same region of space, creating a very low noise floor to work from when identifying exoplanets. Those detectors will be focused on the transit photometry method, which is the same used to detect more than 75% of all exoplanets so far.

But transiting exoplanets aren’t the only thing ET will look for. A seventh telescope will hunt for another elusive astronomical target – rogue planets. Instead of photometry, which wouldn’t really work as rogue planets don’t orbit a star, this seventh telescope will use an extremely precise form of microlensing, another common exoplanet hunting technique. In this case, the rogue exoplanet would warp the light coming off a star, and ET should be able to detect that small change.

To be more precise, ET itself won’t be able to confidently say whether it has found an Earth twin entirely by itself – it will need confirmation from other ground-based telescopes and maybe even support from some that aren’t even invented yet, but might one day be able to monitor an exoplanet’s atmosphere. Venus and Mars are technically in the habitable zone of the Sun, but neither of those planets would be considered an Earth analog. 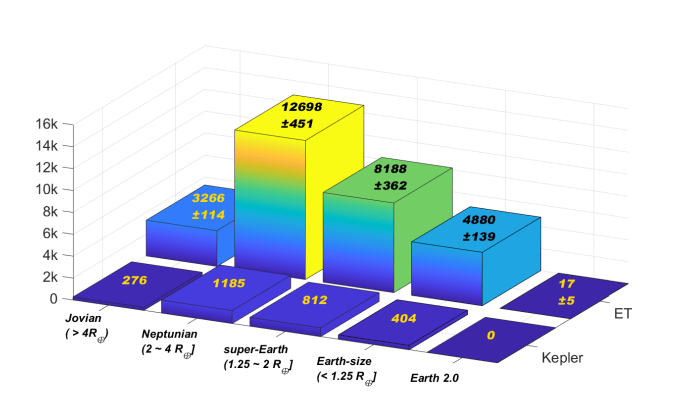 Image depicting the numbers of exoplanets found by Kepler and the potential numbers that ET could find.
Credit – Ge et al.

In short, there is still much science to be done, but those goals could become one step closer if the Chinese Academy of Sciences funds the project. They are expected to decide soon, and they will need to if the project is to meet its ambitious target of launching in 2026. Four years might seem like a very short time to develop such an ambitious astronomy project, but for avid exoplanet hunters, that time can’t come soon enough.

Learn More:
Ge et al – An Ambitious Plan to Find Earth 2.0
Vice – China Reveals Massive Project to Find ‘Earth 2.0’
Space.com – China is on the hunt for ‘Earth 2.0’ with proposed space telescope
UT – If We’re Searching for Earth 2.0, Would We Know It When We Find It?

Lead Image:
Artist’s depiction of all of the Earth-sized planets found in their star’s habitable zones so far.
Credit – Ge et al.

The post An Ambitious Plan to Find Earth 2.0 appeared first on newsastronomy.com.