Since 2012, NASA’s Curiosity rover has been exploring the Gale Crater for clues about Mars’ past and possible evidence that it once supported life. For the past year, this search has centered on the lower levels of Mount Sharp, a transitional zone between a clay-rich region and one filled with sulfates (a type of mineral salt). These regions can offer insight into Mars’ warm, watery past, but the transition zone between them is also of scientific value. In short, the study of this region may provide a record of the major climatic shift that took place billions of years ago on Mars.

For example, this region has unique geological features that include clay minerals that appear as flaky layers of sedimentary rock. One in particular, “The Prow,” was recently imaged by Curiosity and had the mission science teams buzzing. These features formed when water still flowed into the Gale Crater, depositing sediment at the base of Mount Sharp. Higher on the mountain, the hill was likely covered in wind-swept dunes that hardened into rock over time. In between them is where the flaky layers formed, possibly as a result of small ponds or streams that wove them among the dunes.

As the rover climbs higher on Mount Sharp and through the transition zone, it is detecting fewer clay deposits and more sulfate-rich rock. Soon, the rover will drill its last sample from this zone and analyze it to learn more about the changing mineral composition of these rocks. The analysis of this region is also expected to provide insight into how groundwater ebbed and flowered over time, leaving behind a complex geological record that indicates how the region experienced multiple “wet” periods before becoming the frozen and dedicated place it is today.

“We no longer see the lake deposits that we saw for years lower on Mount Sharp. Instead, we see lots of evidence of drier climates, like dry dunes that occasionally had streams running around them. That’s a big change from the lakes that persisted for perhaps millions of years before.”

In other rover-related news, Curiosity has been experiencing some health scares that indicate that the rover is showing signs of age. These include additional damage to its treads, plus an apparent instrument issue that caused the rover to go into safe mode. On June 4th, the engineering team took new pictures of Curiosity’s wheels, something they have been doing every 1000 meters (3,281 feet) to check on their overall health. This has become especially important since the rover team spotted the first breaks in its treads back in 2017. Originally, the team conducted wheel inspections every 500 meters (1,640 feet).

This was doubled after a traction control algorithm was introduced to slow wheel degradation, which was seen as a justification for fewer inspections. However, the latest pictures of Curiosity’s wheels revealed that the left middle wheel had damaged one of its characteristic zig-zagging treads (grousers) – four of this wheel’s nineteen grousers had already broken, making this the fifth. This has prompted mission controllers to return to their original cadence and take images of the wheels every half-kilometer (0.62 miles). Said Megan Lin, Curiosity‘s project manager at JPL:

“We have proven through ground testing that we can safely drive on the wheel rims if necessary. If we ever reached the point that a single wheel had broken a majority of its grousers, we could do a controlled break to shed the pieces that are left. Due to recent trends, it seems unlikely that we would need to take such action. The wheels are holding up well, providing the traction we need to continue our climb.” 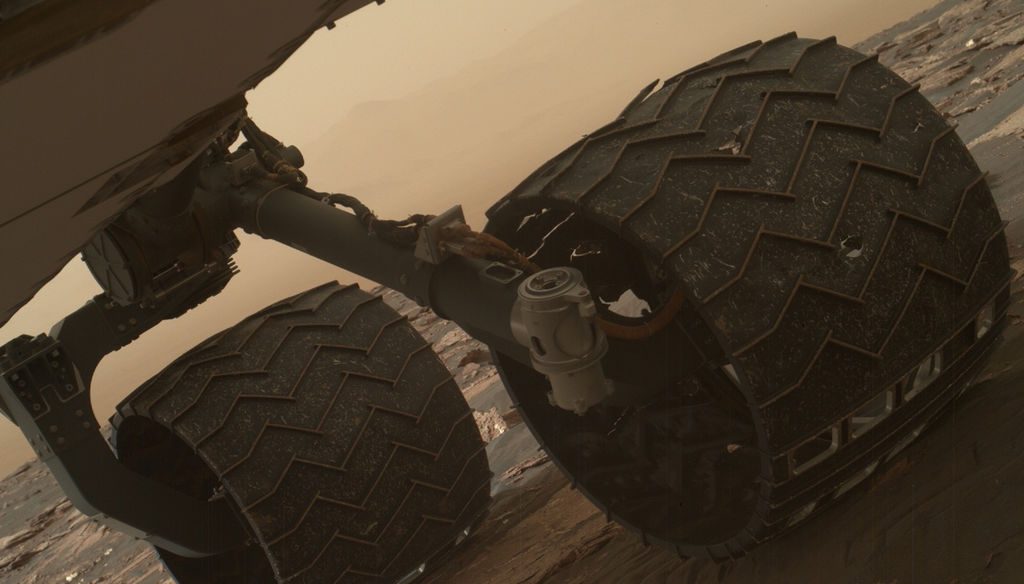 The other issue occurred on June 7th when Curiosity‘s internal temperature sensors indicated that one of its instrument control boxes had become overheated. This caused the rover to automatically enter safe mode and shut down everything but its most essential functions. The mission engineers at NASA’s Jet Propulsion Laboratory returned the rover to normal operations two days later but are still trying to determine the exact cause of the issue. They have suggested that this may have resulted from a faulty temperature reading and have since switched to backup temperature sensors.

These indications of wear, tear, and possible malfunctions are not putting a damper on Curiosity’s tenth anniversary, which will occur on August 5th. With its mission extended indefinitely, it has no set timeline for its operations and will keep exploring until its radioisotope thermoelectric generator (RTG) dies or it suffers a catastrophic failure. In the meantime, Curiosity continues to soldier on and scale Mount Sharp, gathering evidence of Mars’ past and looking for potential signs that it once supported life (and maybe still could!)

The post Amazing Flaky Martian Rocks Were Formed in a Stream or a Small Pond appeared first on newsastronomy.com.