Artist’s illustration of the Psyche spacecraft at its destination. Credit: NASA/JPL-Caltech

Mission officials said the next opportunity to launch the mission to explore Psyche, a metal-rich asteroid, is in July 2023. An independent review panel will evaluate the next steps for the project before NASA leadership decides when, or if, the Psyche mission should continue toward launch.

After “herculean” efforts to overcome the software testing problem, NASA concluded last week that the Psyche mission will not be able to launch with acceptable risk levels during a launch period between Sept. 20 and Oct. 11, said Lori Glaze, director of NASA’s planetary science division.

Glaze said it was an “incredibly tough decision” to ground the mission, particularly when the Psyche spacecraft is finished and already delivered to the Kennedy Space Center for final launch preparations.

“We had a tight launch period, and we have run out of time for the 2022 launch opportunity,” said Laurie Leshin, director of NASA’s Jet Propulsion Laboratory in Pasadena, California, which manages the Psyche mission.

The software for the Psyche spacecraft’s guidance, navigation, and control system was completed several months late, then engineers ran into problems configuring testbed simulators at JPL to verify all the software functions are ready for launch.

“The software for that system really needs to be thoroughly tested to ensure that the spacecraft can successfully reach Psyche,” Leshin said Friday. “The software has been delivered, but the issue is the time needed to complete testing and verification of the software.”

An independent team of experts from government, academia, and industry will present options to NASA for a path forward for Psyche, including cost assessments. NASA managers will review the findings and decide whether to continue the mission and target a new launch period, or cancel the project.

The Psyche mission is estimated to cost $985 million, including expenses for the launch on a SpaceX Falcon Heavy rocket and operating costs for the cruise to Psyche. NASA said Friday it has spent $717 million on the Psyche mission to date.

NASA rarely cancels missions because of delays, but the agency has terminated projects with ballooning costs. Psyche is part of the Discovery program, a line of planetary science missions that come with cost caps.

During the review, Glaze said the NASA will evaluate the cost of the Psyche delay and possible financial impacts to other planetary science missions in development. The continuation or termination review is part of NASA’s “standard practice” when a mission has a delay or a significant cost increase, Glaze said.

NASA said in May that the software testing problems would prevent the Psyche mission from taking off at the beginning of its launch period in August, pushing back the liftoff until late September. If Psyche was able to launch this year, the mission would have reached its asteroid destination in early 2026, with the help of a gravity assist maneuver at Mars to slingshot the spacecraft into the asteroid belt.

Lindy Elkins-Tanton, Psyche’s principal investigator at Arizona State University, said the next possible launch periods to reach asteroid Psyche could have the mission departing Earth in July 2023 or September 2023. There are additional launch periods available in 2024.

The Psyche mission can only launch from Earth when there is good alignment between the orbits of the planets and the asteroid target, enabling the spacecraft to make the journey through the solar system.

The launch opportunities in 2023 and 2024 would allow the spacecraft to reach Psyche in 2029 or 2030, three-to-four years later than planned. Analysts are still working on the trajectory the Psyche spacecraft could take to reach the asteroid belt between the orbits of Mars and Jupiter. Aside from the planetary alignment, mission planners also want the spacecraft to arrive at the asteroid when the Psyche’s equatorial regions are well-illuminated by the sun.

“We’re so excited for this to happen, we certainly hope and trust we’ll still have our chance,” Elkins-Tanton said. “That’s what the trajectory team is doing right now, making sure that we can find these times when we arrive when the lighting is good, and I will say that we do have some very good indications that there are some excellent opportunities in 2023.”

The Psyche spacecraft was delivered to the Kennedy Space Center in Florida from JPL on April 29 for final launch processing.

“This team has worked extremely hard to overcome many challenges, but we just ran out of time on this one,” Elkins-Tanton said. “The spacecraft hardware is largely complete, and we were on track to support the 2022 launch. We have no inherent deficiencies in the design or the ability of the spacecraft to accomplish the planned mission.

“And in fact, we have no known problems with the GN&C (guidance, navigation, and control) software,” she said. “We just haven’t been able to test it. So we have today a beautiful functional spacecraft built and ready, but there is that one challenge we couldn’t overcome and launch in 2022 with confidence.” 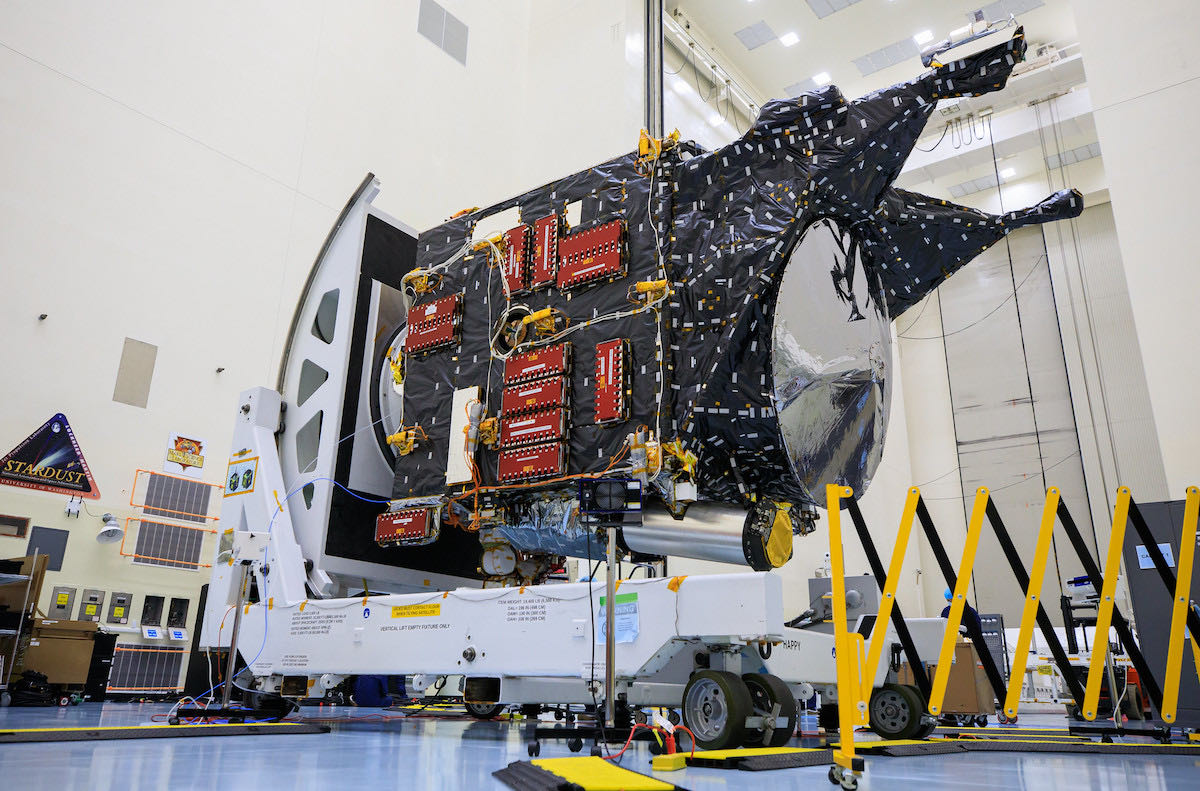 The guidance, navigation, and control software is responsible for managing the orientation of the spacecraft, pointing thee spacecraft’s antenna toward Earth, and providing trajectory data for the craft’s solar electric propulsion system. The solar electric thrusters need to start firing about 70 days after launch, leaving little time even if officials decided to launch the mission and then finish software testing.

“We just had insufficient time to verify and validate functionality associated with the GN&C software and for fault protection, and to fix any issues that we would then find during that testing,” Elkins-Tanton said. “These are critical path items.”

Psyche, the asteroid, has an irregular shape, an average diameter of about 140 miles (226 kilometers), and is made mostly of nickel and iron metals. The NASA mission will be the first spacecraft to explore a metal-rich asteroid, which may be the leftover core of a protoplanet that began forming in the early solar system more than 4 billion years ago.

NASA selected Psyche as a Discovery-class, cost-capped interplanetary mission in 2017, alongside the Lucy asteroid explorer, which launched last year.

NASA officials said the challenge with the software testbed for Psyche involved the unique blend of Maxar and JPL components on the mission.

The software simulator is located on the JPL campus in Southern California, and is designed to replicate functions of the Psyche spacecraft. Engineers needed to merge components from JPL and Maxar to fully test the software for the Psyche mission.

One of the problems with the software testbed involved time synchronization, preventing the software code from running smoothly, said Henry Stone, Psyche’s project manager at JPL.

Combining elements from JPL and Maxar posed “some interesting interface challenges,” Stone said. “I think the investigation going forward will help to determine if we made any fundamental misses on things in there.”

Two small spacecraft were assigned to hitch a ride to space with Psyche. NASA’s twin Janus probes, each weighing just 80 pounds (36 kilograms), will launch on the same Falcon Heavy rocket as Psyche, but will head off into the solar system to fly by separate asteroids.

With the earlier delay in Psyche’s launch from August to September, the Janus rideshare mission would have not been able to reach their original target asteroids. Glaze said the Janus team identified additional candidate asteroids to study if the mission had launched in the September-October period.

NASA will decide on a future for the Janus mission after completing the review of the next steps for Psyche. It could remain with the Psyche launch, but NASA could decide to assign Janus to a different launch. The agency has recently shifted rideshare launch assignments for other small science missions.

“I feel like we will be able to find a way, whenever we launch Janus, to reach some interesting science targets,” Glaze said. “We want to understand what’s happening with Psyche before we make any decision about what’s going to happen with Janus.”