ESA and NASA dusted off some old data from four retired space telescopes and combined forces to reveal new images of the four galaxies that our closest to our own Milky Way galaxy. One thing is common among the four new images: they are full of dust!

The retired observatories involved include ESA’s Herschel Space Observatory (which operated from 2009 to 2013), and the Planck observatory (also 2009-2013), along with two retired NASA missions, the Infrared Astronomical Satellite (IRAS) (which operated for 10 months in 1983) and the Cosmic Background Explorer (COBE) (1989-1993.).

Different wavelengths of light reveal different natural phenomena, and depending on the wavelength of observations, infrared telescopes can either easily detect clouds of dust and gas (at long infrared wavelengths) or observations at short infrared can peer through the gas and dust to see to see stars embedded in the dust.

The team started with unreleased images from Herschel. And while Herschel observations revealed much about the dust in our Universe, limits in the telescope’s design meant it missed up to 30% of all the infrared light that reveals the dust on our Universe. To help fill in those gaps, researchers combined their observations with data from the three other retired missions, supplemented with additional data from several different radio telescopes.

“These improved Herschel images show us that the dust ‘ecosystems’ in these galaxies are very dynamic,” said Christopher Clark, an astronomer at the Space Science Telescope Institute in Baltimore, Maryland, who led the work to create the new images.

Astronomers have learned that dust is created by dying stars and is one of the materials that forms new stars.

“The dust clouds observed by space telescopes are constantly shaped and molded by exploding stars, stellar winds, and the effects of gravity,” NASA and ESA explained in a press release on the images. “Almost half of all the starlight in the universe is absorbed by dust. Many of the heavy chemical elements essential to forming planets like Earth are locked up in dust grains in interstellar space. Understanding dust is an essential part of understanding our universe.

The images show the Andromeda galaxy, also known as M31; the Triangulum galaxy, or M33; and the Large and Small Magellanic Clouds – dwarf galaxies orbiting the Milky Way that do not have the spiral structure of the Andromeda and Triangulum galaxies. All four are within 3 million light-years of Earth. 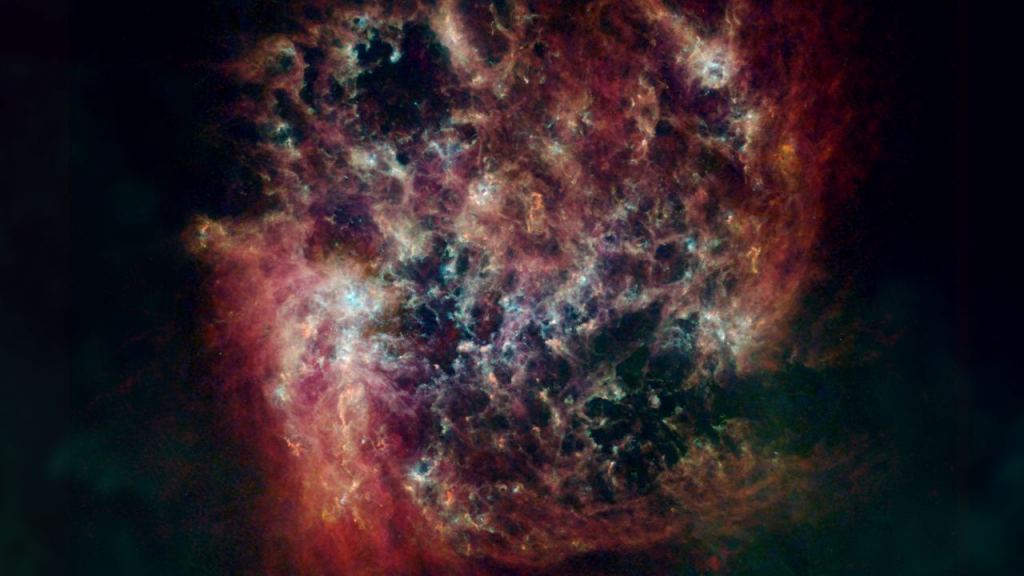 The Large Magellanic Cloud, as seen by the Herschel Space Telescope, Planck, COBE and IRAS. Credit: ESA and NASA.

The first image is of the Large Magellanic Cloud. It shows a red tail coming off the bottom left of the galaxy that was likely created when it collided with the Small Magellanic Cloud about 100 million years ago. The areas of red indicate hydrogen, the most common element in the Universe. Where cocoons of empty space are indicates regions where stars have recently formed, because intense winds from the newborn stars blow away the surrounding dust and gas. The green light around the edges of those bubbles indicates the presence of cold dust that has piled up as a result of those winds. Warmer dust, shown in blue, indicates where stars are forming or other processes have heated the dust. 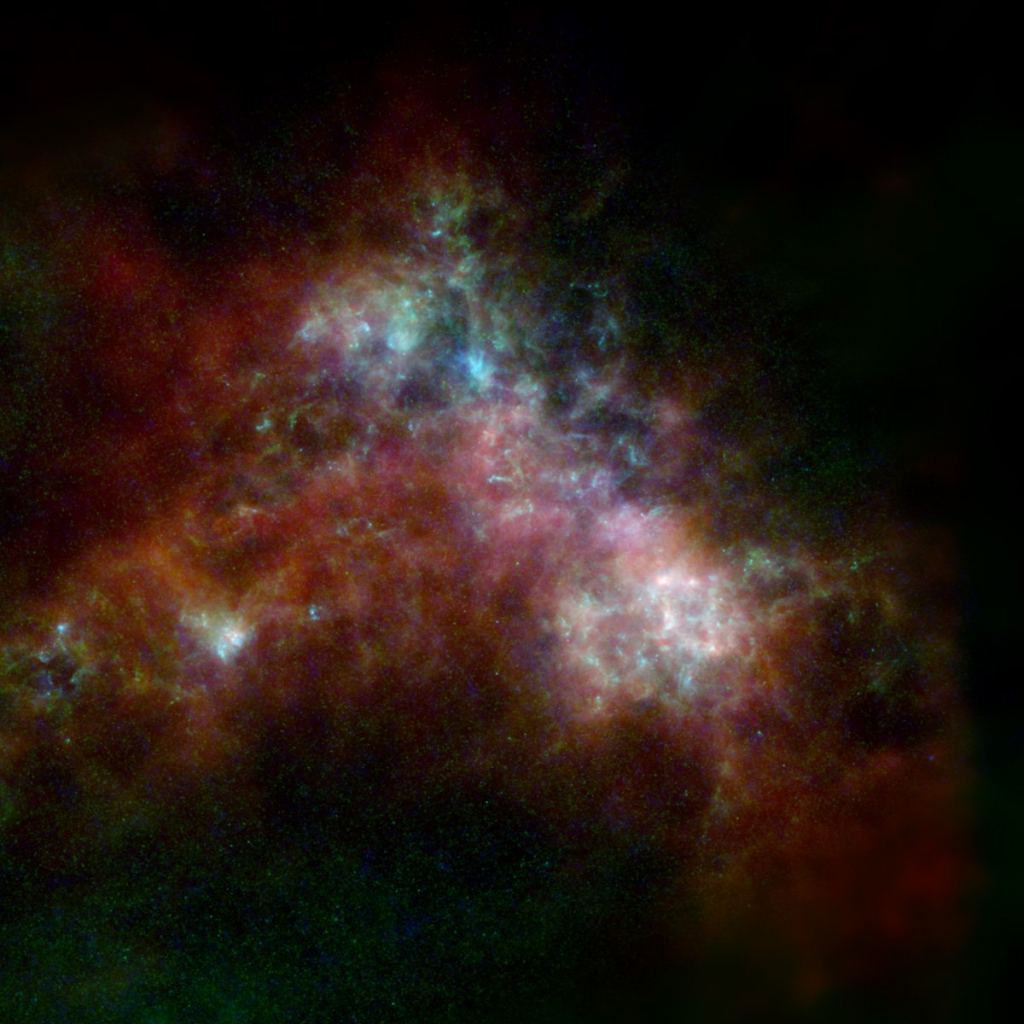 The Small Magellanic Cloud is a satellite of the Milky Way, containing about 3 billion stars. This far-infrared and radio view of it shows the cool (green) and warm (blue) dust, as well as the hydrogen gas (red). Credit: ESA/NASA/JPL-Caltech/CSIRO/NANTEN2/C. Clark (STScI)

The Small Magellanic Cloud is a satellite of the Milky Way, containing about 3 billion stars. This far-infrared and radio view of it shows the cool (green) and warm (blue) dust, as well as the hydrogen gas (red). The image is composed of data from four retired observatories and supplemented with the Parkes, ATCA, and NANTEN radio telescopes. 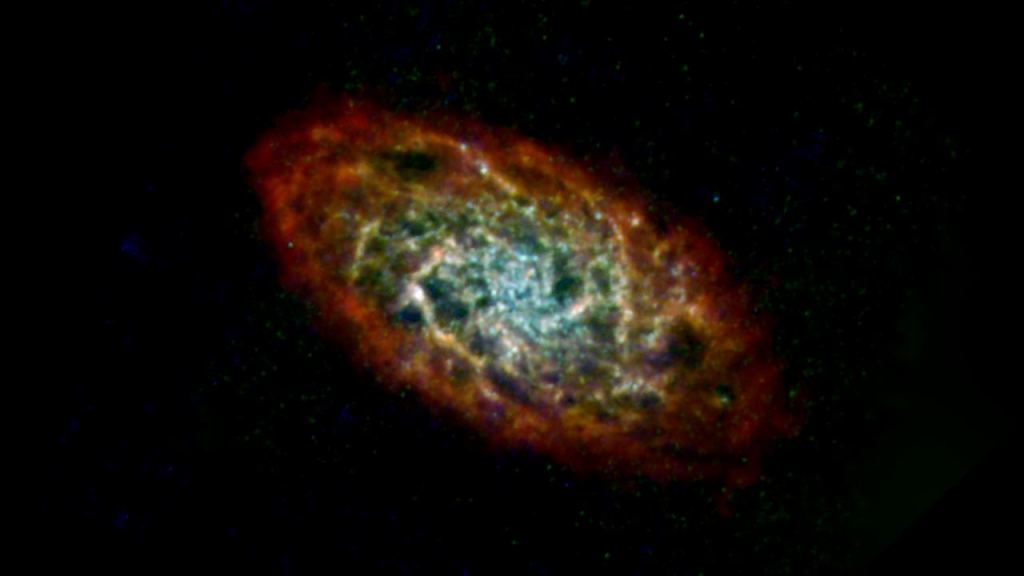 The Triangulum galaxy, or M33, is shown here in far-infrared and radio wavelengths of light. Some of the hydrogen gas (red) that traces the edge of the Triangulum’s disc was pulled in from intergalactic space, and some was torn away from galaxies that merged with Triangulum far in the past. Additional data is from the Very Large Array, Green Bank Telescope, and IRAM radio telescope. 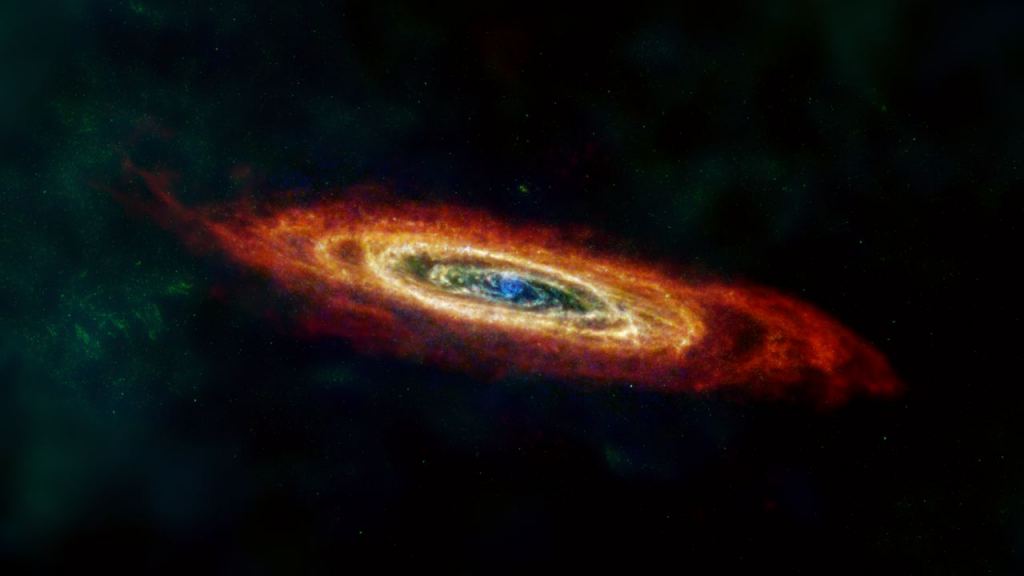 The Andromeda galaxy, or M31, is shown here in far-infrared and radio wavelengths of light. Some of the hydrogen gas (red) that traces the edge of Andromeda’s disc was pulled in from intergalactic space, and some was torn away from galaxies that merged with Andromeda far in the past. In addition to the four space telescopes, additional data came from the Green Bank Telescope, WRST, and IRAM radio telescopes.

The post A Totally new View of the Large Magellanic Cloud (and more!) From Retired Telescopes appeared first on newsastronomy.com.