A ‘throwaway’ engineering image from the James Webb Space Telescope’s commissioning phase has turned out to be a stunningly deep view of the cosmos. It rivals the deepest of Hubble Deep Field images in revealing previously unseen distant galaxies.

Webb’s Fine Guidance Sensor (FGS) enables the space observatory to find and lock onto its observing targets, enabling precision pointing for images and accurate science measurements. But the FGS is also capable of taking images.

During a week-long stability test in May, the team decided to keep the imagery that was being captured. The purpose of this engineering test was to lock onto one star and to test how well Webb could control its “roll” – literally, Webb’s ability to roll to one side like an aircraft in flight.

Even though this image has not been optimized to be a science observation, the depth quality of this image is similar to the early engineering images taken after the completion of the process to fully focus the telescope’s mirror segments. There, images from each of the segments was like its own “Deep Field,” – showing innumerable stars and galaxies – like the famous Hubble Deep Field images, but even deeper. 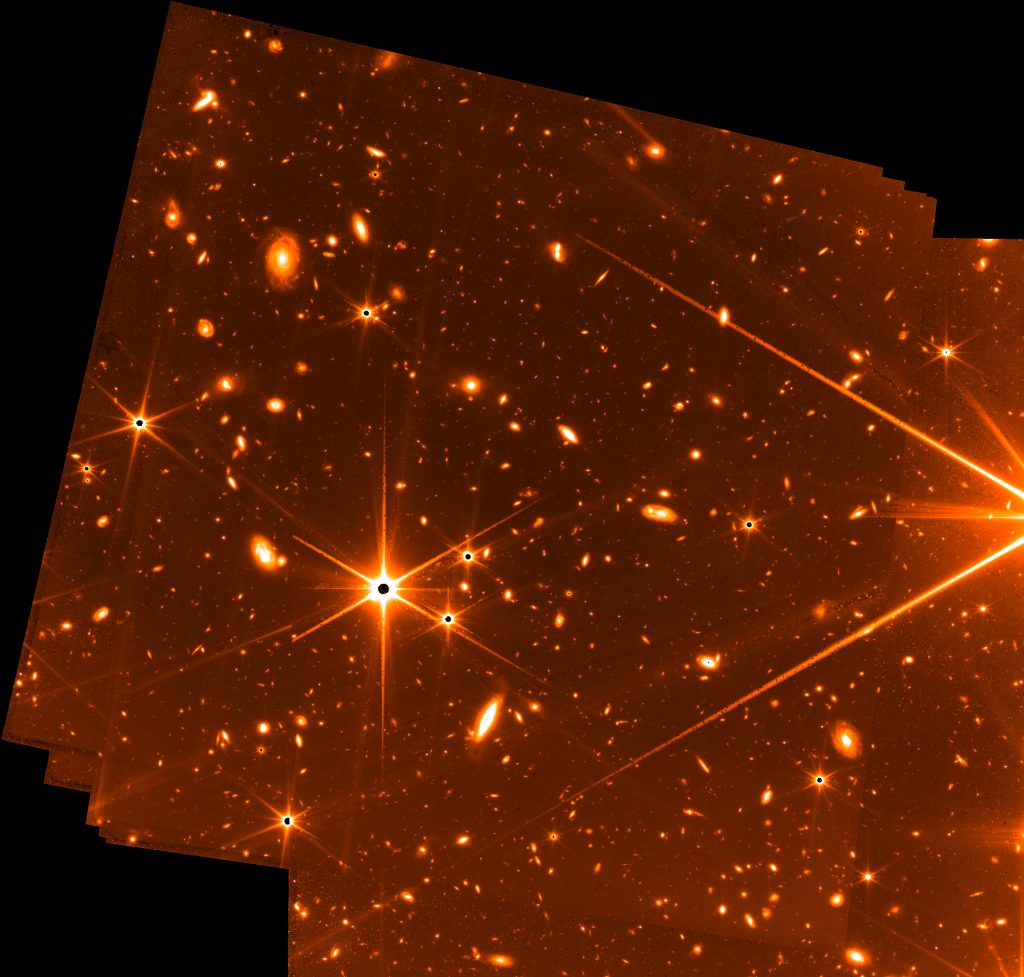 This Fine Guidance Sensor test image was acquired in parallel with NIRCam imaging of the star HD147980 over a period of eight days at the beginning of May. This engineering image represents a total of 32 hours of exposure time at several overlapping pointings of the Guider 2 channel. The observations were not optimized for detection of faint objects, but nevertheless the image captures extremely faint objects and is, for now, the deepest image of the infrared sky. The unfiltered wavelength response of the guider, from 0.6 to 5 micrometers, helps provide this extreme sensitivity. The image is mono-chromatic and is displayed in false color with white-yellow-orange-red representing the progression from brightest to dimmest. The bright star (at 9.3 magnitude) on the right hand edge is 2MASS 16235798+2826079. There are only a handful of stars in this image – distinguished by their diffraction spikes. The rest of the objects are thousands of faint galaxies, some in the nearby universe, but many, many more in the distant universe. Credit: NASA, CSA, and FGS team.

This new FGS engineering image was taken using 72 exposures over 32 hours – is among the deepest images of the universe ever taken, according to Webb scientists. In a JWST blog post, scientists said that when FGS’ aperture is open, it is not using color filters like the other science instruments – meaning it is impossible to study the age of the galaxies in this image with the rigor needed for scientific analysis. But even when capturing unplanned imagery during a test, FGS is capable of producing stunning views of the cosmos.

Talk about an overachiever!

Gaze at this test image — an unexpected & deep view of the universe — captured by Webb’s Fine Guidance Sensor (FGS) in May. Built by @csa_asc to point Webb precisely at targets, taking glamour shots isn’t even FGS’s main job: https://t.co/aQUAFHcNV5 pic.twitter.com/uYoh4t8PX2

Obviously, the test was performed successfully. But it also produced an image that sparks the imagination of scientists who will be analyzing Webb’s science data, said Jane Rigby, Webb’s operations scientist at NASA’s Goddard Space Flight Center in Greenbelt, Maryland.

“The faintest blobs in this image are exactly the types of faint galaxies that Webb will study in its first year of science operations,” Rigby said.

On Twitter, Lee Feinberg, Webb optical telescope element manager, said this image is a great example of why the past five months of commissioning the telescope was so magical for the team. “We added taking this guider data in parallel to our stability test sort of last minute for engineering reasons,” he said.

The first full color images from JWST will be released on July 12, so this tantalizing look at what JWST will be revealing certainly sparks not only scientists’ imaginations, but also the imaginations of all of us who have been anticipating this telescope for the past 30 years.

The post A Test Image From Webb Just Happens to be the Deepest Image Ever Taken of the Universe appeared first on newsastronomy.com.