When Galileo pointed his telescope at Jupiter 400 years ago, he saw three blobs of light around the giant planet, which he at first thought were fixed stars. He kept looking, and eventually, he spotted a fourth blob and noticed the blobs were moving. Galileo’s discovery of objects orbiting something other than Earth—which we call the Galilean moons in his honour—struck a blow to the Ptolemaic (geocentric) worldview of the time.

Galileo couldn’t have foreseen the age of space exploration that we’re living in now. Fast forward 400 years, and here we are. We know the Earth doesn’t occupy any central point. We’ve discovered thousands of other planets, and many of them will have their own moons. Galileo would be amazed at this.

What would he think about robotic missions to explore one of the blobs of light he spotted?

Jupiter’s moon Europa is the most compelling target in the search for life in our Solar System. Europa is covered in an ice shell between 15 to 25 kilometres (9 to 15 miles) thick. Under the ice is an ocean between 75 and 85 kilometres (46 to 53 miles) thick.

That means that this moon, the smallest of the four Galilean moons, could have three times more water than Earth. The water is warm and salty, and that means Europa could be harbouring simple life.

NASA is sending the highly-anticipated Europa Clipper to the frozen moon in 2024 (scheduled) to explore its life-supporting potential. It won’t send a probe to the surface, and in fact, it won’t actually orbit Europa itself; instead, it’ll orbit Jupiter and perform a series of flybys of Europa. 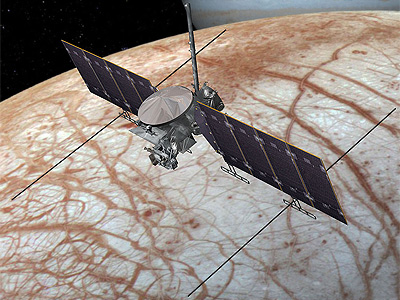 But one day, we will send a robotic explorer to Europa’s surface. And the only thing better than sending one robot to explore Europa is sending a swarm of robots to do it. That’s the idea behind the Sensing With Independent Micro-Swimmers (SWIM) concept.

A robotics engineer at NASA’s JPL received $600,000 in funding from a NASA program to develop the concept. The engineer is Ethan Schaler, and this is the second round of funding that NASA’s Innovative Advanced Concepts (NIAC) has awarded him. In phase 1 of the NIAC program, he received $125,000.

The basic idea behind the SWIM concept is to extend a Europa mission’s data-gathering reach and collect a larger sample size.

“What if, after all those years it took to get into an ocean, you come through the ice shell in the wrong place?”

Schaler’s SWIM concept describes how a spacecraft sent to Europa or another similar destination like Saturn’s moon Enceladus could use a swarm of robots for greater effectiveness. A lander would reach the surface and deploy a cryobot designed to travel through the ice shell to the ocean. Once there, the cryobot would deploy about four dozen tiny robots about the size of a mobile phone. The cryobot would have room for these independent robots, plus enough volume to host its own instruments, which would gather data during the long descent through the ice and while in the ocean.

The cryobot would be connected to the lander via a communications tether, and the stationary surface lander would be the communication point for Earth-based mission controllers. But the smaller SWIM-bots would be independent. 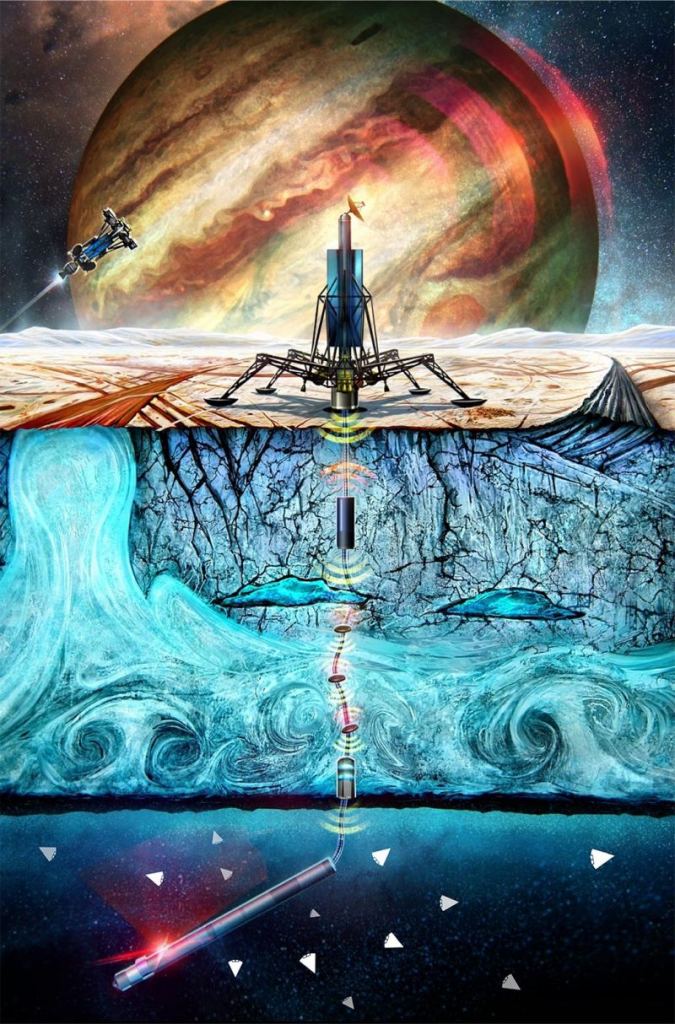 According to Schaler, the independent bots solve some of the problems associated with a mission to Europa by gathering more robust data.

“My idea is, where can we take miniaturized robotics and apply them in interesting new ways for exploring our solar system?” Schaler said. “With a swarm of small swimming robots, we are able to explore a much larger volume of ocean water and improve our measurements by having multiple robots collecting data in the same area.”

The group of independent SWIM-bots would solve another problem associated with exploring ice-covered ocean worlds. The only feasible way to get through Europa’s 15 to 25 km ice shell is with heat. The cryobot would tunnel its way through all that ice with a hot nuclear power source. Due to design and mission constraints, the cryobot would likely not travel beyond the point where it breached the bottom of the ice and reached the ocean. The cryobot’s nuclear heat source would heat up the water in the vicinity of the cryobot, and chemical reactions would change the nature of the water, polluting the data and degrading its value. The independent SWIM-bots could escape this bubble of heat and gather a more accurate picture of Europa’s ocean.

Samuel Howell is a NASA/JPL scientist involved in the Europa Clipper mission. He’s also part of the team developing the SWIM concept. “What if, after all those years it took to get into an ocean, you come through the ice shell in the wrong place? What if there are signs of life over there but not where you entered the ocean?” said Howell. “By bringing these swarms of robots with us, we’d be able to look ‘over there’ to explore much more of our environment than a single cryobot would allow.”

This illustration shows how SWIM-bots would be deployed from the cryobot and sent into the ocean to gather data. Image Credit: NASA/JPL-Caltech

Howell pointed out the similarities between SWIM and Ingenuity, the little helicopter that travelled to Mars with the Perseverance Rover.

“The helicopter extends the reach of the rover, and the images it is sending back are context to help the rover understand how to explore its environment,” he said. “If instead of one helicopter, you had a bunch, you would know a lot more about your environment. That’s the idea behind SWIM.”

Schaler says that the individual bots could also act together in a swarm if desired, much like flocks of fish do. This maneuver could play a critical role in the search for life by identifying gradients in energy or salinity. Energy gradients are deemed critical to life’s development because life basically feeds off of them. Life exploits energy gradients to make better and better copies of itself that spread through the environment, looking for other energy gradients to exploit. (In fact, in one way of looking at it, life exists to flatten energy gradients and spread entropy until no order exists in the Universe, but that’s a little off-topic. Read this if you’re curious: Physics, Life, and Everything Nice.)

“If there are energy gradients or chemical gradients, that’s how life can start to arise. We would need to get upstream from the cryobot to sense those,” Schaler said.

The SWIM-bots would each have instruments to measure temperature and salinity. They’ll also measure acidity and pressure, and each one will have its own propulsion and communication systems.

The SWIM concept is a fascinating step in the effort to explore Europa. It deals with some of the problems inherent in exploring an ocean buried under ice, whether on Europa or on one of the Solar System’s other icy-shelled ocean moons. But there are other obstacles to exploring these moons, and some of them may be extraordinarily difficult to overcome.

Europa only has an ocean because of its proximity to Jupiter. As the moon orbits the gas planet, tidal flexing heats Europa enough to keep water in its liquid state. But that proximity and tidal flexing come at a cost: Jupiter emits powerful radiation. So powerful, in fact, that NASA’s Juno mission to Jupiter keeps its sensitive instruments inside a titanium vault for protection. It also follows a polar orbit which helps it avoid the worst of the radiation. But with each orbit, the titanium vault is degraded by radiation until the instruments are so damaged the mission will effectively end. 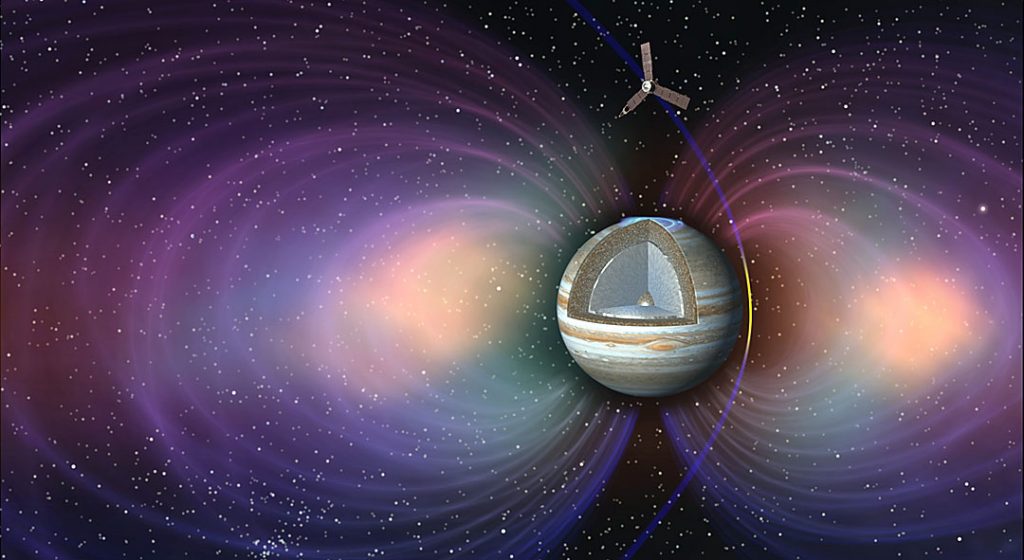 Any mission to Europa will have to contend with that radiation somehow, though the ice barrier would provide some protection for the cryobot and the SWIM-bots.

Another problem is getting a spacecraft safely onto Europa’s surface. Images show a fractured surface covered in blocky chunks of ice in some locations. Other areas are riven with crevasses. Europa’s equatorial region may be dominated by penitentes, icy spikes up to 15 meters (49 ft) high. Maneuvering to a landing spot could be very difficult. Unlike Mars, where rovers study the surface in detail and can help mission planners find safe and scientifically valuable landing spots, Europa’s surface is not well-mapped. It’s also not that well-understood. The surface could be so hard or so soft that it’s difficult to design a spacecraft that can successfully touch down on the icy surface. 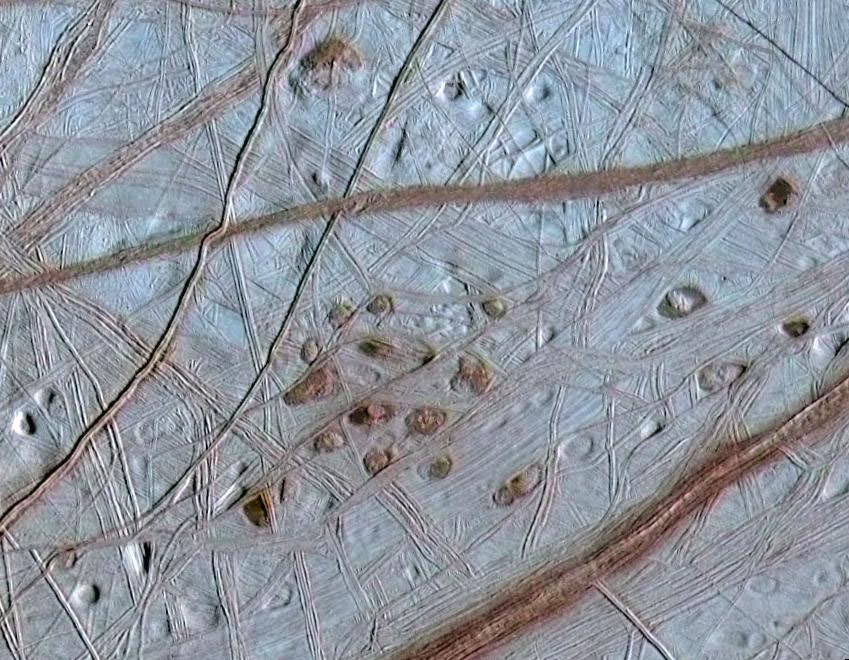 Image of Europa’s ice shell, taken by the Galileo spacecraft, of fractured “chaos terrain.” A tunnelling robot would likely be sent to this type of surface area. Image Credit: NASA/JPL-Caltech

But while the SWIM concept is just a concept at this point, the Europa Clipper isn’t. Scientists hope that the Clipper will be able to map Europa’s surface much as the Mars Reconnaissance Orbiter has done for Mars. Data from the Clipper should help a lander contend with Europa’s surface.

Hopefully, all the intellectual capital being spent on exploring Europa will pay dividends. The Europa Clipper itself won’t even reach orbit around Jupiter until 2030. So we’ll have to wait a long time before a mission ever reaches Europa’s surface. And the first surface mission might not even have a cryobot to pierce the ice and study the ocean.

But one day, barring societal collapse or something else apocalyptic, we’ll get a spacecraft there, and we’ll explore. If you’re young enough when you’re reading this, maybe you’ll be alive to hear the shouts of “Eureka!” as excited scientists announce the discovery of microbes in Europa’s vast ocean.

The post A Swarm of Swimming Robots to Search for Life Under the Ice on Europa appeared first on newsastronomy.com.