Astronomers using the ALMA Observatory have discovered an unusual, massive star near the center of our galaxy, a star that has two spiral arms. The arms are part of an accretion disk, a broad disk of dust and gas surrounding the protostar. While this is not the first star to be seen with such rare arm-like features, researchers say they believe they can track the formation of the spiral arms to a close encounter the star had with another object.

Accretions disks, also known as protostellar disks, usually form quickly around young stars, and over time the disks can stretch out to distances hundreds of times bigger than the nascent star. Astronomers say the disks are essential to star formation because they continuously feed gas from the surrounding environment to the growing stars.

Because of newer observatories with submillimeter observing capabilities like ALMA (Atacama Large Millimeter Array (ALMA) in the Atacama Desert in Chile, astronomers have been able to study distant protostars in the last few years. This has led to a wealth of observational and theoretical advances.  However, much of the previous observations of these objects have been for lower mass, Sun-like stars. 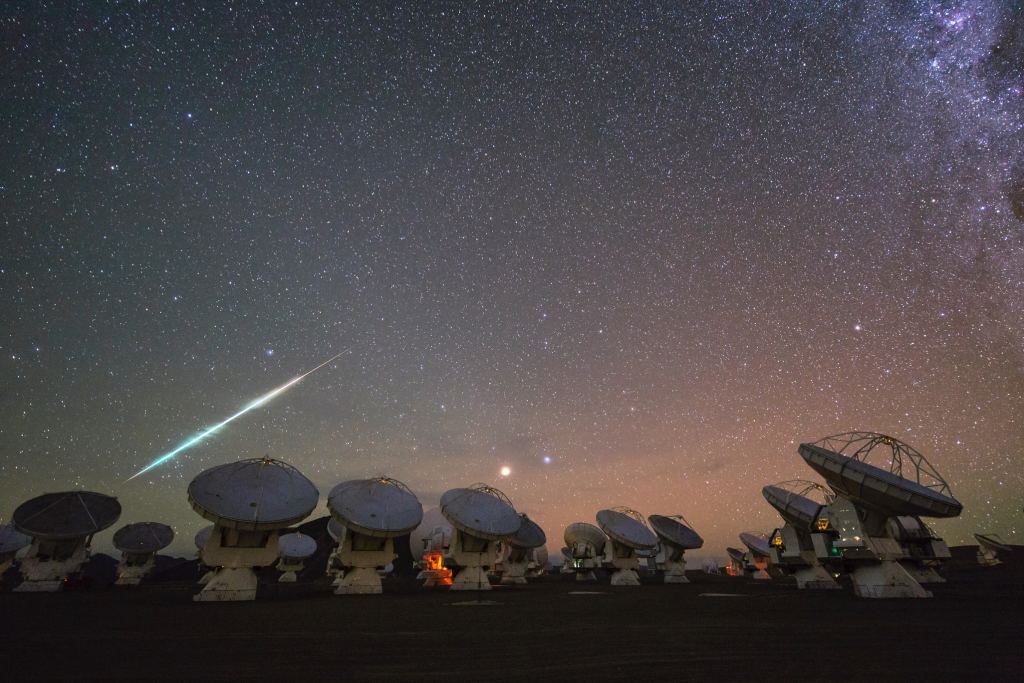 A time-lapse image of the Atacama Large Millimeter/submillimeter Array (ALMA) at the Chajnantor Plateau in the Chilean Andes, showing a blazing meteor dishes that make up the array. Credit: ALMA.

The star observed in this study is near the galactic center and is an early O-type star that is extremely hot (over 30,000 Kelvin) and massive, at 32 solar masses. The disk is gigantic, with a diameter of about 4,000 astronomical units.

Since so few stars of this type have been observed so far, the researchers say it is still unclear whether accretion disks play a role in their formation, and if so, how. These massive stars are far more luminous than the Sun — several hundreds of thousands of times greater — which strongly impact the environment of the entire galaxy. Therefore, say the researchers, understanding the formation of massive stars is of great importance.

“This system is among the most massive protostars with accretion disks and represents the first direct imaging of a protostellar accretion disk in the Galactic Center,” said Qizhou Zhang in a press release. Zhang is a co-author of the study, from the Harvard Smithsonian Center for Astrophysics. “The discovery suggests that the formation of massive early O-type stars does go through a phase with accretion disks involved.”

The central region of the Milky Way, known as the galactic center, is about 26,000 light-years away from Earth and serves as a unique and important star-forming environment. The supermassive black hole Sagittarius A*, which sits at the very center of the Milky Way, is the most well-known object in the region.

In addition, there is a massive reservoir of dense molecular gas — mainly molecular hydrogen (H2) — which is the raw material for star formation. The gas will start to form stars once gravitational collapse is initiated. However, direct observations of star-forming regions around the galactic center are challenging, given the considerable distance and the contamination from foreground gas between the galactic center and Earth. A very high resolution, combined with high sensitivity, is necessary to resolve details of star formation in this region.

Most interesting, however, is that the accretion disk clearly displays two spiral arms. Astronomers have seen spiral arms before, as they are commonly found in spiral and pinwheel galaxies where hundreds of millions of stars spiral together around a common core. However, finding a clear case of spiral arms around an individual star, is very unusual. 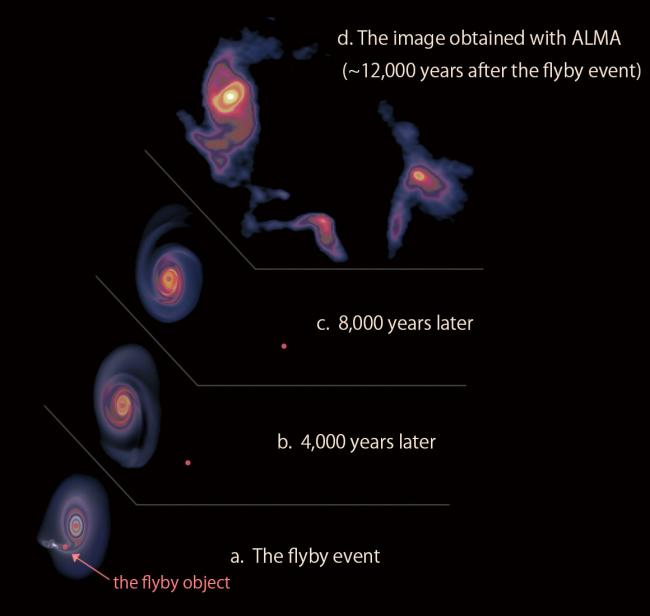 A close encounter more than 10,000 years ago stirred up a protostellar disk around a star at the galactic center. Image credit: Lu et al.

“The disk is gravitationally stable with two embedded spirals,” the team wrote in their paper, published in Nature Astronomy. “A combined analysis of analytical solutions and numerical simulations demonstrates that the most likely scenario to form the spirals is through external perturbations induced by a close flyby, and one such perturber with the expected parameters is identified.”

The researchers detected an object of about three solar masses at about 8,000 astronomical units away from the disk. Through analytics and numerical simulations, they reproduce a scenario where an object flew by the disk more than 10,000 years ago and perturbed the disk, leading to the formation of spiral arms.

“The numerical simulation matches perfectly with the ALMA observations. We conclude that the spiral arms in the disk are relics of the flyby of the intruding object,” says Xing Lu, the lead author and an associate researcher at the Shanghai Astronomical Observatory of the Chinese Academy of Sciences.

The astronomers say that this finding demonstrates that accretion disks at the early evolutionary stages of star formation are subject to frequent dynamic processes such as flybys, which would substantially influence the formation of stars and planets.

The team noted that similar flybys have also happened in our Solar System: A binary stellar system known as Scholz’s Star flew by the solar system about 70,000 years ago, probably penetrating through the Oort cloud and sending comets to the inner solar system. The researchers said that in a high steller density environment such as the galactic center, similar flybys would likely be frequent.

“The formation of stars should be a dynamical process, with many mysteries still unresolved,” says Lu. “With more upcoming high-resolution ALMA observations, we expect to disentangle these mysteries in star formation.”

The post A Star has Grown Spiral Arms appeared first on newsastronomy.com.