News Astronomy > News > A Star Came too Close to a Black Hole and was Torn Apart. Surprisingly Little Actually Went In

What happens when a star wanders too close to a supermassive black hole? The obvious story is that it gets sucked in, never to be seen again. Some of its material gets superheated on the way in and that gives off huge amounts of radiation—usually X-rays. That’s not a wrong explanation, just incomplete. There’s more to the story, thanks to a team of astronomers at the University of California at Berkeley. They used a specialized spectrograph at Lick Observatory to study a tidal disruption event. That’s where a star encountered a black hole. What they found was surprising.

Watching a Doomed Star Swirl Away

Supermassive black holes are found in galaxies throughout the universe. When a star wanders close to one, strange things happen. The gravitational pull rips the star apart and stretches some of its material in a process called “spaghettification. Recent studies of tidal disruption events suggest that other things happen, too. For example, intense winds flowing outward from the event send some of the doomed star’s material out to space. It’s all part of its weirdness. 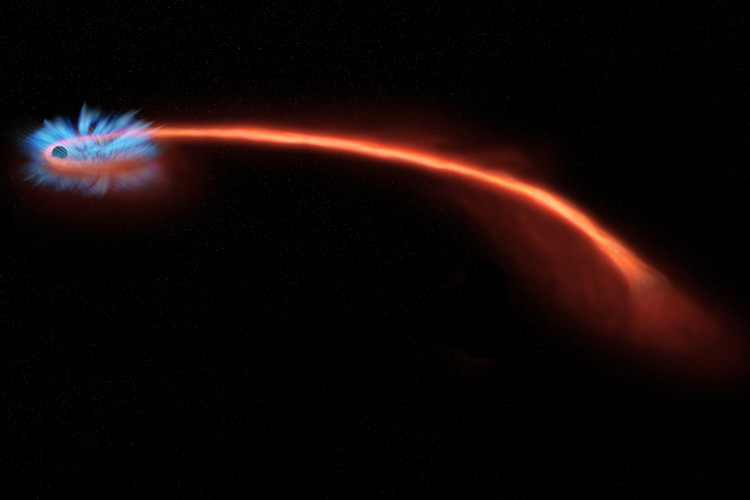 When a star (red trail) wanders too close to a black hole (left), it can be shredded, or spaghettified, by the intense gravity. Some of the star’s matter swirls around the black hole, like water down a drain, emitting copious X-rays (blue). But, some of it makes a cloud with interesting properties. (Image credit: NASA/CXC/M. Weiss)

“One of the craziest things a supermassive black hole can do is to shred a star by its enormous tidal forces,” said team member Wenbin Lu, UC Berkeley assistant professor of astronomy. “These stellar tidal disruption events are one of very few ways astronomers know the existence of supermassive black holes at the centers of galaxies and measure their properties. However, due to the extreme computational cost in numerically simulating such events, astronomers still do not understand the complicated processes after a tidal disruption.”

That’s why studying an actual star as it meets its doom is so important. The Berkeley group zeroed in on one that got too close to a black hole in an event called “AT2019qiz”. The disaster occurred some 215 million light-years away from Earth in a spiral galaxy in the constellation Eridanus. As the star spiraled into the accretion disk, it got shredded. Then something wonderfully unexpected happened. And, it took some special effort to see it.

A Polarized View of the Action

Since the disruption event looked quite bright in optical light, the team members decided to study it in polarized light to get a better sense of what was happening. Polarized light waves travel in a single plane, and that reduces the intensity of the light. (This is the same principle that polarized sunglasses use, to reduce glare.) In this case, using polarized light allowed the team to see the aftermath of the star being shredded. Usually, they don’t get to see that. Based on observations of other similar events, they also didn’t see the expected amounts of X-rays. So, what was going on?

For AT2019qiz, the spectropolarimetry observations revealed that much of star’s material never made it into the black hole’s hungry maw. Some got smeared across space. However, the intense winds from the black hole also created a spherically symmetrical high-speed cloud of leftover stellar material. The teaem clocked it rushing out at about 10,000 kilometers per second. That cloud definitely provided some surprises. “This is the first time anyone has deduced the shape of the gas cloud around a tidally spaghettified star,” said Alex Filippenko, UC Berkeley professor of astronomy and a member of the research team.

“People have been seeing other evidence of wind coming out of these events,” said Koshore Patra, a graduate student and lead author of the study. “I think this polarization study definitely makes that evidence stronger, in the sense that you wouldn’t get a spherical geometry without having a sufficient amount of wind. The interesting fact here is that a significant fraction of the material in the star that is spiraling inward doesn’t eventually fall into the black hole — it’s blown away from the black hole.”

Using polarized light provides an important tool to study what happens when other stars encounter supermassive black holes. It also gives astronomers access to events in the accretion disk of the black hole. It’s not an easy task. “These disruption events are so far away that you can’t really resolve them, so you can’t study the geometry of the event or the structure of these explosions,” Filippenko pointed out. “But studying polarized light actually helps us to deduce some information about the distribution of the matter in that explosion or, in this case, how the gas—and possibly the accretion disk—around this black hole is shaped.”

Polarized light from these types of bright “eruptions” is a valuable tool to map these events. Ultimately, such observations could help build a “tomographic” picture of a tidal disruption event as it evolves—even if it’s in a galaxy far, far away.

The Ultimate Fate of a Star Shredded by a Black Hole
Spectropolarimetry of the tidal disruption event AT 2019qiz: a quasispherical reprocessing layer

The post A Star Came too Close to a Black Hole and was Torn Apart. Surprisingly Little Actually Went In appeared first on newsastronomy.com.