When NASA sent the Mars Reconnaissance Orbiter (MRO) to the red planet in 2006, the spacecraft took an instrument with it called CRISM—Compact Reconnaissance Imaging Spectrometer for Mars. CRISM’s job is to produce maps of Mars’ surface mineralogy. It’s been an enormous success, but unfortunately, the loss of its last cryocooler in 2017 means the spectrometer can only undertake limited observations.

But CRISM is going out with a bang, creating one final image of the surface of Mars that NASA will release in batches over the next six months.

“It’s effectively a whole new data set that will fuel a second wave of discoveries about Mars’ surface composition.” 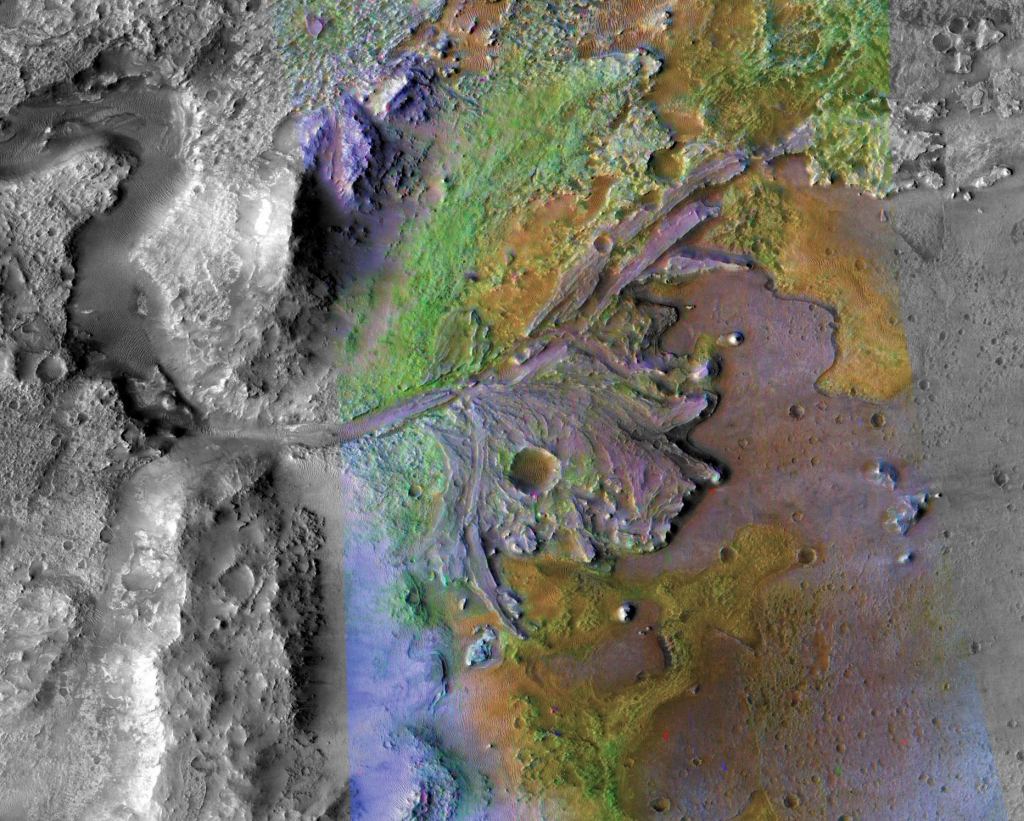 Jezero Crater on Mars was the landing site for NASA’s Mars 2020 rover. The colours in this image show surface minerals detected by CRISM, which helped identify the crater as a desirable landing site. The green colour represents carbonates, which are good at preserving fossils. Image Credit: NASA/JPL-Caltech/ASU

We already have the first portions of the new map. The final version of the map will contain about 51,000 540-kilometre-long strips, contained in 1764 tiles. In mid-June, NASA released 48 of those tiles, and they cover five of Mars’ most scientifically interesting regions.

The final map is a whole new data set and the first of its kind. The data has been gathered over the mission’s years but has never been put together, though mission scientists had this project in the back of their minds. “We’ve had the map tiles as a product set on the books really from the very beginning,” said Frank Seelos, a planetary scientist at APL and lead on the CRISM mapping project. “We knew we wanted to do this, but it took us many, many years to get to the point where we had enough data and the tools needed to make it worthwhile.” 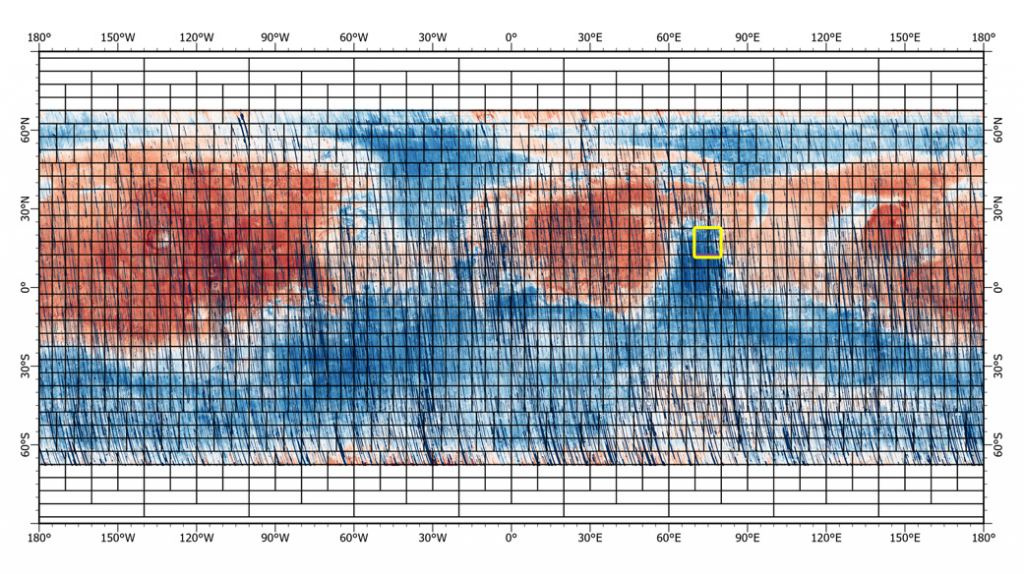 A near-global map of Mars, composed of nearly 51,000 mapping strips mosaicked into 1,764 tiles. The grid overlay shows the boundaries of the individual tiles. An additional 100 tiles in each polar region — not included here — are being processed separately. The map shows familiar large-scale surface brightness patterns, largely governed by the distribution of bright-red iron oxide-bearing dust. Darker, relatively dust-free regions consist of impact-fragmented crustal rock and wind-blown sand. The Nili Fossae region, where the Mars 2020 (Perseverance) rover is exploring Jezero Crater near the top-right quadrant, is indicated by the yellow box in the center-right part of the map. It’s also the location of the leading image. Credit: NASA/JPL-Caltech/Johns Hopkins APL

CRISM has made about 33,000 high-resolution images over the years, and they’ve helped identify landing sites for rover missions, and also inform the future Mars Sample Return mission. But while it was doing that work, it was also gathering lower-resolution mapping strips, about 83,000 of them. Now that CRISM is no longer active, the team is building their map from those strips. 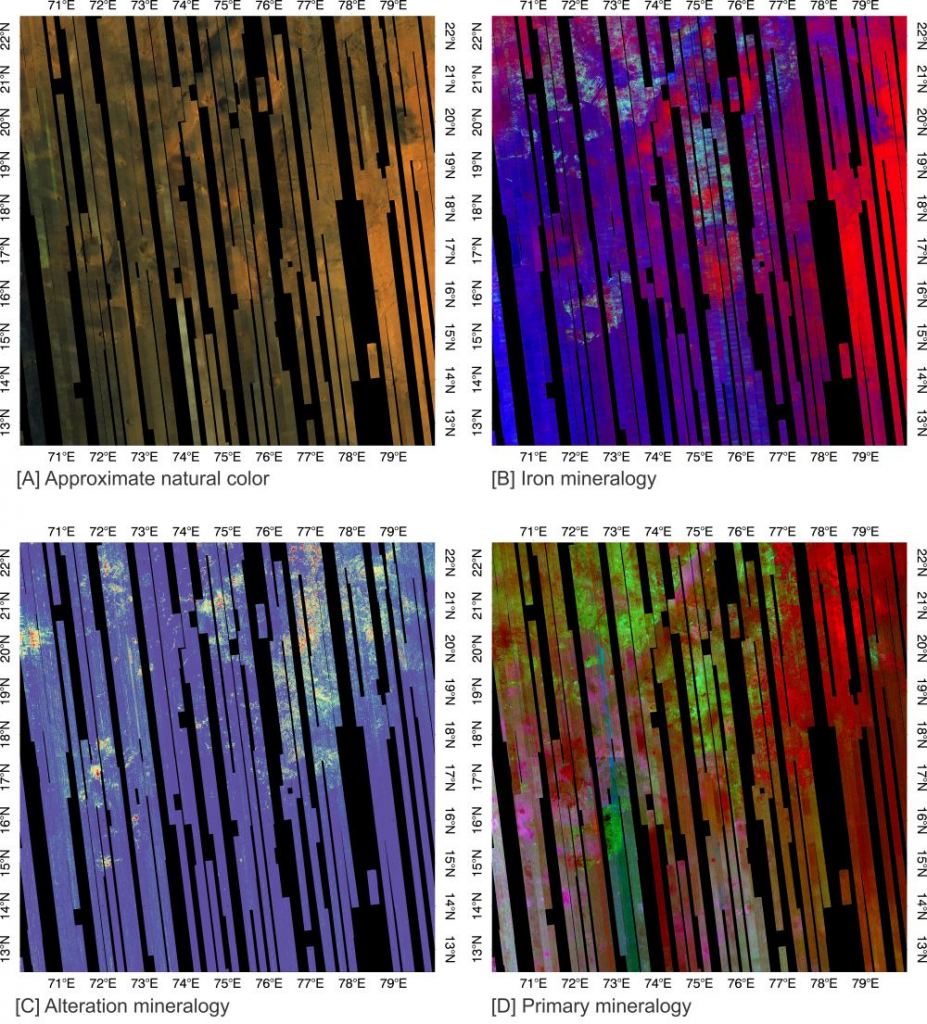 Processing this much data into one cohesive map is a complicated task requiring powerful computing resources. It takes time to optimize the maps and account for environmental conditions and discrepancies between the different images. “For an individual tile, the optimization process might take just five hours in some exceptional cases, but sometimes it will take over a day,” said CRISM team member Katie Hancock, a software developer at APL who spearheaded the development of the optimization code. In a press release from JH/UAPL, Hancock said that it could take a computer cluster a month to build the map of the entire planet.

The map will be important for years to come and will fuel future discoveries about Mars. “It’s effectively a whole new data set that will fuel a second wave of discoveries about Mars’ surface composition,” said Scott Murchie, a planetary scientist at the Johns Hopkins Applied Physics Laboratory (APL) in Laurel, Maryland, and CRISM’s principal investigator. “In fact, one of the objectives of the next MRO extended mission is for its HiRISE camera to go back and image in colour the hundreds of new high-science priority spots we’re finding on the map — spots that haven’t been imaged at high resolution because their importance wasn’t known.”

CRISM is still operational in a limited way. Without a cryocooler, it can’t perform infrared observations and will be limited to visible light operations. It’s in standby mode right now and is on deck until it’s decommissioned in a few months.

The Mars Reconnaissance Orbiter is still going strong and has exceeded its planned mission length by several years. In 2018 NASA said it wants to keep the spacecraft operating through the late 2020s, at least. One of the obstacles to greater longevity is its aging gyroscopes, but NASA said they can rely on stellar navigation to maintain the spacecraft’s orientation. MRO’s HiRISE camera has captured almost 70,000 high-resolution images of the surface of Mars. It doesn’t rely on a cryocooler so as long as MRO is operating, we’ll still be seeing stunning visible light images of Mars.

Frank Seelos, the lead on the CRISM mapping project, points out that the mission has been a success and the instrument doesn’t need to contribute any more than it has already to be a big part of Mars’ exploration.

“The warranty on this thing expired years ago before my kids were even born,” Seelos said. “The CRISM investigation has been very long-lived, and the fact that we were able to take data for so many years is amazing. The release of these tiles is a kind of exclamation point for the instrument’s legacy.” 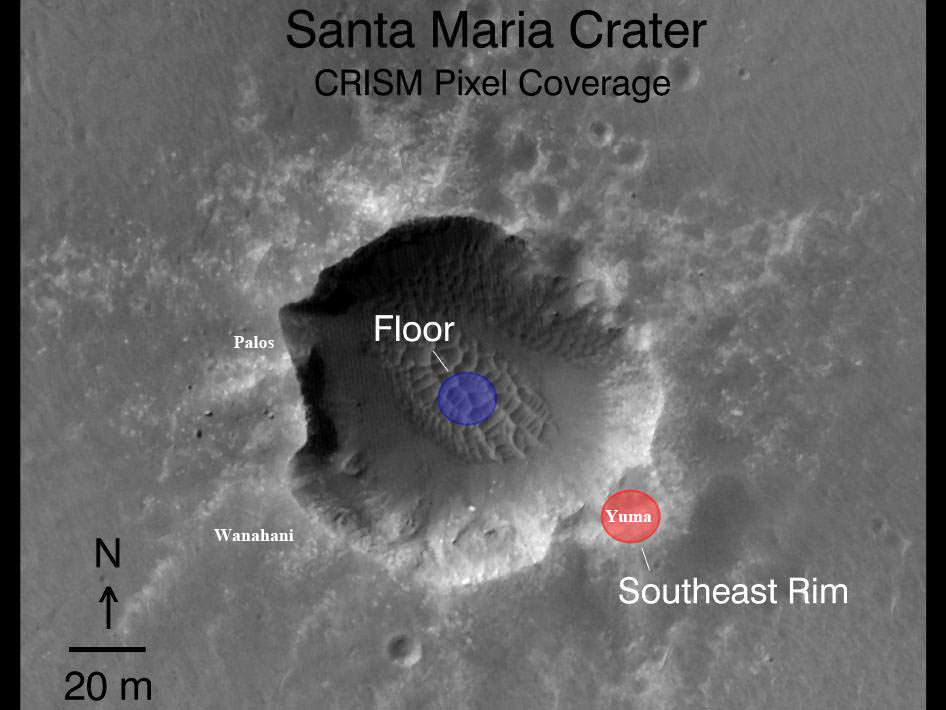 CRISM has left its mark on multiple missions to Mars. This is an image of Mars’ Santa Maria Crater from Orbit. NASA’s Opportunity rover arrived at the western rim of Santa Maria Crater, some 90 meters wide, on Dec. 16, 2010, at a spot called “Palos”. Opportunity then drove in a counterclockwise direction to a spot called “Wanahani” at the southern edge. Researchers used data collected by CRISM to direct Opportunity’s route to Endeavour crater. Spectral observations recorded by CRISM indicated the presence of water-bearing sulphate minerals at the location shown by the red dot on the southeast rim crater. This image was taken by the High-Resolution Imaging Science Experiment (HiRISE) camera also on MRO. Credit: NASA/JPL-Caltech/Univ. of Arizona.

“The CRISM investigation has been one of the crown jewels of NASA’s MRO mission,” said Richard Zurek, the mission’s project scientist at NASA’s Jet Propulsion Laboratory in Southern California. “Analyses based on these final maps will provide new insights into the history of Mars for many years to come.”

If you’d like to take a deeper look at what CRISM shows us about the minerals on Mars’ surface, visit JHUAPL’s MICA site. MICA is a downloadable set of published descriptions and type locations of unique spectral features identified on Mars by using data from CRISM. It was published in 2019.

The post A New Map of Mars, Made From 51,000 Orbital Images appeared first on newsastronomy.com.