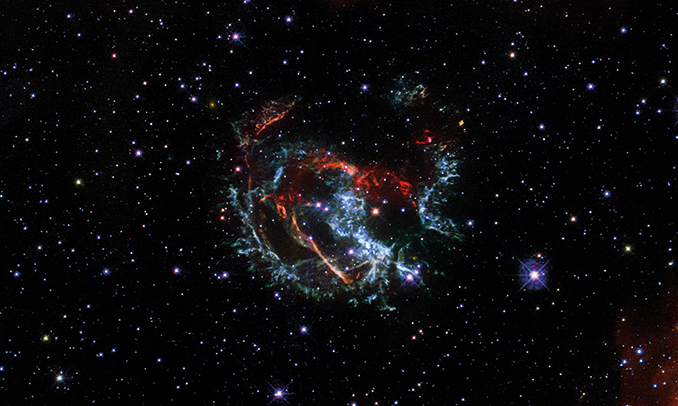 These delicate yet fast-moving filaments of gas belong to a supernova remnant designated as 1E 0102.2-7219, which resulted from the destruction of a massive star long ago in the Small Magellanic Cloud, 200,000 light years away. This Hubble Space Telescope image is shown in false colour, the blue indicating strands of gas moving towards us, and red signifying material moving away from us on the other side of the explosion. These strands and filaments are expanding at an average rate of 3.2 million kilometres per hour, and by tracing their motion backwards through time, astronomers have deduced that the progenitor star exploded 1,700 years ago. However, there is no written record of this supernova having been seen by Southern Hemisphere inhabitants at the time.

There’s a neutron star hidden among the gas of this supernova remnant. Previously identified through joint observations by the Very Large Telescope in Chile and NASA’s orbiting Chandra X-ray Observatory, it too is racing away from the scene of the explosion at about three million kilometres per hour. Image: NASA/ESA/J. Banovetz and D. Milisavljevic (Purdue University).