When white dwarfs go wild, their planets suffer through the resulting chaos. The evidence shows up later in and around the dying star’s atmosphere after it gobbles up planetary and cometary debris. That’s the conclusion a team of UCLA astronomers came to after studying the nearby white dwarf G238-44 in great detail. They found a case of cosmic cannibalism at this dying star, which lies about 86 light-years from Earth.

If that star were in the place of our Sun, it would ingest the remains of planets, asteroids, and comets out to the Kuiper Belt. That expansive buffet makes this stellar cannibalism act one of the most widespread ever seen.

“We have never seen both of these kinds of objects accreting onto a white dwarf at the same time,” said lead researcher Ted Johnson, a physics and astronomy graduate of UCLA. “By studying these white dwarfs, we hope to gain a better understanding of planetary systems that are still intact.” 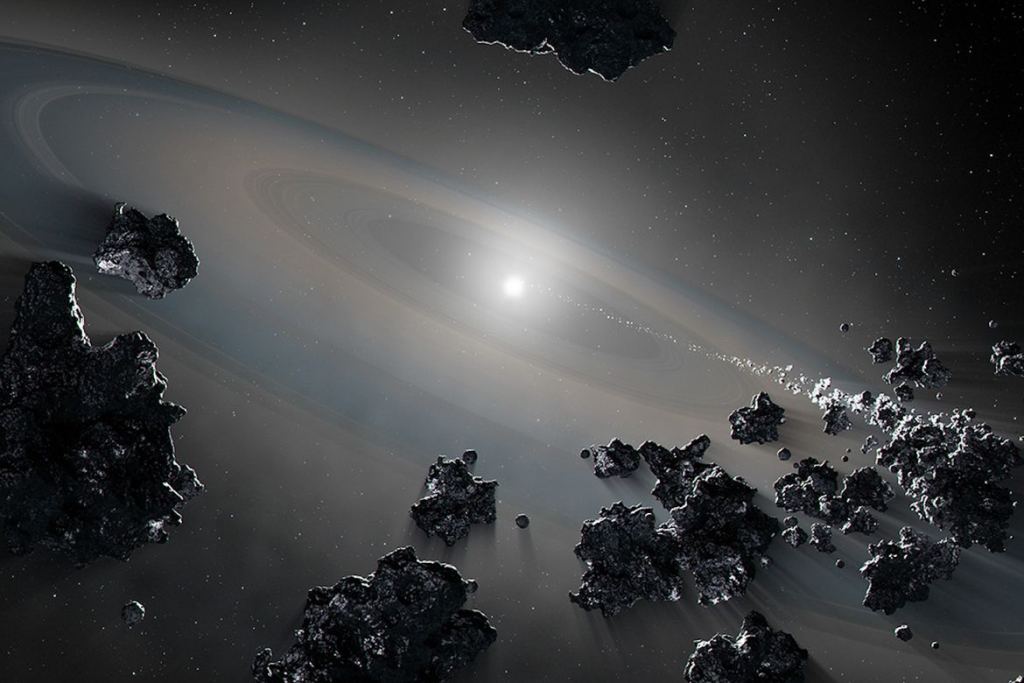 An artist’s view of a white dwarf siphoning off debris from shattered worlds in its planetary system. Courtesy NASA/ESA, Joseph Olmstead (STScI)

Finding Evidence of Chaos at a Dying Star

Johnson was part of a team from UCLA, UC San Diego, and the University of Kiel in Germany working to study chemical elements detected in and around the white dwarf atmosphere. They used data from NASA’s retired Far Ultraviolet Spectroscopic Explorer, the Keck Observatory’s High-Resolution Echelle Spectrometer in Hawaii, and the Hubble Space Telescope’s Cosmic Origins Spectrograph and Space Telescope Imaging Spectrograph. The team found and measured the presence of nitrogen, oxygen, magnesium, silicon, and iron, as well as other elements.

The iron is particularly interesting since it makes up the cores of rocky planets like Earth or Mars. Its presence is a clue that terrestrial-type worlds once orbited G238-44. The presence of high amounts of nitrogen implies the system had a pool of icy bodies as well.

As stars like the Sun enter very old age, they leave behind burned-out cores called white dwarfs. Over billions of years, these remnants of dying stars slowly cool down. Before they get to that point, however, the actual death throes can be quite violent and messy. That’s when they cannibalize the worlds around them. The discovery of the “leftovers” of those planets, comets, and asteroids, in the atmosphere of G238-44 paints an ominous picture of our solar system’s future. 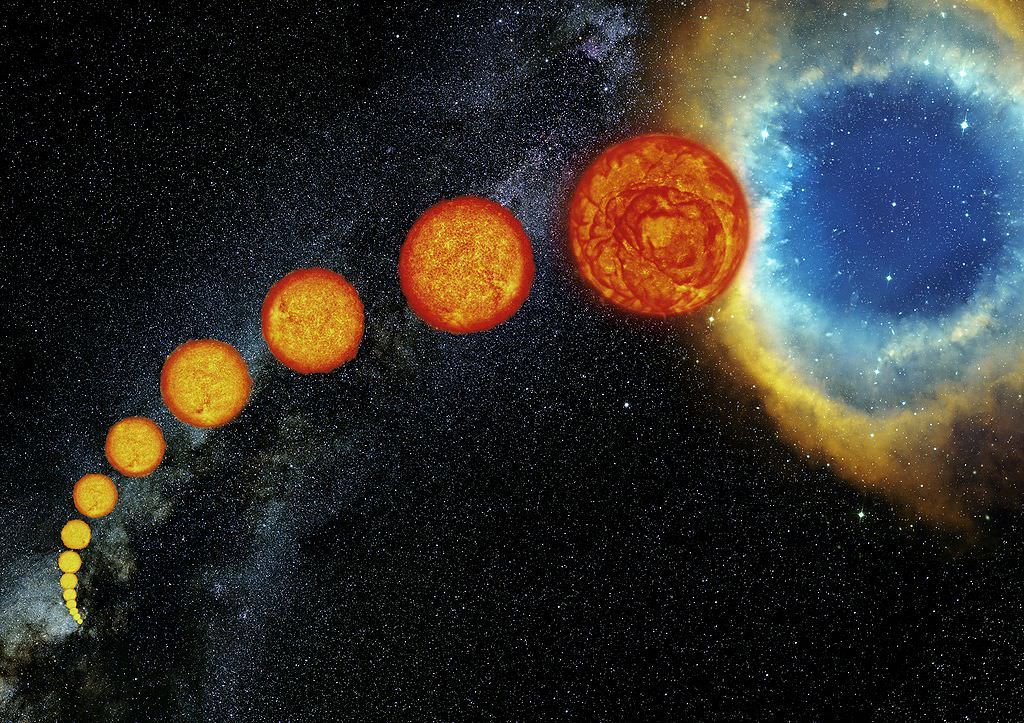 The evolution of our Sun as a dying star to become a red giant, then form a planetary nebula, and eventually end up as a white dwarf. That evolutionary process also also affects worlds and other objects in its system. Image Credit: ESO/S. Steinhofel

We can expect our Sun to go through the process starting in about five billion years. First, it will balloon out to become a red giant, swallowing up planets possibly out to the orbit of Earth. Then, it will lose its outer layers, forming what we call a “planetary nebula”. Once all that’s dissipated to space, what’s left is the massive, but tiny white dwarf.

The whole process will tear apart the solar system, ripping planets to shreds and scattering comets and asteroids. Any of those objects that come too close to the white dwarf Sun will get sucked in and destroyed. The scale of the destruction occurs fairly quickly if G238-44’s example is any clue. This study shows the shocking scale of the chaos. Within 100 million years after it entered its white dwarf phase, the dying star was able to capture and consume material from its nearby asteroid belt and its far-flung Kuiper belt–like regions.

The slow destruction of G238-44’s planetary system, with the tiny white dwarf at the center, surrounded by a faint accretion disk made up of pieces of shattered bodies falling onto the dead star. Any remaining asteroids form a thin stream of material surrounding the dying star. Larger gas giant planets may still exist in the system, and much farther out is a belt of icy bodies such as comets. The process of gobbling up the leftovers of its worlds commenced shortly after the star entered its white dwarf phase. Courtesy: NASA, ESA, Joseph Olmsted (STScI)

What Else This White Dwarf Reveals

Not only does this finding show what’s in our future, but it also supplies interesting insight into how other systems form. It offers clues to what they contain, and a peek at our own solar system’s past. For example, astronomers think that icy objects crashed into dry, rocky planets in our own infant solar system. That’s in addition to the rocky materials that helped create our planet. For G238-44, that means an interesting amalgamation of stuff from a variety of regions and the evidence shows it.

“The best fit for our data was a nearly two-to-one mix of Mercury-like material and comet-like material, which is made up of ice and dust,” Johnson said. “Iron metal and nitrogen ice each suggest wildly different conditions of planetary formation. There is no known solar system object with so much of both.”

A Dying Star Gives Other Clues

The death of this sun-like star and its penchant for gobbling up debris has another interesting twist. Billions of years ago, comets and asteroids likely delivered water to our planet, sparking the conditions necessary for life. According to Benjamin Zuckerman, UCLA professor of physics and astronomy, the combo of icy and rocky material detected raining onto G238-44 shows that other planetary systems may have icy reservoirs (like the Kuiper Belt and Oort Cloud). That’s in addition to rocky bodies such as Earth and the asteroids.

“Life as we know it requires a rocky planet covered with a variety of volatile elements like carbon, nitrogen, and oxygen,” Zuckerman said. “The abundances of the elements we see on this white dwarf appear to have come from both a rocky parent body and a volatile-rich parent body—the first example we’ve found among studies of hundreds of white dwarfs.”

It’s intriguing to think that our own Sun could be doing the same thing in a few billion years. Perhaps some future astronomer on a planet a few dozen light-years away will do the same study that Johnson and his team did—and spot the remains of Earth in the white dwarf Sun’s dying glow.

The post A Dying Star’s Last Act was to Destroy all Its Planets appeared first on newsastronomy.com.