The James Webb Space Telescope’s multi-wavelength observations of the Southern Ring Nebula reveal the dying throes of a star flinging off vast amounts of stellar debris, and showed for the first time the star responsible for the spectacle is sheathed in its own cloak of dust.

These side by side views of the Southern Ring Nebula were captured in different wavelengths by the James Webb Space Telescope’s U.S.-built Near Infrared Camera (left) and European Mid-Infrared Instrument (right). The planetary nebula is located 2,500 light-years from Earth.

There are two stars in the middle of the ball of gas and dust. The brighter of the two is an earlier stage of stellar evolution, and the dimmer object is a white dwarf star that has been expelling ionized gas and dust for thousands of years.

Webb’s science instruments, with imaging and spectroscopic measurement capabilities, will allow astronomers to measure the chemical make-up of feature across the sky. The $10 billion mission — the largest telescope ever put into space — is led by NASA, with contributions from the European Space Agency and the Canadian Space Agency.

“This observation shows the Southern Ring Nebula almost face-on, but if we could rotate it to view it edge-on, its three-dimensional shape would more clearly look like two bowls placed together at the bottom, opening away from one another with a large hole at the center,” NASA said in a press release.

The star at the end of its life cycle has been ejecting successive waves of material, visible in Webb’s imagery like the rings of a tree trunk. The outermost layers were expelled first.

“As the star is dying, in its last dying throes, it starts to shake. It pulsates. And at the end of that, poof, it come out,” said Klaus Pontoppidan, Webb’s project scientist at the Space Telescope Science Institute in Baltimore, Maryland, where the observatory is controlled. “So you see what the star did just before it created this planetary nebula. I find it fascinating because it’s like geological layers, and you can see the history of its last moments.” 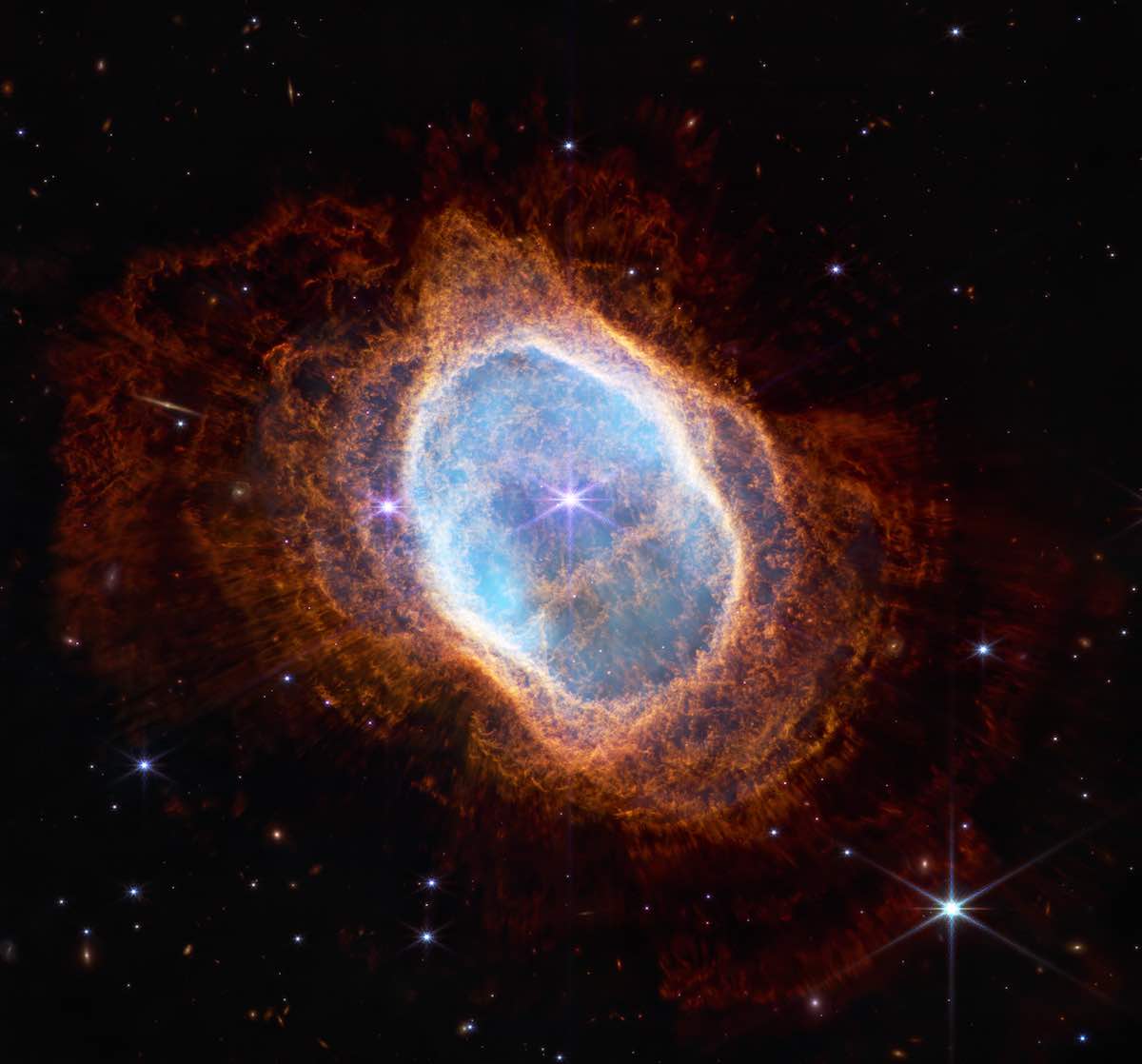 The bright star at the center of NGC 3132, while prominent when viewed by NASA’s Webb Telescope in near-infrared light, plays a supporting role in sculpting the surrounding nebula. A second star, barely visible at lower left along one of the bright star’s diffraction spikes, is the nebula’s source. It has ejected at least eight layers of gas and dust over thousands of years. This image was taken by Webb’s Near Infrared Camera. The blue material is ionized gas. Credit: NASA, ESA, CSA, STScI

Radial lines emanating through the outer edge of the nebula’s debris cloud come from starlight shining out through holes in the dust, like sunlight piercing gaps in a cloud.

“As the star ejects shells of material, dust and molecules form within them – changing the landscape even as the star continues to expel material,” NASA said. “This dust will eventually enrich the areas around it, expanding into what’s known as the interstellar medium. And since it’s very long-lived, the dust may end up traveling through space for billions of years and become incorporated into a new star or planet.”

Webb’s MIRI instrument, which sees longer-wavelength light not visible to telescopes like Hubble, was able to obtain the best view of the star responsible for it all at the center of the Southern Ring Nebula.

The blue light in the MIRI image is the signal from hydrocarbon grains, according to Karl Gordon, a mid-infrared astronomer. The inner region of the nebula is glowing hot, and MIRI revealed both the still-active bright star and the dimmer white dwarf, which itself is blanketed in a tightly-bound blanket of dust.

“At the longer wavelengths with MIRI, that hidden star just pops out,” said Chris Evans, Webb’s project scientist at the European Space Agency, which managed development of the MIRI instrument. “You’ve got that dust-obscured white dwarf in there.”

“It’s by having that long wavelength — for the first time with this fidelity and sensitivity — that it just pops straight out and we can kind of reconstruct the history of it,” Evans said in a press conference Tuesday.