What happens when a massive star dies? Conventional wisdom (and observational evidence) say that it can collapse to form a “stellar-mass” black hole. Astronomers detect black holes by the X-ray emissions they emit.

But, what if the black hole isn’t giving off high levels of X-ray emissions? Then, it could be a very rare object indeed: a dormant black hole. Not many of these have been seen. So, it’s exciting to know that a team of astronomers has found one. It’s called VFTS 243. They detected it in Very Large Telescope observations of stars in the Tarantula Nebula, in the neighboring Large Magellanic Cloud.

Finding a Needle in a Galactic Haystack

VFTS 243 is the first dormant black hole to be unambiguously detected outside the Milky Way Galaxy. While there are likely billions of stellar-mass black holes out there, dormant ones are much harder to find. “We identified a ‘needle in a haystack’,” said team leader Tomer Shenar, a Marie-Curie Fellow at Amsterdam University, the Netherlands.

It’s not for lack of looking, and astronomers have searched. “It is incredible that we hardly know of any dormant black holes, given how common astronomers believe them to be”, said team member Pablo Marchant of KU Leuven.

This newly found dormant black hole is at least nine times the mass of our Sun. It’s in a 10.4-day orbital dance with a hot, blue star 25 times the mass of the Sun. The black hole itself has about 9 solar masses. It’s considered dormant because it’s not emitting large amounts of X-rays. Normally, that would happen as material spirals into its accretion disk from the nearby companion star. 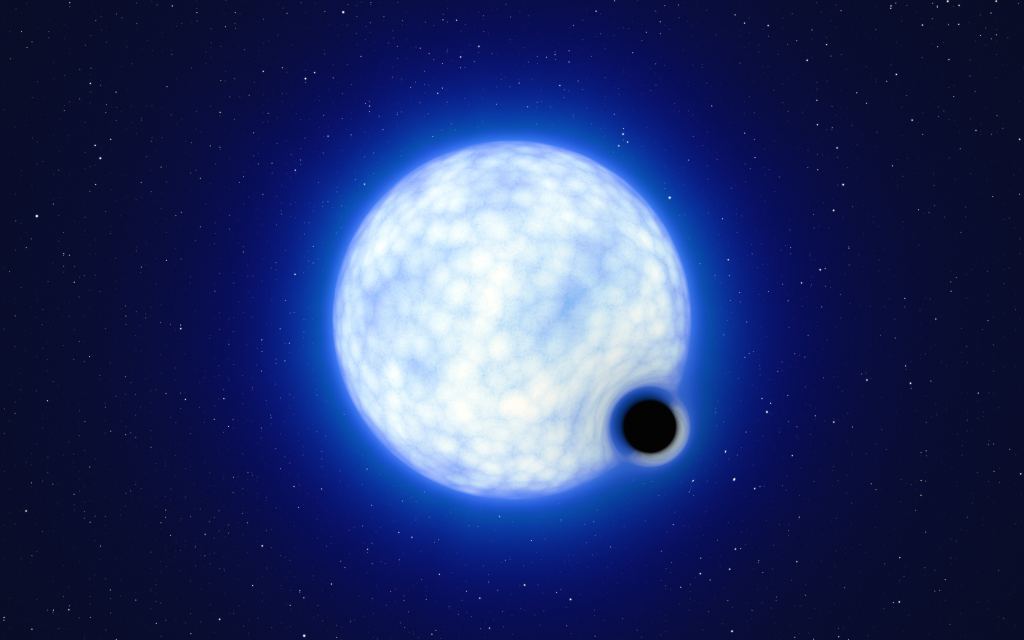 This artist’s impression shows what the binary system VFTS 243 might look like if we were observing it up close. The sizes of the two binary components are not to scale: in reality, the blue star is about 200 000 times larger than the black hole.  Note that the ‘lensing’ effect around the so-called “dormant” black hole is shown for illustration purposes only, to make this dark object more noticeable in the image. The inclination of the system means that, when looking at it from Earth, we cannot observe the black hole eclipsing the star. Credit: ESO/L. Calçada

Although astronomers know the general story about how a massive star evolves to become a stellar-mass black hole, there are many details of the process to explore. This discovery gives the team a new way to look at the black hole “factory”. Typically, a stellar-mass black hole forms as the core of a dying massive star collapses. However, for a dormant black hole, it’s not clear if the collapse was followed by a powerful supernova explosion. This new one may have taken a very different route to “black hole-hood”. In fact, there are some interesting clues that point to an alternate evolutionary path. First, it’s in a near-circular orbit and its motions indicate there was little ejected material from an explosion. In addition, there’s no evidence of a form of rebound called a “black hole kick” as the object collapsed. So, what happened?

“The star that formed the black hole in VFTS 243 appears to have collapsed entirely, with no sign of a previous explosion,” said Shenar, who noted that the team’s discovery has implications for understanding the properties of core-collapse supernovae as well as gravitational-wave detections. “Evidence for this ‘direct-collapse’ scenario has been emerging recently, but our study arguably provides one of the most direct indications. This has enormous implications for the origin of black-hole mergers in the cosmos.”

There’s more than a bit of irony in this discovery since team members are sometimes referred to as the “black hole police.” That’s because Shenar and other colleagues have frequently debunked proposed sightings of other black holes. So, the fact that they searched for and found this dormant black hole is an interesting experience. And, their search took a while and a lot of data.

To find VFTS 243, the collaboration used observations of nearly a thousand massive stars in the Tarantula Nebula. The data came from the VLT FLAMES Tarantula Survey, and team members used it to identify stars that might have black holes as companions. Because alternative explanations exist for such objects, identifying these companions as dormant black holes is extremely difficult.

“As a researcher who has debunked potential black holes in recent years, I was extremely skeptical regarding this discovery,” said Shenar. His skepticism was shared by co-author Kareem El-Badry of the Center for Astrophysics at Harvard, in the USA. Thanks to El-Badry’s reputation as a skeptic, Shenar calls him the ‘black hole destroyer’. “When Tomer asked me to double check his findings, I had my doubts,” said El-Badry. “But I could not find a plausible explanation for the data that did not involve a black hole.”

Despite the nickname ‘black hole police’, the team expects very active scrutiny of their dormant black-hole discovery. They also hope that their work will enable the discovery of other stellar-mass black holes orbiting massive stars. As an example of just how plentiful these objects are, the team predicts thousands of them exist in Milky Way and the Magellanic Clouds.

“Of course I expect others in the field to pore over our analysis carefully, and to try to cook up alternative models,” said El-Badry. “It’s a very exciting project to be involved in.”

The post A Dormant Black Hole has Been Discovered Just Outside the Milky Way appeared first on newsastronomy.com.