Located in the Northern Cape of South Africa, the MeerKAT telescope consists of 64 powerful radio antennas dedicated to probing the mysteries of the Universe. This facility is a precursor to the future Square Kilometer Array Observatory (SKAO), which will consist of MeerKAT and the Hydrogen Epoch of Reionization Array (HERA) in South Africa and the Australian SKA Pathfinder (ASKAP) and Murchison Radio-astronomy Observatory in Australia. A primary aim of the SKAO is to understand the matter content of the Universe and what mechanisms are driving its evolution and expansion.

The best way to do this is to observe the structure of the Universe on the largest of scales, where astronomers can observe the distribution of galaxies, the nature of gravity, and the role of dark matter and dark energy. To this end, an international team of astronomers has combined the power of MeetKAT’s 64 radio telescopes to detect faint signatures of neutral hydrogen gas across cosmological scales. The resulting accuracy and sensitivity provide a demonstration of what the SKAO will be able to achieve in the near future.

The international team’s findings are described in a recent paper that appeared online and was submitted for publication by the Monthly Notices of the Royal Astronomical Society. The team was led by Steven Cunnington of the Jodrell Bank Centre for Astrophysics and included members from the South African Radio Astronomy Observatory (SARAO), the Shanghai Astronomical Observatory, the Istituto Nazionale di Fisica Nucleare (INFN), the Instituto de Astrofísica e Ciências do Espaçol, the NAOC-UKZN Computational Astrophysics Center, and multiple research institutes and Universities. 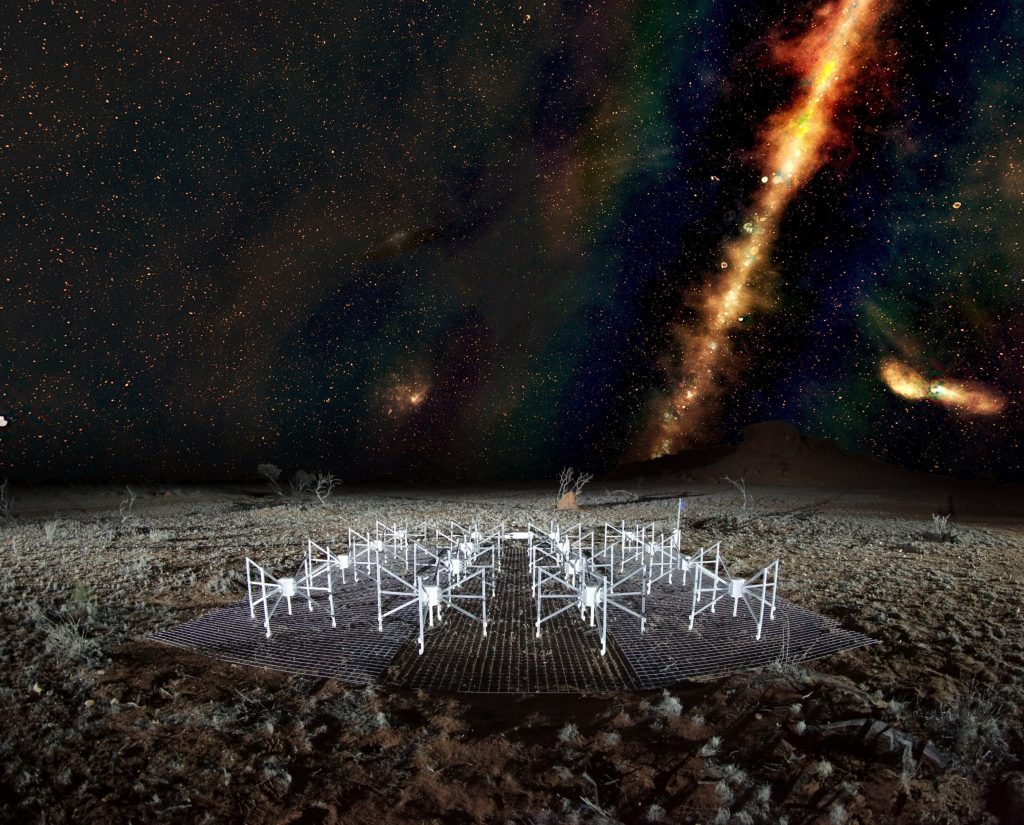 Radio telescopes are immensely valuable when it comes to cosmology, which is the study of the origin, evolution, and future of the Universe. In particular, radio telescopes can detect radiation at wavelengths of 21 cm, a part of the radio spectrum generated by neutral hydrogen. As the most abundant element in the Universe today, analyzing it in three dimensions allows astronomers to map the total distribution of matter in the Universe. It also permeated the cosmos a few hundred thousand years after the Big Bang, when the first stars and galaxies were only beginning to form.

Because of the lack of visible light in this period, astronomers know it as the “Cosmic Dark Ages,” which was dispelled about 1 billion years after the Big Bang by the earliest galaxies. The study of neutral hydrogen at 21cm wavelength will, therefore, allow astronomers to pierce the veil of the “Dark Ages” and watch as the galaxies we observe today first come together. To accomplish this feat, astronomers need radio antennas that combine immense power and sensitivity that can consistently monitor large sections of the night sky over time.

This is the purpose behind the SKAO, a next-generation array headquartered at Jodrell Bank in Cheshire, England. While it is still under construction, observatories like MeerKAT are known as “precursor facilities” that guide the SKAO’s design. By combining its 64 arrays into a single-dish mode, MeerKAT will henceforth operate as an interferometer, where different arrays combine light from distant sources, acting as one giant telescope that can produce images with much higher resolution. As Cunnington explained in a recent release from the University of Manchester:

“However, the interferometer will not be sensitive enough to the largest scales most interesting for cosmologists studying the Universe. Therefore, we instead use the array as a collection of 64 individual telescopes which allows them to map the giant volumes of sky required for cosmology.” 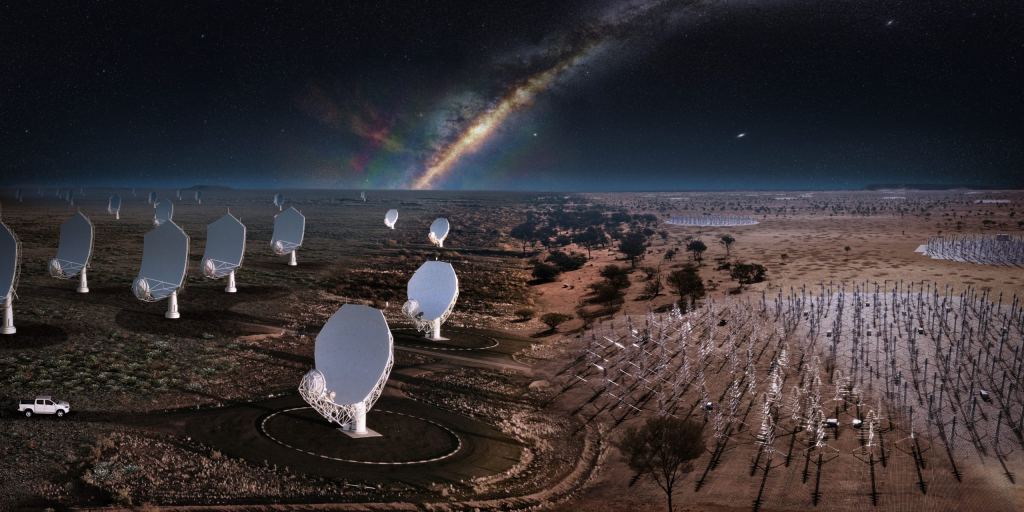 Composite image of the SKA combining all elements in South Africa and Australia. Credit: SKAO

As they indicate in their paper, the new single-dish mode allowed the international team to create radio intensity maps on a clustering of galaxies recently studied by the WiggleZ Dark Energy Survey – an optical survey of galaxies performed by the Anglo-Australian Telescope between 2006 and 2011. By combining the data, they found a strong statistical correlation between the radio maps and the positions of the galaxies surveyed, which demonstrated the MeerKAT’s ability to detect the large-scale cosmic structure and trace the overall matter of the Universe.

In addition to being the first instance where such detections were made using a multi-dish array (operating as individual telescopes), these findings also represent an important milestone in the development of the SKAO. As Cunnington revealed:

“This detection was made with just a small amount of pilot survey data. It’s encouraging to imagine what will be achieved as MeerKAT continues to make increasingly larger observations. For many years I have worked towards forecasting the future capability of the SKAO. To now reach a stage where we are developing the tools we will need and demonstrating their success with real data is incredibly exciting. This only marks the beginning of what we hope will be a continuous showcase of results which advances our understanding of the Universe.”

Further Reading: The University of Manchester

The post 64 Radio Telescopes Come Together to act as a Single Giant Observatory appeared first on newsastronomy.com.